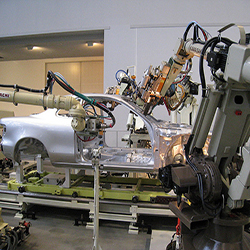 As the third largest producer worldwide, there can be no doubting the importance of the automobile industry to Japan’s economy, and here in Aichi we are at the heart of it. Of particular emincnce is the Toyota Motor Corporation. By production it is the largest automotive producer in the world and it is right here on our doorstep.

Whilst its economic significance to the area is perhaps unrivaled – for the expat community especially, many of whom have commercial connection to the company – its cultural influence is also evident. The cities of Aichi have been developed with motoring in mind, with wide roads, expansive highways and cycling culture centred on pavements and sidewalks. The locals take great pride in Toyota’s strength and history, however for those of us without an emotional or financial connection to the company it may not be easy to understand the affiliation. However, a tour round the Toyota Plant may help.

On the face of it, a trip to an automobile factory doesn’t seem like such a fun day out, but the Toyota Plant Tour is highly recommended. The first stop of the tour, which an be taken in both English and Japanese, is the Toyota Kaikan museum, a gleaming showcase for its new models and technology and, if you are lucky, robotics exhibitions.

From there you will be taken to the Tsutsumi assembly plant where you can see the Toyota concept of jidoka – automation with a human touch – in action. From a bird’s eye vantage point you can see in real time how some of the world’s most famous models such as the Prius, the Scion or Camry come together.

The next step on the tour is the welding area where the car parts are brought together and welded with exactitude and precision. For fans of robotic engineering, this is the stage for you as immense and intricate machines bring the metallic pieces of the automobile together, a stark contrast to the labour-heavy assembly line.

To complete the two hour tour you return to the Kaikan museum where your tour guide can answer any questions you may have and you can enjoy learning about the Toyota Way, with exhibits labeled in English, Japanese and Chinese. Afterwards you can peruse the gift shop, take a break in the Starbucks Coffee shop and even get behind the wheel of the latest cars in the showroom.

If you can’t make it out to Toyota, it is well worth a trip to the Toyota Techno Museum in Nagoya. This excellent tour takes you through the history of the Toyota Company, from its relatively humble beginnings as a textile machinery manufacturer to the modern day international behemoth it is now. It also has exhibitions on the robotics and technologies of the modern car production process, some of which are interactive.

For real car fanatics you can head out to the Toyota Automobile Museum to see a great exhibition of cars from Japan, Europe and the US from the late 19th Century up to the 1960’s.

How much: Free (online reservations required)