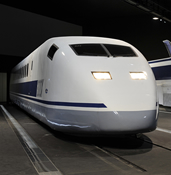 The SCMaglev and Railway Park is a railway and train museum owned by the  Central Japan Railway Company in Nagoya, Japan.  The museum is a new edition to the list of things to do in Nagoya, having opened in March of 2011. The museum features nearly 40 full-size railway vehicles, in addition to a single bus exhibit, several train cab simulators, and a number of railway model dioramas.

This museum introduces the “advances in high speed railway” through rolling stock displays; including the next-generation superconducting Maglev Train due to begin operations in a decade or so.  In addition to displays on trains to come, you will find displays and exhibitions on the history of rail travel and trains, and about over time.

Adults and children alike will enjoy learning about how railway has impacted our society, economy, culture and lifestyle, and about trains generally via “rolling stock displays,” models, and even train simulators that allow you to drive a train!

The experience begins with the first thing visitors are treated to upon entry; actual rolling stock versions of award winning trains including an elderly steam engine, shinkansen (bullet train), and the futuristic vision of a maglev train prototype.  These massive engineering feats are impressive, and the opportunity to get so close to them is incredibly interesting!