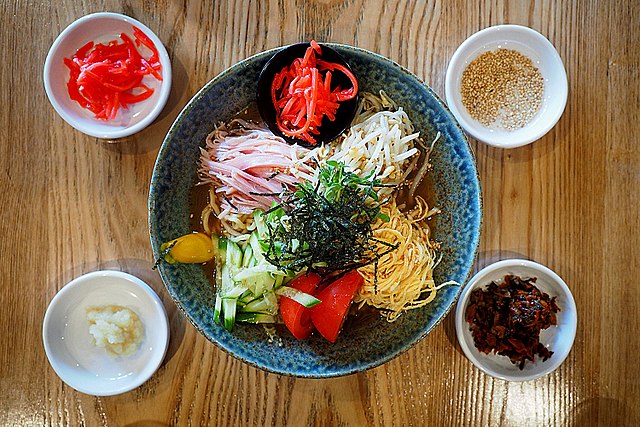 Cold noodles are just what the doctor ordered in the sweltering Japanese Summer! Noodles are an essential staple of Japanese cuisine, eaten by people of all ages in every part of the country. The first bowl of noodles arrived in Japan via Buddhist monks who brought them back from China more than 1000 years ago

Somen are thin noodles that are most likely to be enjoyed flowing down a bamboo chute with ice-cold water. It’s often a community a summer event, and everyone lines the bamboo chute clasping a bowl and scoop the noodles from the water as wash along the chute. And you’ll need all of your focus to fish for your lunch if you want to get your fill! Unsurprisingly, this cold noodle dish is usually enjoyed during the summer months and is natural.

Hiyashi chuka Noodles originated in the Sendai area almost a century ago and became an iconic summer dish throughout the archipelago. It is only served in Japanese restaurants during the summertime; signs announcing “Hiyashi chuka served here” let you know that summer has officially begun. It’s light and refreshing and is the perfect summer choice for people who love ramen but want a more refreshing alternative in the sweltering heat.

Hiyashi chuka is sometimes served with a side of yellow karashi (hot Chinese) mustard. The mentsuyu can be any flavor, but popular varieties include soy sauce-based vinaigrette, Japanese citrus dressings like yuzu and ponzu, as well as sesame-based dressings. The dressing is poured over the ingredients just before eating, and then everything is mixed together.

I’ve covered soba noodles in an earlier article, but you can’t talk about summer noodles without mentioning the most iconic of noodles in Japan: soba.

In summer, they are more often than not eaten as zaru soba – a chilled noodle dish made from buckwheat flour and served with soy sauce-based dipping sauce called tsuyu. The word zaru means “a strainer” in Japanese (which is an elegantly simple platter of woven straw), and the name of the dish was derived from the way the noodles are served over a bamboo strainer during the Edo Period.

But my favorite is cold and hard to beat for a light and tasty repast garnished with fresh, crisp tempura. You’ll find most izakaya or Japanese restaurants serve soba but here are a couple of recommendations:

Hiroshima has its own unique take (spicy hot)

(A chain store with branches throughout the city, I generally go here:)

Image by:  insatiablemunch / CC BY