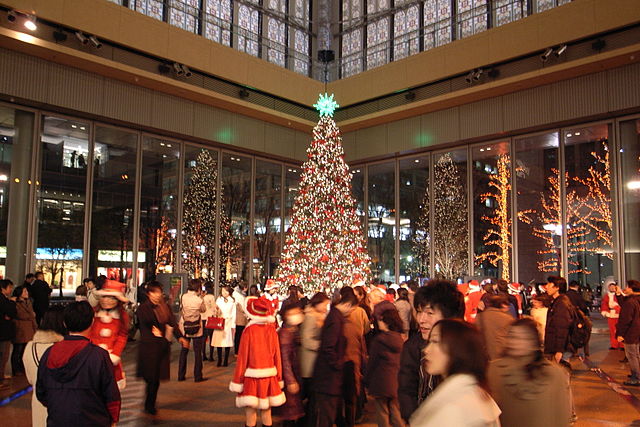 While less than 1% of the population of Japan identifies themselves as Christian, Japanese families still look forward to and enjoy Christmas festivities in their own distinctly Japanese way. Encouraged by businesses and the power of the global entertainment industry, people in Japan largely celebrate a non-secular version of Christmas complete with lights and Christmas trees (though neither at home!).  This version of Christmas is interesting, if less spiritual. Families celebrate Christmas in Japan by eating “Christmas Cake” on Christmas Eve.   Japanese Christmas cakes are different than traditional fruitcake styles favored at Christmas in Western countries. These are usually simple sponge cakes, frosted with whipped cream and often decorated with strawberries, Christmas chocolates, and other seasonal fruits.  Christmas Cakes can be found basically everywhere during the holiday season, even convenience stores!

The cakes are traditionally purchased by the father, on their way home from work.  They come from a variety of places, depending on the family, some buy at expensive department stores, but many come from folding tables set up at stations and sold like bento lunches. The average price for a Christmas cake is probably 2000 yen, but you can spend a lot more if you want.  You can see some sample Christmas Cakes here, at Amazon.co.jp

Some family and friends will exchange presents, but this is a little unusual, except between boyfriends and girlfriends. One of the most distinctive parts of Christmas in Japan is fried chicken.  Thanks to an incredibly successful marketing campaign launched by KFC in the mid-seventies, “Kurisumasu ni wa kentakkii,” this simplified traditional Christmas Dinner has become synonymous with holiday dining here. Officially KFC states that a Christian kindergarten in Japan had the idea to order KFC for its kiddy Christmas party and upped the ante by asking the KFC shop manager to dress up as Santa Claus for the party. He agreed, appearing at the party in full Santa gear, saying, “Merry Christmas” delighting the children. It caught on and gradually, more and more schools ordered KFC for their holiday parties. In 1974, KFC held its first special Christmas meal campaign, and the rest is history. Decades on, KFC’s Christmas has become an annual mainstay, with people growing up eating the fried chicken during the holidays and naturally associating it with Christmas.

From KFC to the grocery store, and even in convenience stores,  it is truly impressive how well the marketing department of KFC has captured the season with fried chicken fever!

Find more info here, at Why Japan is Obsessed with Kentucky Fried Chicken on Christmas

Christmas in Japan certainly has a family component to it, with many families eating cake and chicken, even exchanging small presents, but at its heart, it is a romantic holiday, sometimes referred to as the “3rd Valentines Day” (after the actual Valentines Day and White day). Christmas Eve is traditionally reserved to spend time with one’s significant other in a romantic setting.

One popular holiday experience is strolling through “illumination.” Illumination is roughly equivalent to the western tradition of putting up Christmas lights.  Except that rather than putting lights up on their own houses, cities or businesses will set them up and the people come to them.  This is a very popular event for couples, and many illumination displays are set up and run from November straight until Valentine’s Day.

With this focus on couples quality time, it is very common for fancy restaurants and hotels to be booked solid with these romantic encounters; especially on Christmas Eve, but generally around the holiday as well.  If you want to spend your holiday with someone special, somewhere special, it is highly recommended you start planning as soon as possible!

Whether you’re looking for a full festive party atmosphere or a quiet meal for two, check out our guide to find out what’s on offer. Book early to avoid disappointment!

The most interesting part about Christmas in Japan, however, is widely thought to be the speed at which it all disappears.  All traces of the holiday season will be gone by morning on December 26th. The lights go off, the decorations come down, and the music stops as suddenly as it appeared.  Like magic!!

Want to keep the spirit around a little longer?  How about your own Christmas Tree to liven up the holiday season with trim and presents?  You are in luck, we happen to know a few spots to get one, but stocks are very limited so don’t delay!

The holidays in Tokyo are a bright and colorful affair! If you are looking for decorations, lights, or other holiday materials there are a few good sources you should know about.

By François Rejeté [CC BY 2.0], via Wikimedia Commons
Image screenshot from www.lawson.co.jp/recommend/christmas/cakes.html#cakes
Image by akaitori (Own work) [CC BY-SA 2.0], via flickr.com