The Mazda Museum in Hiroshima – More Than You’d Expect 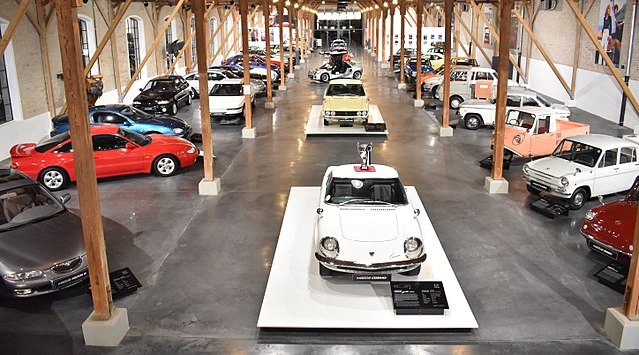 The Mazda Museum in Hiroshima – More Than You’d Expect

Amongst the museums, galleries, and attractions you will find in Hiroshima, perhaps one of the more surprisingly interesting is the Mazda Museum. In fact, it may well be news to you indeed that the Mazda brand originated in Hiroshima and where the Mazda Motor Corporation, founded in Hiroshima in 1920, still retains its corporate headquarters. In addition to the headquarters, Mazda owns a large plot of coastal land which accommodates research and development laboratories, factories, and shipping facilities and museum. The company museum and part of a factory are available for public viewing.

Producing over a million cars a year it’s easy to imagine importance and role that a world-class brand like Mazda plays in Hiroshima’s economy and no less as an innovative player in the Japanese auto industry. For instance, in 1991 Mazda became the first and only Japanese company to win the Le Mans Grand Prix. Continuing efforts to create more efficient vehicles include improving its version of rotary engines.

The Cars of the Past

The museum offers dazzling an overview of Mazda’s history; its first automobile in the 1930’s – a three-wheel auto-rickshaw, displays about putting the rotary engine into the common market, a Mazda racing car that won at 1991 Le Mans 24-hour race is on display and the manufacturing process is explained – the tour passes through an actual vehicle assembly line allowing visitors real-time view of a variety of different car models being produced.

The museum amply gives the visitor and exciting look into the technology of its automobiles and the prospects for its future developments. At the end of the tour, there is a shop featuring Mazda goods which stock Mazda related goods along with products for the Hiroshima Toyo Carp baseball team and Sanfrecce Hiroshima soccer team, both of which are sponsored by Mazda. The tour takes a total of 90 minutes.

Take a local train from Hiroshima to Mukainada Station (5 minutes, 190 yen, frequent departures), from where the Mazda Head Office can be reached in a five-minute walk.

The Mazda Museum has a small shop and information area on the first floor, which stocks Mazda related goods along with products for the Hiroshima Toyo Carp baseball team and Sanfrecce Hiroshima soccer team, both of which are sponsored by Mazda.

The facilities can only be seen on a guided tour and tours of the Mazda Museum and Factory are offered once per day in English and Japanese, except weekends and company holidays. The English tour starts at 10:00 and the Japanese tour at 13:30. The duration of the tours is approximately 90 minutes. The tour is free of charge, but reservations must be made in advance by phone or e-mail and can be made up to a year in advance.

Visitors to the museum must gather at the Mazda head office building and sign in at the front desk. At your tour appointed time, a Mazda tour guide directs the assembled visitors onto a bus and from there onto the museum building on the nearby grounds of Mazda’s Hiroshima Plant.