Into the Great Outdoors in Hiroshima City 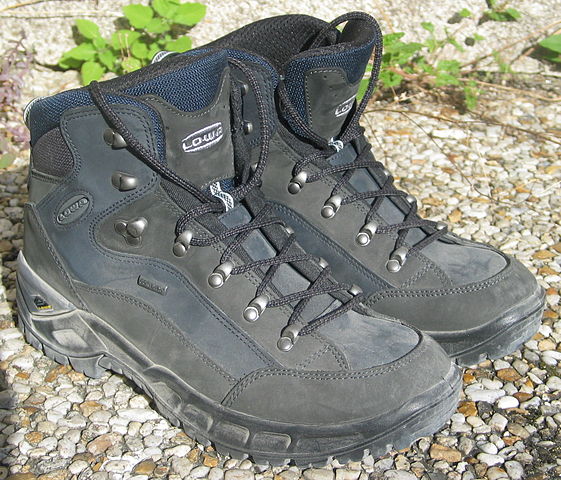 Into the Great Outdoors in Hiroshima City

It’s all very well to have everyone self-isolate, and aside form short trips to the supermarket you really ought to get out a bit or turn into one of those subterranean dwelling creatures form that wonderful HG Wells story, the time machine. But I digress.
Probably one of the few viable opportunities for going out but keeping a distance from other people is a good long walk or better yet, some hiking. There are several good low impact hikes around Hiroshima.

If you like the outdoors and fall into one of these categories:

• are new to hiking, that is, inexperienced;
• don’t have a great level of fitness;
• want to take your kids on a hike with you, but don’t plan on carrying them or
• have exhausted all other hiking trails around Hiroshima

then hiking Mt. Mitate and/or Mt. Ushita or the Peace Pagoda hike are for you. In other words, they an easy, suitable for people of any age and any fitness level.
Mt Ushita it’s easy to access as it’s right behind Big Wave, which you can reach via the Astram Line (Ushita Station).

When you leave Ushita Station, head towards Big Wave through the park at the front of it. On the right of the building, you’ll see a small access road leading up to an open-space grassed car park. Cut across the grass and make your way up the stairs at the end of the road. You have to use your leg muscles to get up the hill, but if short, little legs can do it, you’ll be just fine!

You’ll reach a rose garden (and the first lot of toilets) which is also a picturesque stop either on the way up or down. Following the road past the garden, you’ll come to the second set of toilets. My advice is to go here, especially if you have children because there’s nothing available after that.

Head up the road to the left and across the bridge to the actual trail. The steps may be steep, but they’re well maintained. As an Aussie who’s used to beating her way through bushland with little or no tracks, Japanese hiking doesn’t seem like hiking, especially when there are man-made steps along the way. Still, it’s sort of nice, in a way.

You’ll eventually reach a sign with some very steep stairs. Go up the stairs and then choose either the left route to Mt. Ushita or the right one to Mt. Mitate. Although both mountains aren’t particularly high, 134.9m (Mitate) and 260.6m respectively, the view from the top is well worth it.

The gazebo at the top of the very steep stairs is a good place for a picnic lunch and the view, even from there is lovely, as it looks over Hiroshima and out to the islands.

At 1.5km each way, it’s an easy option to get some fresh air and exercise without wearing yourself (or the little ones) out, too much or if you want to stretch it out and do both Ushita Yama and Mitate Yama double that distance.

Everyone has noticed the Peace Pagoda up on the hill to the north of the station. Most of the hike is on-road through the neighborhood but very pleasant and also low impact.
By Docteur Cosmos (Own work) [GFDL or CC BY-SA 3.0], via Wikimedia Commons
The “trail-head” for a walking route to the Peace Pagoda on Mt Futaba (139m) is about 400 hundred meters from Hiroshima Shinkansen Station. It takes you through a primordial forest, a tunnel of torii gates and rewards you with great views over the city of water and out over the Inland Sea. 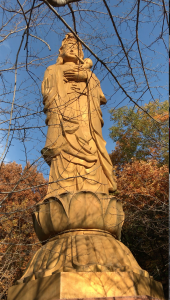 One more lightweight but pleasant walk is also found in Ushita.

At the base of Ushita-yama, there is a Buddhist temple and pet cemetery. The temple is easy to see from anywhere along the aforementioned “Ushita Alps” you can see a large, golden Kannon statue standing prominently at the foot of the Ushita-waseda area of the mountain located in the grounds of the temple. If you climb up to the temple grounds, you discover many other interesting statues and a small, well-kept pet cemetery.

Kannon is the deity of mercy in as well as the Jizo deity is the other most important of deities in the Buddhist teachings, and actually Canon cameras took its name from this. You may see a range of different looking statues throughout Japan but one thing in common is that she usually has children at her feet. This particular Mizuko Kuyo Kannon figure is devoted to helping the souls of lost children find their way and its use dates back to the 14th or 15th century AD. At the base of the statue and in her arms, you can see the babies she protects.

Mizuko Jizo guardian statues. Below the statue, there are also many Mizuko-Jizo Bosatsu statues with their red bibs who are said to also play the same guardian role for children who have died too young. According to the belief, children who die too young did not have enough time to build up karma, so these guardian statues are erected in hopes that they do not become angry, hungry spirits. If a child is lost in any way, including abortion, families can pray to these statues for their protection and ease their remorse.

The route is quite literally a stroll through Ushita-Waseda neighborhood and not easily explained except that if from Ushita rotary pass the Daiso and head straight up that road as far as you can go and turn right. From there you will see the Towering Golden Kannon statue and be able to make your way to it.

By DocteurCosmos (Own work) [GFDL or CC BY-SA 3.0], via Wikimedia Commons