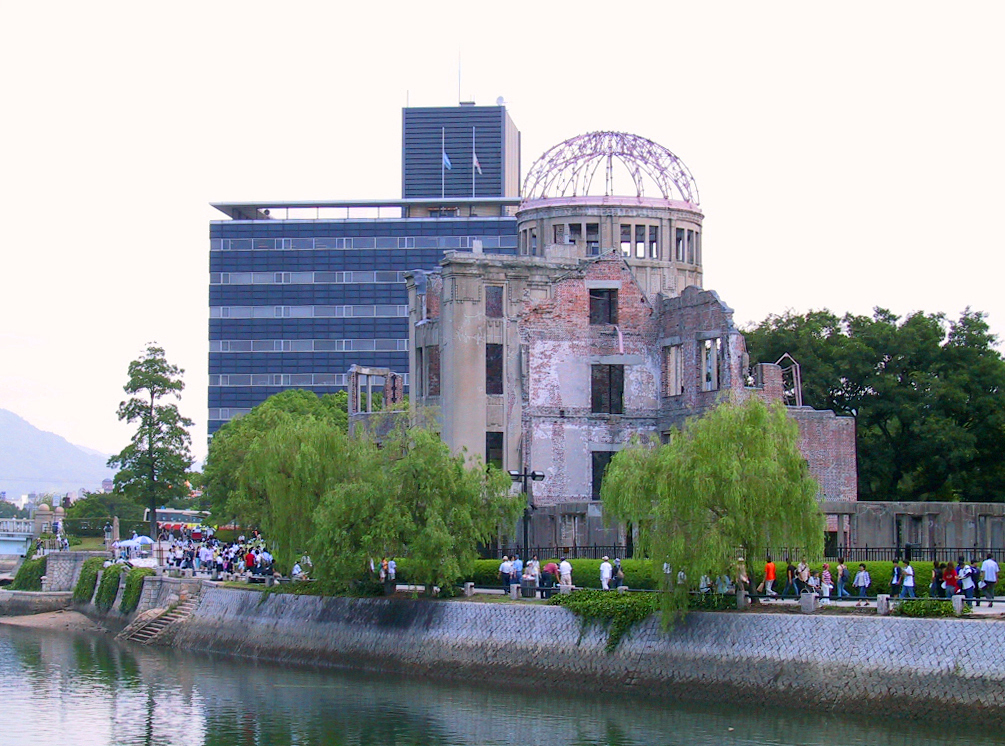 Peace Memorial Park stands as a silent appeal for the elimination of all nuclear weapons and a plea for world peace. This part of Hiroshima was a bustling center of commerce for 240 years beginning in 1603 with a steady stream of goods arriving by boat on the Ōta River. In the Meiji era that took root in 1868 this urban district morphed into the political guts of the prosperous city. The Prefectural Office was built here and City Hall as well.

All that ended on August 6, 1945 when the world’s first atomic bomb was exploded directly over the Nakajima District.

By the summer of 1945 Germany and its European Allies had been defeated but Japan fought on. American leaders calculated that the only way to bring the war to an end in the Pacific was to invade the Japanese homeland at the cost of tens of thousands of Allied lives. The alternative was the A-bomb, untested in actual warfare.

Hiroshima was chosen as the target instead of Tokyo since the city had not yet been bombed so the damage caused by an atomic strike could easily be measured for its effects. Also, Hiroshima was populated with a high degree of intact military targets such as factories and concentrations of troops. The lives of an estimated 6,500 people in the blast zone of the Nakajima District were exterminated instantly; the war was over in days.

The Hiroshima Peace Memorial City Construction Law was passed on August 5, 1949, the four-year anniversary of the destruction. The law stipulated that rather than being rebuilt, the Nakajima District would be forever more “peace memorial facilities.” Peace Memorial Park, created by Kenzo Tange who won a design competition, opened in 1954.

The grounds feature more than 50 monuments and memorials in the form of bridges and fountains and statuary. The A-Bomb Dome contains the wire framework of the Hiroshima Prefectural Commercial Exhibition Hall that was constructed in 1915. The atomic blast detonated almost directly overhead vaporized the building and all the people inside but the straight angle left some walls standing. The framework of the dome-shaped building has been preserved as the city’s most poignant symbol of the explosion.

On the south edge of Peace Memorial Park are a short parade of buildings that include the East Building and Main Building of the Peace Memorial Museum and the International Conference Center Hiroshima. The museum (a descriptive leaflet is available in ten languages) presents the history of Hiroshima and remembers the fateful bombing in exhibits, statistics and newsreel footage in this solemn site. The theme of the exhibitions is the city’s recovery and steps that are necessary for the abolition of all nuclear weapons.

Peace Memorial Park is open anytime to study and contemplate the monuments. Spring is a popular time to visit when the grounds are awash in cherry blossoms. The museum closes at 17:00 in the winter and 18:00 most of the rest of the year. Guided tours are given regularly for both the park and the museum.