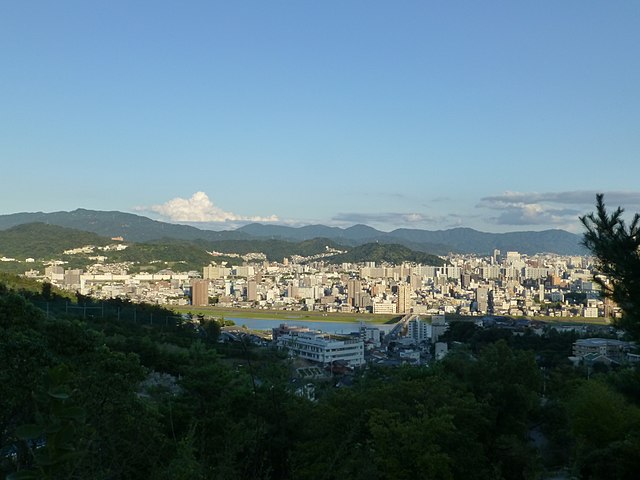 The best hike within Hiroshima City is a great bush hike to the summit of Mt Mitaki on the outskirts of the city. Mt Mitaki is best known for Mitaki-dera (三瀧寺), an historic Japanese temple nestling on the mountainside, a very short but entirely well worthwhile journey from Hiroshima city center. The name Mitaki-dera identifies with the three waterfalls midway up from the base of the mountain situated within the temple grounds (the Japanese characters are literally “three” and “waterfall”) and the and the water is used as an offering of water to the victims of the atomic bomb during the Hiroshima Peace Memorial Ceremony.

I suppose you could say that the hike begins from the train station with a 20-minute walk up a steep road from Mitaki JR Station, two stops from Hiroshima Station on the Kabe Line, to the temple entrance. In March and April is lined with cherry trees that enchantingly usher you in. Reaching the temple precinct entrance, you pass the striking two storied pagoda tahōtō and up past a small, rustic-looking teahouse where you can enjoy simple traditional Japanese food. Of course, you could take the easier route of a taxi from Yokogawa Station which should cost around ¥1000 for the 10-minute ride.

In any case, once inside the temple grounds you continue with a pleasant wander along with the stone paved path through the tranquil grounds, passing the waterfalls it’s named for and several other memorials for the atomic bomb victims, as well as innumerable moss-covered stone Jizō statues. Jizo is the protector of women, children, and travelers, and his statues are often seen wearing bright red caps and bibs. Mitaki-dera is very popular amongst locals for sakura (cherry blossom), its veritable blaze of autumn leaves and maples.

As you might expect in a place named after its waterfalls, this place is very green, and as you get closer to the far reaches of the grounds the trees become more and more magnificent. The place feels almost enchanted. It’s one of Hiroshima’s hidden gems, particularly beautiful in autumn, but a place to which one can return time after time whenever in need of a bit of peace and quiet in beautiful surroundings.

Finally, the path leads you up stone steps to the Shingon Buddhist temple that dates back to its founding. Around the back of the temple, you will find the path leading into the forest blanketed mountain rising up behind. Here is where the real hiking experience starts. You may find at the in the first couple of hundred meters that it doesn’t seem clearly defined but it is fairly obvious I think if you keep your eyes open.

The trail is a fairly rigorous steep climb along a track of about 1100m to the 356m high mountain summit through a bamboo grove, but rewards you with a spectacular vista of the city back-dropped by the Seto Inland Sea. Take a picnic lunch. Afterward, if facing the view across the city to your left you will find an alternative track down though not quite as interesting as the trek up is a bit quicker way down – a word of caution, in the reverse this path, if taken on the ascent is far more, rigorous.

Photo by Max Nossin [CC BY 3.0], via Wikimedia Commons