A History of Hiroshima’s Soul-Food, Okonomiyaki 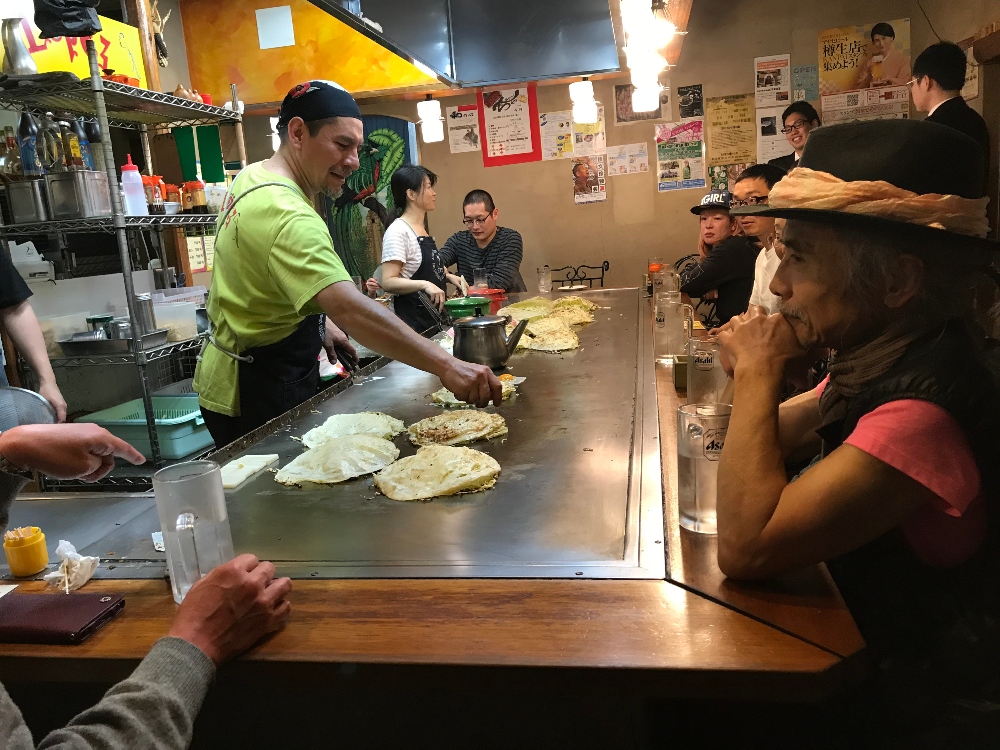 A History of Hiroshima’s Soul-Food, Okonomiyaki

Okonomiyaki (o-konomi-yaki) is often described as a Japanese savory pancake made from a variety of ingredients that includes shredded cabbage, flour, and yam-based batter, meat (generally fresh pork belly) and seafood. The name comes from the word okonomi, meaning “how you like” or “what you like,” and yaki meaning “cooked” (usually fried). Okonomiyaki is mainly associated with the Kansai or Hiroshima areas of Japan but is widely available throughout the country. Toppings and batters tend to vary according to region. In Tokyo, there is a popular version of semi-liquid okonomiyaki called ‘monjayaki.

Its root can be traced back to a confectionary in the 16th century but has evolved into the delicious savory dish of today. The Kansai version is predominant throughout the country and is very much the savory pancake in form. The Hiroshima style (often referred to as Hiroshima-yaki) to my mind (no bias here at all!) is a more elegant version and watching it prepared before your eye is both a bit of a show and a mouth-watering experience. It and has become the city’s signature dish and is a must try on your visit to Hiroshima.

It differs in preparation, but the standard is thus: shredded cabbage and sprouts are loaded on top of a wafer-thin crepe on the hot plate and seasoned.  Then fresh pork belly is layered over the cabbage. While that cooks, noodles are fried up beside it then the cabbage and everything is flipped over intact to cook on top of the noodles while an egg is broken and fried next to it. The whole kit and caboodle is then loaded on top of the egg and flipped back over and garnished with an okonomi sauce (fruit based kind of sweet, thicker Worcestershire sauce), powdered nori, sesame, mayonnaise if you like.  Delicious!

The most well-known store Micchan is credited with inventing Hiroshima ​style okonomiyaki. The shop started in the make-or-break post-WWII years as a food stall selling small crepes stuffed with scallions and wrapped in newspaper. It was a father and son operation, and the 19-year-old son, whose nickname was ​Micchan​, came up with a bunch of ideas to make their product more attractive to customers. Eventually, he came up with the winning combination that was to become known as Hiroshima ​okonomiyaki​. In the post-war years, Micchan worked for the revival of the city in the daytime and sold okonomiyaki at a stand in the evening. He changed the stall name to Micchan so his friends could find him on the street.

When the city regulated against stalls were no longer allowed on the street, Micchan opened his first store in Hiroshima Station Building. Micchan had to travel to Osaka to buy a machine for cutting cabbage, as there were so many customers; it was hard to continue by hand. There are several “Micchan” shops in the city center run by various branches of the family. The main store can be found on the 10th floor, and the elegant décor sets it apart from any other.

Throw a stick in any direction on any corner of Hiroshima, and you may well strike an okonomiyaki eatery. Very popular with domestic and overseas tourists is Okonomi-mura (Okonomi Village) which houses 27 little stalls on three floors. Okonomiyaki-kyowakyoku Hiroshima-mura (Okonomiyaki Republic) has another 6, and Ekimae Hiroshima Okonomi-hiroba (in the south side restaurant floor of Hiroshima Station) has 13 more. Lopez in Yokogawa is another popular venue, particularly as Anthony Bourdain gave it his rubber stamp of approval. Fernando Lopez is credited with introducing jalapeno as a garnishing. I hardly eat it anywhere else (unless I go to Itsukushima on the 4th floor of Okonomimura)

Other opportunities to enjoy Hiroshima okonomiyaki include the Wood Egg Okonomiyaki Museum at Shoko center west of the city where you can enjoy cooking your own okonomiyaki; see an earlier blog by my colleague Matt Mangan for more details about this. The cook-it-yourself experience is also available at Okosta, a two-minute walk from Hiroshima Station.