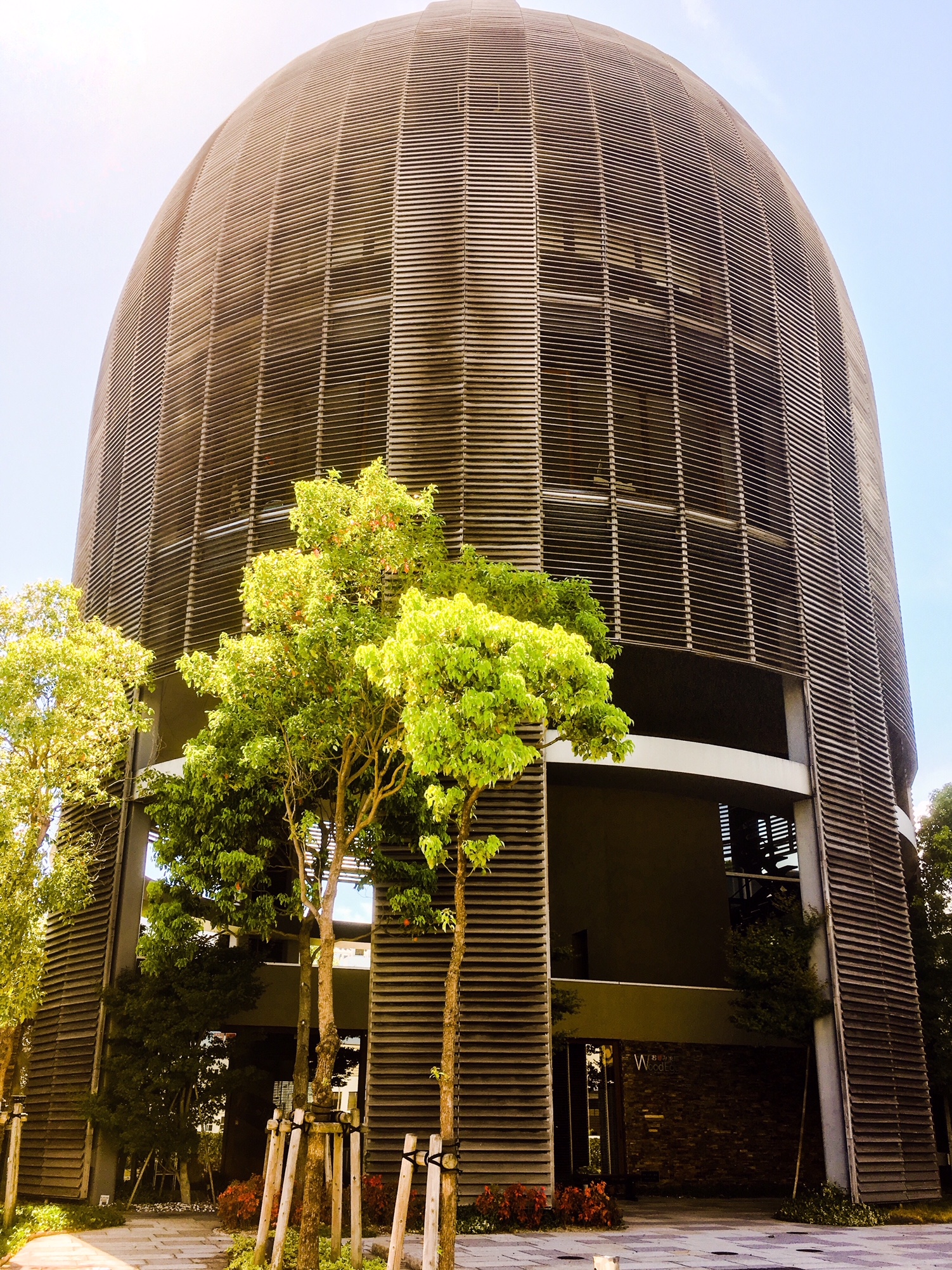 I regularly meet people traveling through Hiroshima. And because my wife has suggested I be friendlier, I ask them what they’ve seen and enjoyed. Most of the answers are unsurprising, but recently a number of tourists have been especially enthusiastic about the WoodEgg Okonomiyaki Museum.

The WoodEgg (yes, one word) is in Sho-ko Center, an industrial district west of downtown. The museum gets its name from the shape of the building, which was completed in 2008 and is, in fact, reminiscent of a very large wooden egg stood on its end. The museum is run by the Otafuku Sauce Company, whose best-selling okonomiyaki sauce (more than 50 ingredients!) is available worldwide.

A quick word about the company. Initially a manufacturer of soy sauce and vinegar, it launched its famous sauce in 1952 to top okonomiyaki, a filling and inexpensive dish that became emblematic of Hiroshima in the years immediately following the second world war. The name comes from Otafuku, a folk character recognized throughout Japan for her fat-cheeked, white face and narrow, laughing eyes. With her tiny, bow lips turned up in a smile, one story is that the character is modeled on a young shrine maiden of the Muromachi period whose homely, charming features could change the heart of the most hardened villain.

Her image was adopted by the sauce to convey a cheery, comfortable image in keeping with the dish. There are other similar sauces on the market, but Otafuku is the most popular and offers assistance to people opening new okonomiyaki shops. Outside Japan, of course, the sauce has found its way into other dishes. Amazon reviewers in the U.S. seem to put it on everything from scrambled eggs to sandwiches.

For the foodie sort of traveler, the main draw of the WoodEgg museum, aside from the building itself, is the sheer range of the tour. Most visitors to Hiroshima end up trying okonomiyaki. Here, you’ll learn to make it yourself. For a very modest price, you get a factory tour, a history lesson, a cooking class, and meal, and finally go home with a souvenir photo and a warm bottle of sauce fresh from the line. The museum, factory tour and a lecture on the history of okonomiyaki are all free.

If you choose to add the cooking experience, it’s 700 yen for the electric griddles (available for groups of up to 20) or 1000 yen for the teppan grill (for groups up to 50). With some luck, or advance notice, English speaking guides are available, and most of the museum’s staff can manage at least some English. A number of visitors have spoken glowingly of how the museum and lecture, in particular, tie the history of okonomiyaki to the story of Hiroshima’s post-war recovery, making the trip every bit as cultural an experience as another shrine visit.

If you’re traveling, it may be easiest to ask your hotel or Hiroshima Station information staff to make a reservation for you and arrange a taxi. The museum is about 15 minutes from the city center. If you’re especially keen, you might allow as much as a half-day for the full experience, from museum and lecture to factory tour to cooking and eating your own meal.

Definitely worth a trip, especially for people with a love for food and/or cultural history.