The Wonderful World of Yakitori – Meat on a Stick Explained 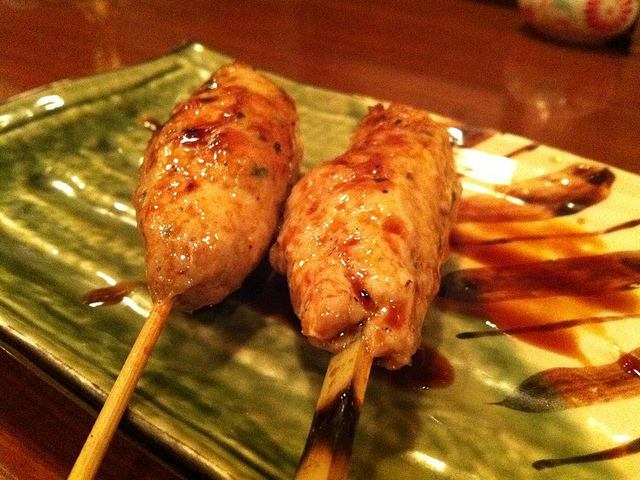 The Wonderful World of Yakitori – Meat on a Stick Explained

Japan is famous for its food, but for some reason, ‘yakitori’ is rarely talked about when we consider classic local cuisine. This is somewhat unfair, as grilled chicken (a pretty literal translation of yakitori) served on skewers いs pretty much ubiquitous at izakayas and yakitori-yas (yakitori restaurants), and goes perfectly with a few post-work drinks.

The problem is that there are so many types, particularly as yakitori is now considered the catch-all phrase for all meats and vegetables served on sticks, making it difficult to know what to order. As such, we have put together a list of some of the more common and delicious yakitori skewers that you can ask your friendly izakaya waiter for.

For the sake of ease, we have stuck to the more traditional chicken skewers, eschewing the more modern pork, beef, cheese, and vegetable varieties. We shall perhaps return to those another day.

As simple breast meat, sasami is a great way to start in yakitori for the uninitiated, as you will find few surprises. If you want to level it up (breast meat can be a bit on the bland side) ask for a little wasabi to create a refreshing sensation. 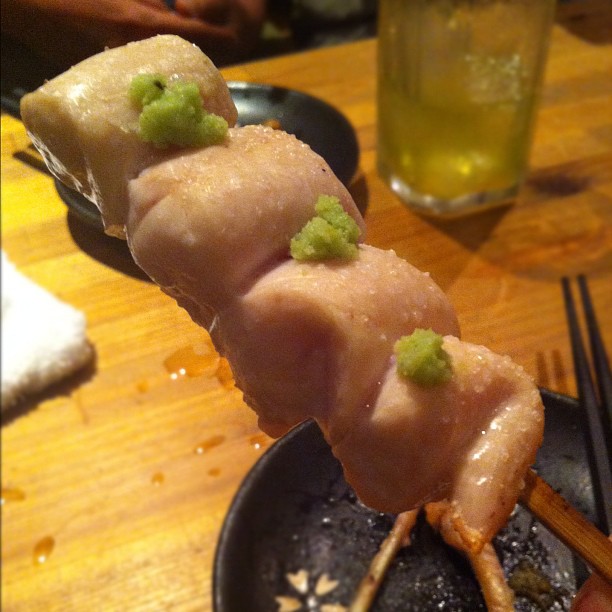 Another recognizable part of the chicken, the chicken thigh is also perhaps one of the most delicious. Soft, tasty and even more delicious when grilled over charcoal. 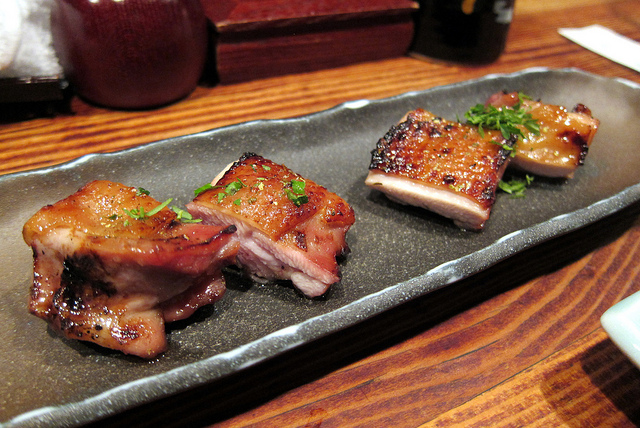 Different places do negima differently, with some using breast meat and others thigh, but whatever the cut, it will also come with grilled ‘negi’, a large Japanese spring onion. Most yakitori-yas will just call this ‘negima’, but you may see some call it ‘tori-negima’ (chicken negima) to differentiate it from ‘buta’ (pork) negima. 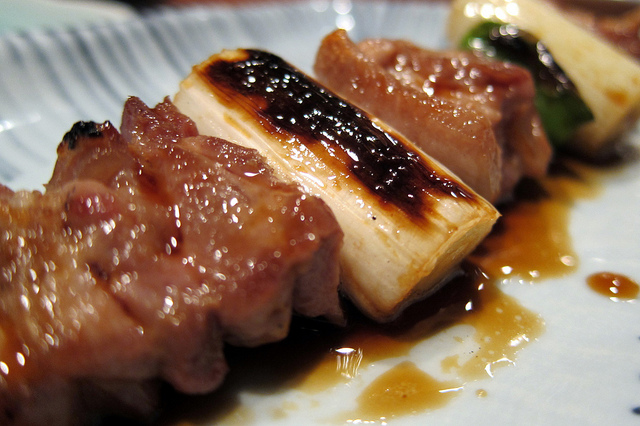 Being a fatty cut of the chicken, the neck is generally plump, with a real ‘umami’ taste. Delicious with a pinch of salt, it’s likely to see juice running down your chin. 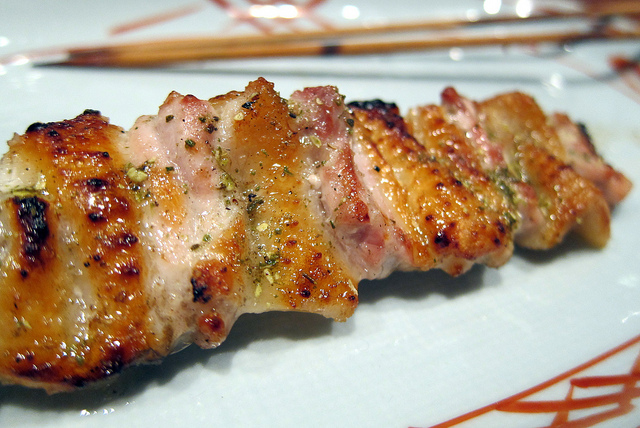 Also sometimes called ‘zuri’ (ずり), sunagimo is the chicken’s gizzard. While that doesn’t necessarily sound too appetizing, sunagimo is surprisingly tasty, with a thick, crunchy texture. Especially good is hasami (はさみ) which is sunagimo in the style of negima. 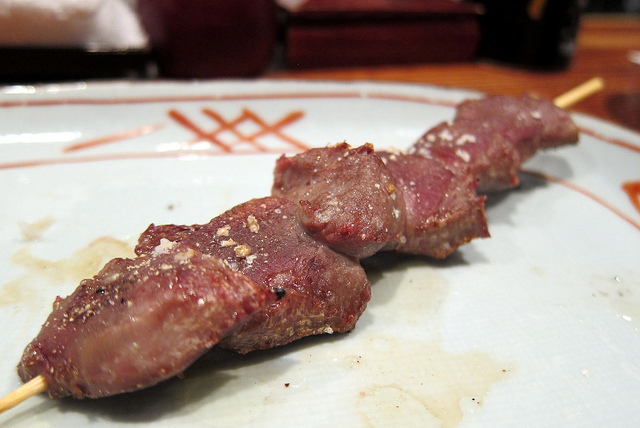 Perhaps best described as chicken meatballs on sticks, tsukune is a standard staple of the yakitori-ya. However, some places do it better than others, and at worst it can be a bit bland and preformed. But when done correctly, especially made by hand and stuffed with shiso leaves, it will be the best dish on the menu.

Another yakitori choice that seems a little off-the-wall, but makes perfect sense when you think about it. When grilled until crispy with a pinch (or a liberal helping) of salt, the chicken skin can be the best bit of the bird. 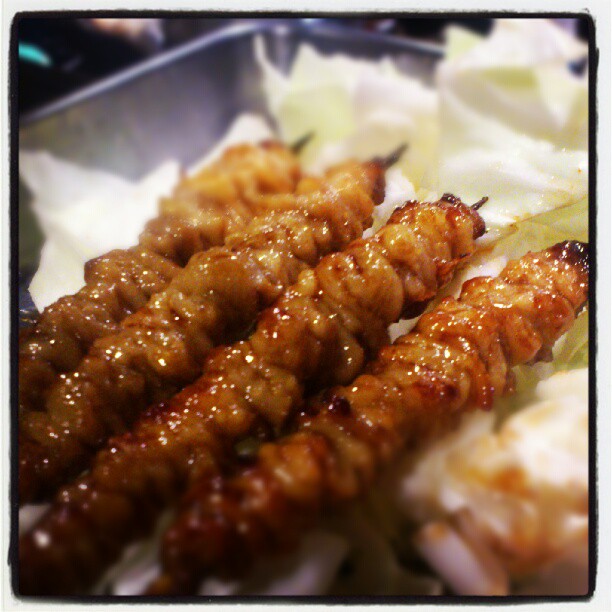 Nankotsu is perfect for those who like a bit of texture in their meal. Something of an acquired taste, the cartilage is the crunchiest bit of the bird (bones aside, of course), and is perhaps at its best when deep fried in the karaage style (唐揚げなんこつ). 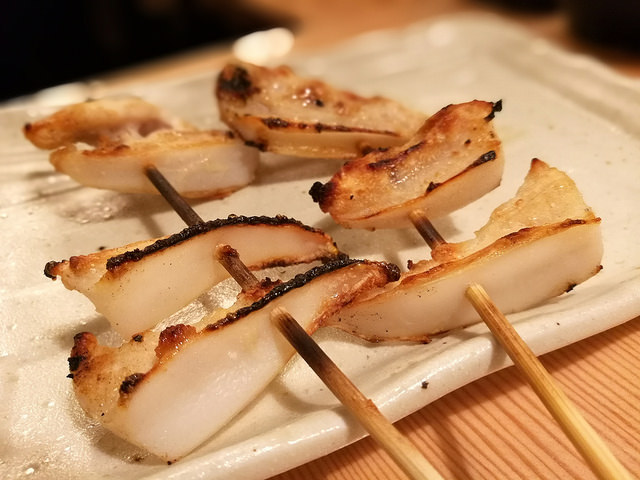 Another one for the more adventurous amongst you, the chicken heart is smaller and crunchier than you would expect and has a really meaty flavor. As its texture succeeds or fails on the chef’s abilities, it is perhaps one best to try at a more upmarket yakitori-ya. 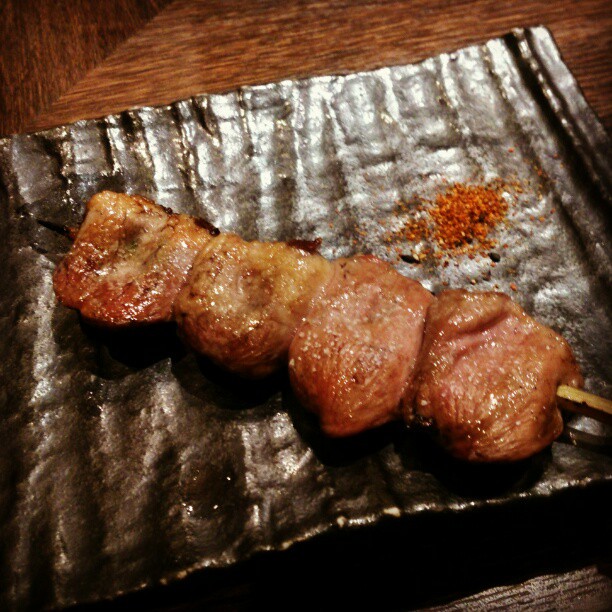 The thought of eating liver probably jolts the inner-child in you with horrible memories, but clear them from your mind. Chicken liver is surprisingly soft and fluffy, with a fantastic umami taste. Though it is another one that relies on a good chef, should you see deep fried liver on the menu (レバーフライ) it should be your first choice. 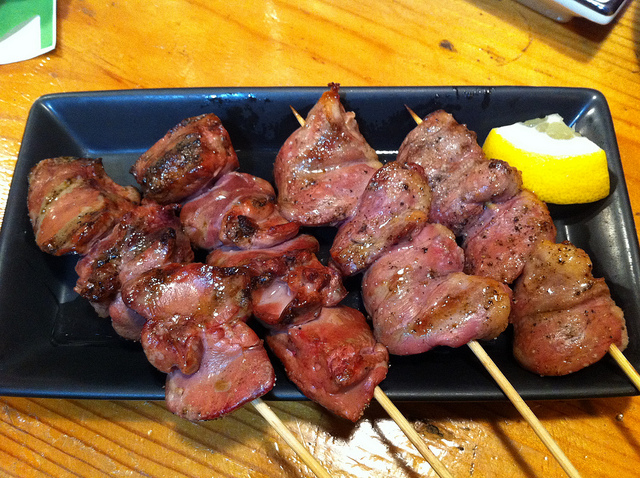 When you make your order, the waiter/chef will most likely ask which kind of seasoning you would like. As a rule, there are two kinds: salt (塩 she-oh) or tare (たれ tah-ray). The former is self-explanatory, but the latter is a salty-sweet sauce generally made up from mirin, sake, soy sauce, and sugar. While there is no incorrect way to enjoy your yakitori, I have included my personal preferences by placing an asterisk beside those with which I prefer tare.

However, if you are still unsure, you can ask your server to make a recommendation (おすすめ oh-soo-soo-may), and some places may have their own special concoctions. If you like a bit of a kick with your meat, why not sprinkle on some spicy shichimi pepper?