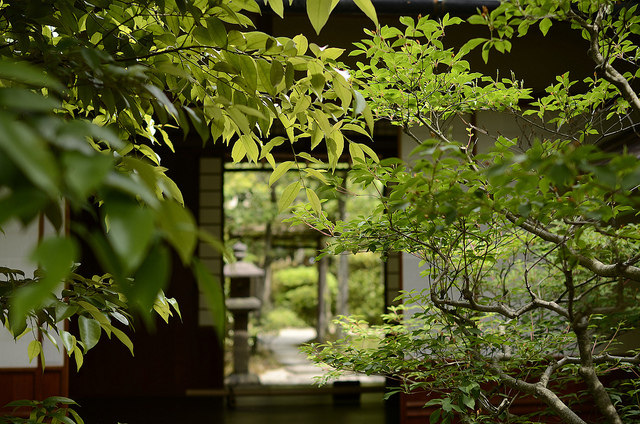 One of the most interesting aspects of the samurai era is how they managed to marry a continual warlike state, enforced by a barbarous ruthlessness with an appreciative joy for the beauty in simplicity of their art forms. Today the city of Inuyama near Nagoya still manages to perfectly illustrate this duality.

Overlooking the city is Inuyama Castle,a Japanese National Treasure and one time home to the feared warlord Oda Nobunaga, the first of the country’s three great unifiers. But just a stone’s throw from that monument to the violent power that the Oda clan held over the region, is a stunning representation of the beauty and transience that the samurai, and the Oda, could demonstrate: Urakuen Japanese Garden and its adjoining Teahouse Joan. Designated a National Treasure in 1936, Teahouse Joan was designed by Oda Urakusai, younger brother to the warrior Nobunaga, and was first built in Kyoto in 1618 in the grounds of the Kyoto temple Kennin-ji. Urakusai, a great enthusiast for the tea ceremony who would renounce his own violent past, was a disciple of Sen no Rikyu, Japan’s most famous tea ceremony master, and in accordance with the strict rites and aesthetics of the Tea Ceremony, the teahouse is of a simple design. It has low, wooden shingle roofs and clay-clad bamboo lattices, and peering inside you can see a number of unique ‘fusuma’ paper sliding doors, as well as an ancient lunar calendar. Classic, elegent, strikingly simple, it is considered by many to be a masterpiece of teahouse architecture, and one of Japan’s three finest teahouses.

Befitting of the home of such a charming representation of a nation’s cultural heritage, Urakuen Japanese Garden garden is designed with the aesthetic of the tea ceremony in mind. Named after Urakusai himself (the name roughly means Uraku’s gardens) like the teahouse Urakuen it is imbued with the concept of beauty in simplicity. Wandering along the stone-paved paths that cut through bamboo groves, you can feel the calmness and serenity that is associated with one of Japan’s most famous art forms. As well as the Joan Teahouse there are other buildings of interest within Urakuen. Based on designs of another Urakusai teahouse, Genan Teahouse is a restored building created in the ‘teishudoku’ form. If you want to actually take part in a ceremony for yourself (unfortunately this is not possible in Joan, due to its National Treasure status), Koan Teahouse is open for seasonal tea parties. For visitors all year round, at Syodenin Shoin, a building in which Urakusai spent much of his later life, you can enjoy drinking green tea on the veranda and eat delicious Japanese sweets unique to Urakuen, all served on locally made china.