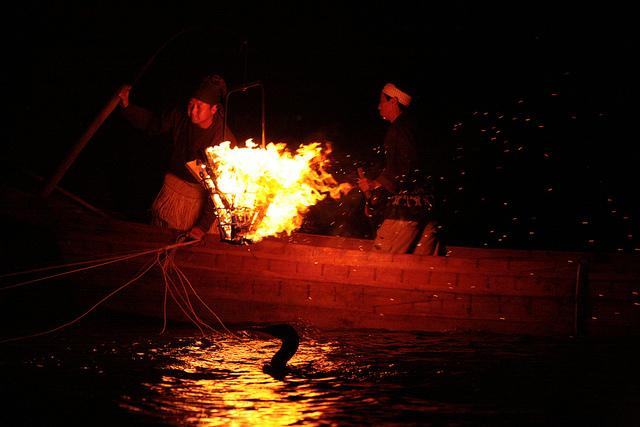 Whether your fish comes from the supermarket or you are a master fisherman who has trawled the seven seas, it is unlikely that you have ever witnessed anything quite like ‘ukai’ cormorant fishing.

Ukai is an ancient form of fishing in which master fishermen, ‘ushō’, use trained Japanese cormorants, ‘umiu’, to catch fish. Fishing predominantly takes place at night, when the ushō paddles his 13 meter long ‘ubune’ boat down the darkened river, lit only by a flaming basket that hangs from the helm. Then with the fish – mostly Ayu, a sweet fish delicacy – attracted to the blaze, the fisherman releases his gulp* of cormorants into the water.

The large birds are tethered by a cord to the fisherman’s wrist at one end, and to a ring around its throat at the other. The ring is large enough that it can feed on smaller fish but, importantly, restricts its ability to swallow the larger ones, meaning it returns to the boat releasing the fish up to six at a time into the fisherman’s catch before diving once more. This does sound like a somewhat cruel practice but the birds, which often live in the ushō’s home, can live for up to 20 years, four times that of cormorants in the wild.

The tradition has been enjoyed for many generations and is so indentured in Japanese culture that it has given rise to the phrase ‘unomi’, to swallow like a cormorant, and thus to accept something without question.

History of Ukai in Gifu City

Initially the practice was simply a way of fishermen to feed their families, but soon an industry grew along the Nagaragawa, with processing factories enabling the catch to be sold to customers at great distances. Eventually, however, as industrial fishing practices developed the need for cormorant fishing declined. It does continue to this day, with the Imperial titles being passed from father to son, but it is predominantly a tourist draw.

Watching the Ukai fishermen was a popular pastime of feudal era lords and has continued to be so throughout recent history, enthralling thousands of people down the ages including the famous Edo period poet Matsuo Bashō, and British silent movie star Charlie Chaplin. For many Japanese, the viewing of ukai is considered a rarified experience, and if one can claim to have watched the ancient skill, they will be held in high regard.

As well as watching the fishermen at their trade, the experience is one to be enjoyed at leisure, with food and drink, as if one were at a dinner show of performance art. Which, in some ways, you perhaps are. The ukai season runs from May 11 to October 15 – except on days of heavy rainfall and on the night of the Harvest Moon – and on every night from 18:15 (or 18:45 on weekends) you can witness this ancient festival in one of two ways.

By Boat: Perhaps the best way to see the action is by boat, floating down the river alongside the 13 metre long ubune, giving you a fantastic up-close view of the birds in action. Some boats, which can be organised through the Gifu City Ukai Boat Office or nearby hotels, include a dinner service, while others allow you to bring your own food and drink (I can recommend getting takeaway from the nearby Chinese restaurant).

Nagaragawa Promenade: If you do not want the expense of the tourist boats, or are restricted by time you can view the ukai from the Cormorant Fishing Viewing Zone on the Nagaragawa Promenade. While this does not gain you such great access as the boats, it is free, and you are able to come and go as you please. While not as famous as Gifu, ukai has existed along the Kiso river in Inuyama for just as long. If you wish to view it here there are tour boats available from June 1 to October 15, including daytime visits that are, while not quite so spectacular, much more convenient for those with smaller children.

*There is, perhaps, no collective noun more appropriate than a gulp of cormorants!