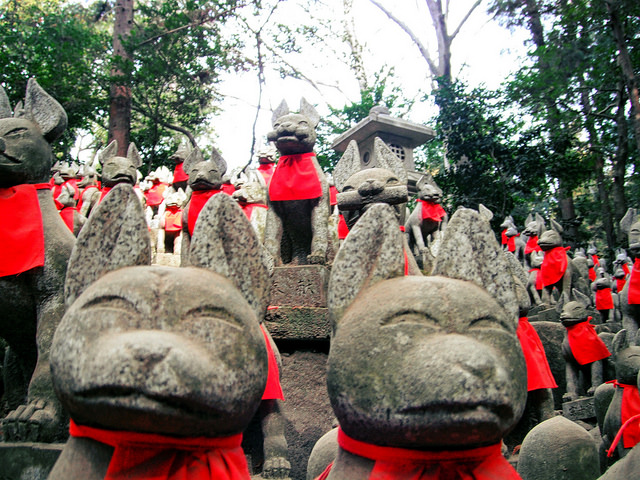 About 75 minutes from Nagoya, in the Mikawa Bay region, you can find Toyokawa Inari, one of the most unique and unusual places of worship in the area.

Along with Kyoto’s Fushimi Inari and the Yutoku Inari Temple in Saga Prefecture, Toyokawa Inari is considered one of Japan’s ‘Big Three’ Inari Temples, but even such an impressive claim to fame is to belittle the importance – not to mention interest – of this extraordinary historical landmark.

The Duality of Toyokawa Inari

Established by the monk Tokai Geki in 1441, Toyokawa Inari is uncommon in that it is not only a Sodo sect Buddhist temple, but also a Shinto place of worship. While the duality of shrines and temples was once commonplace throughout Japan, during the Meiji era reformists decreed that places of worship were to be devoted to one or the other. Toyokawa Inari, however, escaped this fate, and today it retains many aspects of Buddhism as well as enshrining Inari Okami, the Shinto god of fertility, agriculture and success. Toyokawa Inari covers a sprawling 1,272 hectares, the entrance to which features a huge 4.5-meter-high door crafted from a single slab of wood, and you are welcomed by both a Shinto torii gate and a pair of fierce Buddhist Nio temple guardians.

Although most of the temple was rebuilt in the Meiji period or later, the Sanmon dates from 1536 and is the oldest existent building in the complex. Elsewhere within the grounds you can find the temple’s Treasure House, which includes a statue of the god Jizo Bodhisattva, and was crafted in the Kamakura era and later designated as Important National Cultural Asset. As well as the statue there are a number of interesting artifacts, including scrolls, folding screens and an ornate wooden palanquin for use by a noble woman.

But perhaps of the greatest interest is the foxes.

The foxes of Toyokawa Inari

Once you have offered your prayers to your faith of choice, or simply marveled at the impressive structures, follow the path down the steps to the right of the main shrine. Here you will find Myogen Temple, which houses the effigy of the Thousand-Handed Senju Kannon, a sight that most of the shrine’s six million annual visitors miss.

From there, pass through the sacred copse and behind the Okuno-in pavilion, along the winding paths lined with flags flown as offerings. Here you will find the Reiko-Zuka, a hillside covered in red-bibbed stone foxes. As well as being the god of prosperity and agriculture, the aforementioned Okami Inari is also the god of foxes, as the pure-white animal is considered to be Inari’s messenger. At Toyokawa Inari you will find literally thousands of fox statues of varying sizes throughout the grounds.

Inari was also seen as the protector of warriors and merchants, which has over the years brought a number of visitors of great note, with the likes of Oda Nobunaga, Imagawa Yoshimoto, Toyotomi Hideyoshi and Tokugawa Ieyasu amongst many the many others who made the pilgrimage to the Toyokawa Inari to pray for victory in battle. But it is not only samurai who visit Toyokawa Inari. Today, many people come in order to pray for good fortune, prosperity and success. Or they just come to look at the foxes. One reason is as good as another to discover this unique structure of mysterious beauty in the south of Aichi.

Where: Aichi-ken, Toyokawa-shi, Toyokawachō (map)
Getting there: Take the Toyohashi bound train from Meitetsu Nagoya Station . At Ko Station, change to Odabuchi Station. The shrine is a three-minute walk from there.