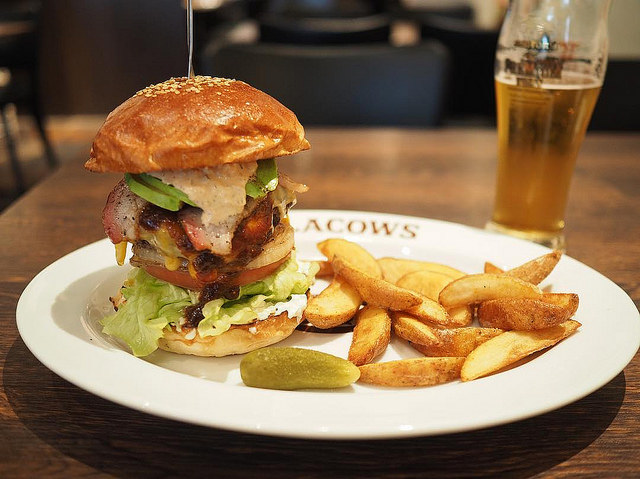 Japan is well known for having some of the world’s finest cuisine, and living in the capital means that you have a great opportunity to try some of the best it has to offer. However, sometimes you find yourself jonseing for something that has a little bit more of a taste from home. What better to scratch that itch than with a juicy, tasty burger? Fortunately Tokyo has many fantastic burger joints that capture that evocative flavor of the good old U.S. of A. Below are a few of them.

While this list is in alphabetic order, were it not, there is a still good chance that Blacows would have topped it. Named after the A5 Japanese Black Wagyu beef from which these burgers are made, this is an American style burger joint but as the meat is flavored with a touch of ‘yakiniku’ sauce, it retains a hint of of Japan. Something that isn’t Japanese is the portion size. These burgers are huge, and the meat is not only top draw, but also carved and ground by hand, in-house. Considered by many to be the best burger in the city. Blacows does have some competition for the top tier title. Despite the less than imaginative name, Burger Mania is a superlative burger restaurant. There are three stores bearing the name (in Shirokane, Hiroo and Ebisu), but just because it is a chain, don’t lump it in with the likes of Freshness or Mos. This is the avant-garde grandee of burger joints, with esoteric choices including a blue cheese burger topped with Roquefort and gorgonzola and a platinum burger made with sliced wagyu beef. But perhaps the biggest fuss is made over the cream cheese and cherry burger. Sounds insane (maniacal, perhaps?) tastes divine.

Editor’s note: I had a “salty peach burger” here that was amazing. Styled as a southern Californian diner with a shiny, sophisticated decor, the queue that you are likely to meet as you arrive at The Great Burger speaks for its prime location but is also a testament to the superlative service, and the high quality of the burgers themselves. Everything is cooked to order and made with the finest ingredients. The menu itself comprises of a combination of the classic as well as some great original burgers. The more adventurous may want to try the mango burger or perhaps the Japanese beef burger served with wasabi sauce and fresh avocado. This restaurant is by no means just a clever name. The name may conjure up high rise cocktail bars, glitz and glamor, with James Bond sipping on his incorrectly monikered drink of choice (a shaken Martini is actually called a Bradford, fact fans), and the sleek and chic interior of Martiniburger does not disappoint. Owned and operated by New Yorker Eliot Bergman, it is a venue that caters to the upmarket lunch or post-work crowd, serving top of the range premium burgers. The originally created burgers are named after well-known New York districts such as the Brooklyn Burger, the Fifth Avenue, and the Little Italy, the latter of which is appropriately ‘piccante’.

They say that from the smallest acorns do giant oaks grow, but here it is a case of from little vans do extremely popular burger joints develop. Going from the eponymous shack (well, a van) in the space of just a few years to two increasingly larger shops, Munch’s Burger Shack deserves its popularity. With 100% premium American beef, the patty meat is carved in-house, chopped, pounded with hammers before being minced. The result is multi-layered multi-flavor patties, so good that it’ll make you scream! (Geddit?)