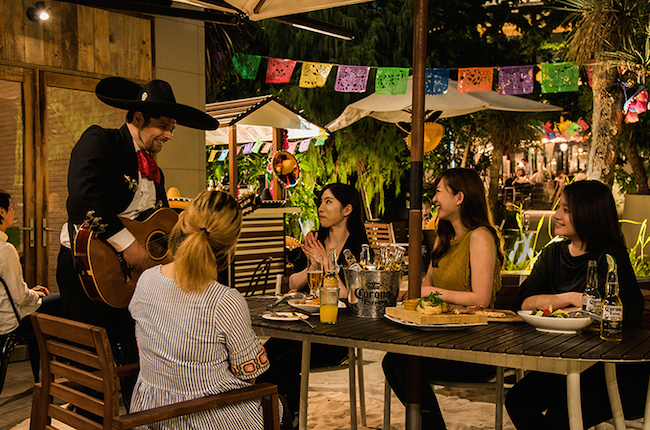 It could be argued (by me at least) that one of the greatest things on Earth is sitting outside on a warm day with an ice cold beer. Thankfully the city of Tokyo is blessed with a plethora of  beer gardens adorning its free spaces and atop of many of its buildings.

However, the chances are that by this time of year you may be sick of the regular beer gardens that adorn department store roof tops and are looking for something a bit more interesting. Well as it happens, Tokyo has a few beer gardens that are a little out of the ordinary. Here are a handful worth checking out this year (2017).

Of course the most important thing about a beer garden is the beer, right? But sometimes that is the problem, because most places just do the regular stuff: Kirin, Asahi, Saporro and Suntory. Well this year at Ark Hills you can enjoy the evening sippng on craft beers from Nagano Prefecture’s well-known Yo-Ho Brewing Company. Choose from six of their great beers – including Tokyo Black, Suiyoubi no Neko, the eponymous Yona Yona and a limited-edition Ark Hills Ale, made just for the occasion. But get in quick, as September 3 is the last day!

So, craft beer isn’t alternative enough for you? How about Japanese ‘matcha’ green tea beer? Yes, it sounds strange, but Green Tea Restaurant 1899 Ochanomizu in Chiyoda is doing just that. You can choose from standard green tea beer, green tea dark beer, hojicha (roasted green tea) beer and two types of Japanese black tea beers. If you find yourself unable to stick to the tea for the two hour all-you-can-drink course there are more recognizable choices in Suntory Premium Malts and Asahi’s Kuronama black lager as well as non-alcoholic options including non-alcoholic green tea beer. Note, food is not included in the 3,500 JPY course price.

Want to lounge on the beach sipping on ice cold Coronas while the Mariachi band serenades you, but can’t get the time off to go to Mexico? Well don’t worry, because Yoyogi Village Beer Terrace has got your back. Down on the complex’s imitation beach is a ‘Mexican Summer’ themed beer garden which dishes up classic Mexican cuisine like tacos and tortillas as well as not-so-classic Mexican fare such as Mexican Pizza cooked in a stone bake oven. Drinks include the aforementioned Corona as well as margaritas and frozen mojitos.

Now we are getting into the more upmarket side of the beer garden. The sumptuous Palace Hotel this summer is opening its terrace so that one may escape the general hoi polloi of the beer garden crowd. At 7,000 JPY for two hours it is quite a bit more expensive than most beer gardens, but it more than makes up for it in its surroundings, and the extensive menu is nothing to be sniffed at either. Feast on brochettes (skewers) of prawn, lamb, sausage and tandoori chicken as well as salads and hummus as you enjoy your glass of sparkling wine, beer, sangria or cocktail. Or why not go all out, and plump for the Laurent Perrier champagne course at an extra 5,000 JPY per head.

Maybe, at the end of the day, you’re just not that into beer. Well, in that case you should head over to Tokyo Tower where they will be reopening their Highball Garden on top of Tower Foot Town. They have an extensive list of highballs, and a food selection that includes katsu and karaage as well as an all-you-can-eat Jingisukan lamb course. Two hours of drinks and jingisukan will set you back 4,500 JPY if you’re a man and 500 JPY less if you’re a woman. Oh, and they have beer there too.

* Most of these, for a set time and cost, will offer an all-you-can drink ‘nomihoudai’ service along with food. Check websites to see what different menus they have.