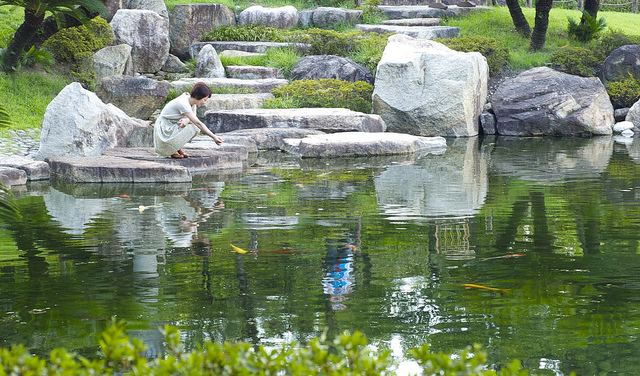 In the eastern suburbs of Nagoya, not far from the transport hub station of Ozone, lies Tokugawa Park, an oasis of serenity that is often overlooked by tourists and locals alike. That it is so overlooked is a shame, yet it can be very much a blessing, meaning as it does that when you visit you may have the place pretty much to yourself, and it retains its peacefulness and tranquility.

Following the shogun Tokugawa Ieyasu uniting Japan in the early 17th century, those who bore his family name found their wealth and power grow exponentially in the coming years. Family members of the Owari Tokugawa, to which Ieyasu had the closest links, became the most senior of the Tokugawa houses as it governed the Owari Domain from its center of power, the newly built Nagoya Castle.

With years of prosperity cemented, in 1695 the retiring Owari lord Tokugawa Mitsumoto looked to build a vast residential retreat away from the castle grounds at where he could live out his days in comfort. The location for this rural getaway spanned some 44 hectares, and takes up much of what is now known as Ozone. In the 1930s the then head of the Owari clan, Tokugawa Yoshichika,decided that “the time had come to present the property to the community”. However, one stipulation for the return, through The Tokugawa Reimeikai Foundation, was the creation of a museum and public park. Though the park was mostly destroyed during the bombing raids of World War 2, it was reopened in 2004, and this area has become Tokugawaen, or Tokugawa Garden.

A hidden oasis of calm

While just a fraction of what the park had once been, Tokugwaen is a beautiful representation of how samurai life may have looked. Though the Ryosenko Lake is no longer large enough to hold a 16 oar boat as it had been in its prime, it still forms the centerpiece of the garden, and it is filled with large, multi-colored koi carp that are so tame that they come to the waters edge to greet visitors.

Feeding the lake are tributary streams and creeks, the trickling of which adds to the serenity as you wander along sun dappled paths, duck beneath overhanging branches and explore stone footbridges that lead to small waterfalls and beautiful rock formations.

Throughout the park there are enchanting gardens of various seasonal flowers, making it a charming area around which to perambulate no matter the time of year. However, it is perhaps most popular in both the autumn, when the maple leaves turn a vibrant red, and from February to April, when the park comes alive in all shades of pink with the blooming of at first the plum blossoms and then the cherry blossoms. Rather than being a site for raucous hanami parties, it is instead an idyllic spot in which to enjoy the colors of the spring season in peace.

An Unrivaled View of a Shogun

At the southern end of the park you can find Tokugawa Art Museum, Japan’s fourth oldest privately-endowed museum, and while it may not be one of Nagoya’s most famous, it offers an insight to the world of the samurai rulers like no other.

With most of the artifacts on display donated by the Tokugawa family along with the park grounds, the museum’s exhibits offer the visitor a perhaps unrivaled understanding of the shogun Ieyasu. The exhibits include ten National Treasures amongst the priceless collection of art objects, furnishings and heirlooms, as well as swords, armor, Noh costumes and lacquer furniture. However, perhaps the most important artifacts in the museum’s collection are the extremely rare sections of the early 12th century illustrated Tale of Genji, some of the oldest of their kind remaining in Japan.*

For visitors interested in literature, there is a further wealth of information in the nearby Hosa Bunko library that houses a huge collection that has been passed down through the generations of the Owari Tokugawa family. The most fascinating part of this is the more than 3,000 volumes of Tokugawa Ieyasu’s very own personal library.

As well as these excellent permanent exhibitions, there are also various seasonal exhibitions throughout the year, making it a spot to which you can return again and again.

*Being one of the earliest remaining depictions of this epic tale, the Genji exhibit is only available to the public for one week in November.