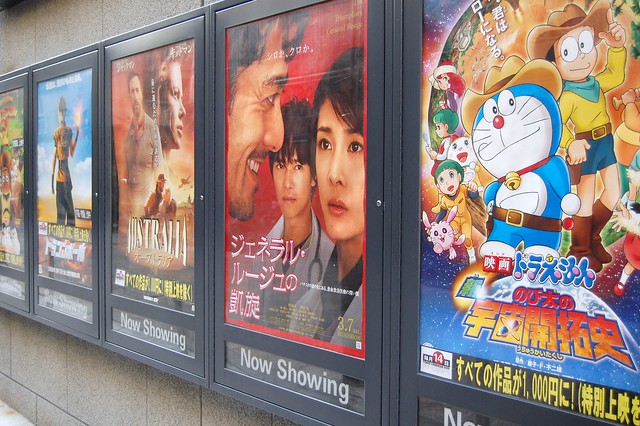 With summer temperatures soaring and as Nagoya’s famed humidity rises, you’ll probably be wanting to find things to do that are not only fun, but air conditioned. Perhaps the best remedy for the summer heat is going to the movies.

Whether you are looking forward to Peter Parker’s latest escapades in Spiderman: Far From Home, have family time with Toy Story 4, or scare yourself silly with the Childs Play reboot, this summer is shaping up to be a great season for blockbusters.

There are a load of movie theaters in and around Nagoya. Below are a few of the main ones. For a full, exhaustive list, check out the ever-excellent kikuko-nagoya.com here.

109 is a nationwide chain, and the branch in Nagoya – in the Sasashima area, next to Zepp Nagoya and the Global Gate complex – used to be the city’s biggest cinema. It has ten screens, including 3D, IMAX and 4DX. With their points card, visit six times and get the seventh viewing for free.

Another biggie catering for the mainstream crowd, the cinema in the plush Midland Square complex has fourteen screens able to seat 2025 customers making its the largest cinema in town. Four of the screens have RealD and 3D projections, while screens 9 and 10 are the only ones in Nagoya to utilize Dolby Atmos sound.

If you tend to eschew the more mainstream movies, preferring more arthouse and independent cinema, then Fushimi Million Theater is for you. There are just four screens, all showing the sorts of films that you are unlikely to see elsewhere in the city. But be warned, subtitles are in Japanese only, so if it’s a French movie you want to see, you will need to either be able to read Japanese or understand French.

If there is one complaint to be made about going to the movies in Japan, it’s the price, and with tickets a minimum of 1700 JPY – plus add ons for 3D, IMAX and all the rest – it’s not necessarily a cheap day out. With that said, there are good points to theaters in Japan too, such as being able to buy beer from the concession stand, and the food available tends to be pretty good.

In general, theaters in Nagoya are otherwise just like theaters anywhere else; big screen, seats, and an expectation of quiet during the show.  One big difference though is the prevalence of foreign films available here.  Movies from Hollywood and other cultural centers are readily available, in both subtitled and dubbed form.

You can see the latest… Marvel movie, or whatever, in English, if you go to the right showing.   Knowing which is which is a matter of knowing the right characters for each.

If the prices concern you, there are discounts available. On the first of every month, most theaters discount all adult tickets to 1000 JPY each, however expect to stand in line, as this is understandably a popular day to see a movie.

Other discounts are available on other specific days, but the dates are peculiar to each theater. The discounts available include ladies, men’s, and senior’s, as well as groups, etc.  Also, many ticket shops [金券ショップ (kinken shoppu)] resell pre-release discount tickets [前売り券 (mae-uri-ken)] for current movie releases. Many of these tickets are resold for as little as 1300-1500 yen.

You can find a pretty good description of the discounts available here, at the NIC site.

If you are looking for more detailed information about seeing movies in Japan generally, you should read this article on SIJ.