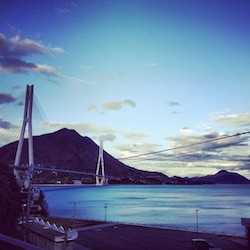 Before temperatures begin to soar, spring is a time when the Japanese take advantage of the clement weather to get out and enjoy their stunning natural surroundings. With the country’s peaks still too cold and treacherous to traverse, cycling is a popular pastime.

One of the most accessible and interesting trails is the Shiminami Kaido. The world’s second longest chain of suspension bridges spans the Seto Inland Sea between Imabari in Shikoku and Onomichi in Hiroshima-ken, connecting six islands along the way.

Interestingly these bridges are equipped with cycle and pedestrian paths giving tourists almost complete access. The exception to this is the passage between Onomichi and Mukaishima island, though conveniently regular ferries cover this leg of the trail.

The islands along the 70km trail are beautiful, and it is possible for intermediate cyclists to cover the route in one day. However, if you want to stop regularly to take in the sights, unless you are a particularly strong cyclist, it is a good idea to give yourself a couple of days. There are plenty of hotels and ryokans, with all budgets catered for: from minshuku to top class accommodation in spa hotels.

As to be expected of an island chain, seafood is a speciality of the area and many hotels serve up a full array of the fresh local catch as their evening meal with octopus being particularly bountiful. Desert is often hassaku, one of the many juicy citrus fruits that grow everywhere you look.

Some of the roads can be quite heavy going such as the climbs to lookout points and the trip across the Kurushima Kaiko bridge, at 4km over open sea, can get a bit breezy at times. For those who may prefer a more leisurely vacation, public transport is available. Buses follow the expressway as well as covering many of the beautiful spots of local interest, and most islands have ferry ports.

For dramatic views of the islands’ lush green beauty, viewpoints can be found at Hirakiyama on Hakatajima, Shiratakisan on Innoshima and the Kurushima Kaiko observation deck. As well as scenery and beaches aplenty there are many temples and shrines to explore. Also, if culture is your thing, you can visit the Hiruyama museum on Ikuchijima. This is dedicated to one time inhabitant and famous artist Hiruyama Ikuo. For history buffs the Innoshima Suigun castle displaying weapons of the Murakami pirates is a must.

Starting out from Onomichi

Onomichi is perhaps the easiest place to begin as it avoids the challenge of getting to Imabari from Hiroshima. Onomichi station is 150m from the port where you can pick up a bike from 7am. From there depart regular ferries to Mukaishima.

The most convenient bike store in Imabari is a 150m walk out of the station’s exit 2. A bus heading along the Shimanami Kaido route can be picked up from directly outside the station. These busses will stop near the cycle rental terminals along the route (http://www.go-shimanami.jp/global/english/bicycle/index.html). Busses, however, do not connect directly with Onomichi and you will need to transfer at Innoshima. (http://www.city.onomichi.hiroshima.jp/english/kanko/shimanami/shimanami04.html)

Bicycle rental stores can also be found on each of the islands. Rental is a mere ¥500 a day and you can drop your bike at any of the fourteen locations en route (though you may only reclaim your ¥1000 deposit should you return your bicycle to the terminal from which it was hired). Bicycle qualities can differ drastically, so it is advisable to book one in advance by faxing a bilingual reservation form (http://www.city.onomichi.hiroshima.jp/english/kanko/shimanami/shimanami02.html).