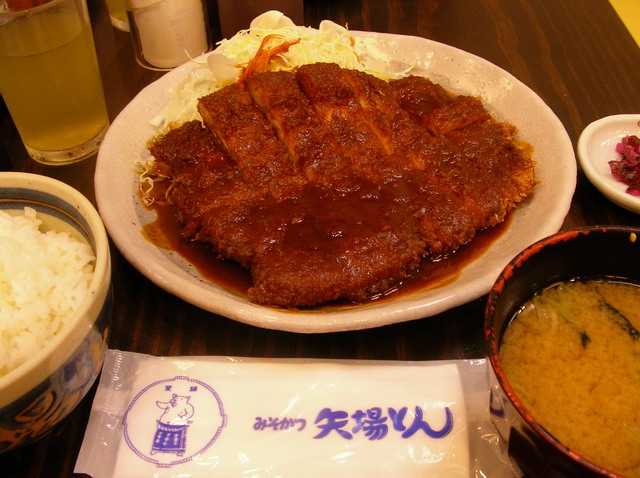 If you have spent any time in Nagoya at all, you’ll recognize the Yabaton pig. Yabaton is a staple food in the miso capitol of the world; it’s the home of the Miso Katsu renowned across the globe. Sure, serving the most famous Miso Katsu on the planet doesn’t place Nagoya or Yabaton on many people’s bucket lists, but if you love miso and fatty pork cutlets, there’s no need to bother making the list; Yabaton is heaven on earth.

Yabaton may not have invented Miso Katsu per se, (although they think they did), but “Miso Dare,” their signature practice of dipping of the cutlet in thin red miso sauce, has become synonymous with the dish. That trick was all Yabaton. The story goes like this: Suzuki Yoshio was eating dottei nabe one day when he dipped a katsu stick in the red miso base. Imagine the look on everyone else’s face as he pulled the dripping katsu stick from the nabe and took a bite. As they stared, his face must’ve lit up. A gruff “umai” must’ve escaped his lips. It was pretty good. No really good. Good enough, in fact, to open a shop.

Suzuki opened Yabaton’s doors on a side street Osu Kannon in 1947. People weren’t in the best of shape financially, or physically, back then, but they could afford Yabaton’s Kushi Katsu with red miso sauce. The Showa era shop thrived through the 50’s and 60’s, and, in 1972, Yabaton landed a prized contract with the Nagoya Dragons to serve their Miso Kushi Katsu at the stadium. No, not the Nagoya Dome. The real Dragons’ open air ballpark, the Nagoya Chunichi Baseball Stadium.

The Dragons bailed out of that classic post-war diamond to their current dismal Nagoya Dome in 1997, but Yabaton didn’t go with them, so you won’t be eating Kushi Katsu at a Dragon’s game anymore (unless you smuggle in take-out). Too bad about the Dragon’s lackluster new home, but “Yabaton” had become a household word in Nagoya, and famous throughout Japan. People throughout the nation started to pilgrimage to the little Osu Kannon shop decorated in Chunichi Dragons regalia.

The other day my wife and I set out to eat at the original Yabaton. It’s not the crowded storefront on Otsu Dori. The old shop was behind it, on one of the narrow Osu pathways marked as a two-way street. Although my wife grew up here, she hasn’t lived in Nagoya regularly for ten years, but still somehow remembered just where the old place was. As we walked she told me about the cramped two story building with shared tables, diner style waitress, and a line of cooks behind the bar. When we arrived, famished, at the spot that her motor memory led us, the building she described so vividly… the classic restaurant… the Nagoya landmark… was gone. Japanese history once again meets the wrecking ball.

Yabaton still owns the land. They recently put up a brand-spanking-new honten there. According to a long-time waitress we spoke to, they razed the old shop six years ago. My wife told her it was a shame. The old shop had so much more character. Our waitress shook her head and looked a little sad as she agreed. “Mottai nai, ne.”