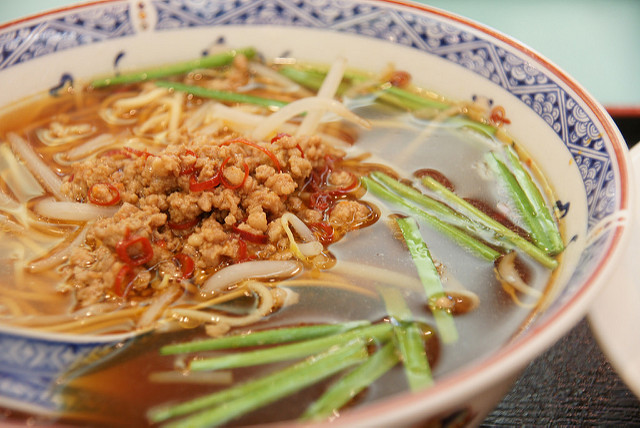 Nagoya’s cuisine is pretty different from traditional Japanese fare. While most of the best known Japanese dishes are famed for their subtlety, their delicateness, and their graceful tastes, with its spicy red miso and peppery tebasaki, Nagoya cuisine is known for having a bit of a kick to it, and none more so than Taiwan ramen!

What is Taiwan Ramen?

Taiwan ramen is perhaps the spiciest of Japan’s ramen soup dishes. Ground pork, Chinese chives, green onions, and bean sprouts are seasoned with lots of spicy red peppers and other spices before being fried. Added to this is a heroic quantity of garlic, and then the mix is placed in a soy-sauce chicken broth with ramen noodles.

With all the garlic and chili it is quite a strong-smelling dish – and you certainly wouldn’t want to be kissing anyone after eating it – though the first taste generally is not that piquant. But then, as the spices meld with the hot soup and the chili kicks in, you’ll be sweating buckets before you can say ‘can someone get me a glass of milk, please!’ In the best possible way, of course

Is it not Taiwanese?

Now, I know what you are thinking: “Taiwan ramen? That doesn’t sound so Nagoyan. The clue’s in the name, right?” Wrong. While you would be forgiven for thinking that way, as many locals do, Taiwan ramen originated here in Chikusa Ward and is as Nagoyan as Ichiro and the TV Tower.

The dish has its origins in the early 1970s in a Taiwanese restaurant, Misen (more about which, later). It is said that the restaurant’s chef created the dish – essentially Taiwan danzai noodles with the spice dialed up to the max, or a variation of on Chinese tantanmen – as a way to feed his staff during shifts. The restaurant’s regulars were intrigued by the spicy ramen and demanded that it be put on the menu. At the time the dish did not even have a name, but as the restaurant owner was from Taiwan, he simply called it ‘Taiwan Ramen,’ and thus a legend was born.

During the mid-1980s, Japan saw a spicy boom after it was rumored that weight loss could be encouraged by eating food spiced with red chili peppers. As a result, Taiwan ramen became one of the most popular of these ‘slimming’ dishes, and its fame grew across the Nagoya and the Chuubu area.

Where to get good Taiwan Ramen

Nowadays pretty much every Chinese restaurant in Nagoya, as well as most ramen shops, serves Taiwan ramen. However, if you want the best, the three restaurants below should be your first ports of call. However, if you disagree and you know somewhere better, please let us know in the comments below.

The originator of Taiwan ramen, Misen is also the best. Here it comes in three spice levels, with ‘American’ being the weakest, ‘Italian’ the spiciest and original Taiwan in the middle (the ranking, interestingly enough, comes from the strength of coffee served in each country). While JIS loves spicy food, we recommend avoiding the Italian as a lot of the flavor is lost in the search for fire.

While Misen is the creator of Taiwan ramen, Menya Hanabi took this well-loved dish and revolutionized it, in doing so becoming the first shop to serve Taiwan Mazesoba.

Taiwan Mazesoba tastes almost exactly like Taiwan Ramen but is soup-less. With thick cut noodles served with spicy meat, raw egg yolk, and negi onion, it packs a punch right at the bottom where all the extra spice hides. Another great place that is famous for its Taiwan Mazesoba is Anzutei in Meieki.

This is perhaps somewhat blasphemous to say, but one of the best Taiwan ramen shops is not only from Osaka, but it isn’t even a ramen shop. O-Sho is traditionally a gyoza restaurant, and damn fine gyoza they do too. However, they also do a fantastic Taiwan ramen, which you can have as a lunch set with their gyoza. Not all O-Shos serve Taiwan ramen, however, so ask before you sit down.