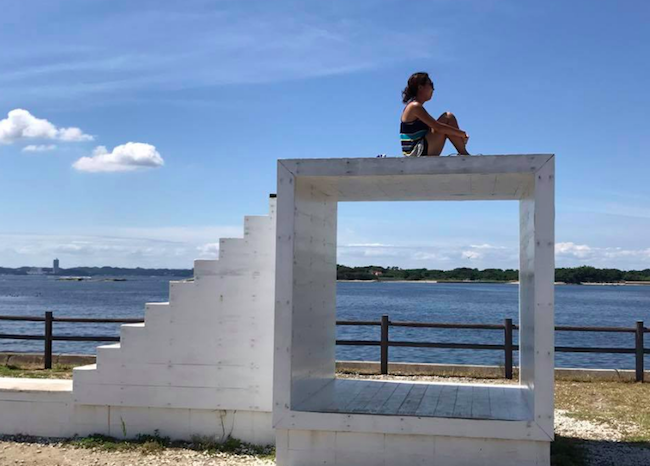 Sakushima is a small island in the sparkling Mikawa bay to the east of Nagoya which, together with Himakajima and Shinojima, makes up the Aichi Archipelago. Small it may be, but it is absolutely packed with things to do.

Sakushima is a delightful little island, and when I say little – with just an area of 173 hectares (around 3 times the size of Tokyo Disneyland), and a total coastline of around 11 km – I mean little. But it packs quite a lot of beauty in that small and compact area. As an old fishing island, there are quaint little temples and shrines, and parts of the old villages remain with traditional houses; some of which have been refurbished into restaurants in where (in the right season) you can enjoy the local delicacy of ‘fugu’, or blowfish.

The coastal area too, is lovely, and round most of the island there is a wide promenade along which you can wander as you gaze out to sea. In fact, rather than wandering, it is advised to rent bicycles (there are rental spots everywhere costing from around 500 JPY for a couple of hours up to 1,000 JPY for the whole day), which means it is relatively easy to skirt all around the whole of the island.

As well as the coastal beauty, as more than 80% of the island is woodland, you can head up into the trees and bask in the wooded nature. But as a word of warning it can get a little hilly, so if you are on a bike make sure you have a bit of strength to ride or push up the slope, and that your rental bike has good brakes for when you come back down again.

If you are not so much in the mood for physical exertion, and the weather permits, there is a small bathing beach on the island’s west coast. The sea is pretty shallow, which makes it good for small children, although the water isn’t the clearest and you have to be aware of jellyfish as summer turns to autumn. Next to the beach, there are various stall-style restaurants selling beach snacks, beer, drinks and some amazing ‘kakigori’ shaved ice. While the island itself is nice enough, perhaps the biggest draw to Sakushima is its artwork. All around the island is a series of modern art installations and sculptures that were commissioned t as part of the ArtPlan21project in 2001, bringing to mind the island of Naoshima in the Inland Sea. While the art on Sakushima is by lesser-known artists, they are still thought-provoking, charming and, thanks to their interactivity, quite a lot of fun.

When arriving on the island you should pick up a map at the tourist centers which shows where each piece can be found. Most artworks have stamps to collect, which is great for keeping kids interested in the art as they dash around the island in an attempt to collect them all. If there is a downside to Sakushima, it is the limited access. It is best advised to go by car (you can park at the Isshiki Port), as bus times from Nishio station to the ferry port at Isshiki are infrequent at best.

Photos: Paul Conway and Mark Guthrie (Own Work) via Facebook