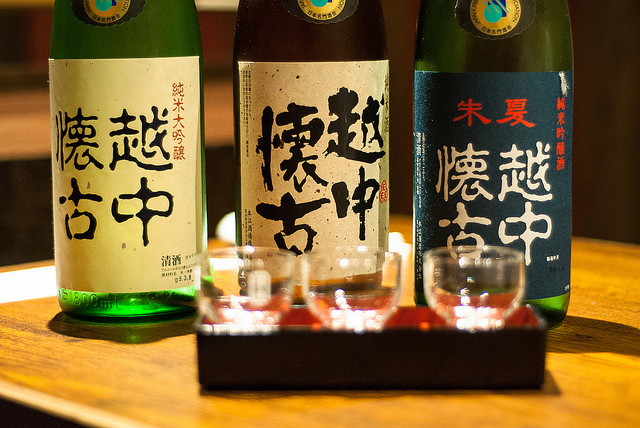 Sake, of course, is famous around the world for being Japan’s national drink. Though the drinking of Chinese alcohol is thought to predate recorded history, it is believed that sake as it is currently known – made up of rice, water and ‘kōji’ mold – dates from around the Nara period (710 to 794), and then later used for religious ceremonies court festivals as well as drinking games.

Originally the production of sake (actually called ‘nihonshu’ in Japan, with ‘sake’ being a term to cover all alcoholic drinks) was the preserve of the government, but later it was made by temples and shrines. Nowadays there are many breweries, or ‘kura’ around the country (in 2007 there were approximately 1700 kura making around 10,000 different types of sake), so getting acquainted with it can be tough for the uninitiated. Thankfully, while the Nagoya area isn’t particularly famed for its sake production, you there are many places at which you can give it a taste.

The below postings are all  recommendations from sake lovers that I know and trust, so are about personal taste. As such everything sisfor information only and Japan Info Swap does not endorse any of them.

This is the ideal place for those of you who know little about sake but want to expand your knowledge. In fact this recommendation came from a friend of mine who wanted to do just that and is now well on her way to becoming an expert. If you have sixty minutes and 2,000 JPY to spare, you can sample up to 40 different types of sake and learn exactly what your tastes and preferences are in this stylish bare concrete and chrome bar. Seeing as trying the lot would mean a different sake every one minute and thirty seconds, unless you are a particularly hardened drinker, you may want to go more than once!

Sake Bar Marutani is exactly what you might think of when the words ‘sake bar’ come to mind. Once a rice granary during the Edo period and set on the Horikawa river, it is all hard wood and old world charm. They have a large range of sake and meals perfectly balanced to match what you drink. It is the ideal ambiance in which to sip nihonshu in a classical atmosphere. I have had many recommendations for this place – from both expats and Japanese – and it is of such a high quality that I plan on taking my brother-in-law – a sommelier by trade – to sample his first sake experience when he comes to visit.

Everyone needs a friend who is a sake expert and Torikko in Imaike is the recommendation of mine. Although he said that the best sake bar around is in his own home, unless you get an invite from him, he says that this is the next best thing. This is a bar in the traditional style, but the sake choices are top notch and the ‘master’ (the Japanese term for what we would probably call a landlord or bar owner back home) is as friendly and helpful as he is knowledgable about all things nihonshu.

This place should be on the list for its name alone – it translates to The God of Sake – but it is much more than a clever name. Osake No Kami Sama is a standing bar in the covered arcade of Endoji, and is my own recommendation, and somewhere you can find me most Friday evenings post-work. A majorly relaxed atmosphere, a knowledgeable master and a  foreigner-friendly mixed clientele of salarymen, local folks and nihonshu aficionados makes it a must visit bar, just as long as you have the legs to stand while you are drinking. They also have a great menu of Nagoya foods at unbeatable prices.

If you want to go further afield to sample nihonshu where it’s made, you can do worse than head to Takayama. The Gifu city has plenty of local breweries, and you can easily spend the day getting lost (and perhaps a little tipsy) trying out the brews. Some of them have been going for around 200 hundred years, so you can probably equate that longevity with consistent quality.

There are also many breweries in the Nagoya and Aichi areas. Some of these offer sampling tours, but only on specific days. Check out the ever excellent kikuko-nagoya.com website for up-to-date details.