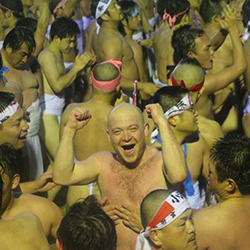 “You make your own luck in this world,” as the saying goes. Whoever coined the phrase could have been thinking of the Hadaka Matsuri in Konomiya, but making your luck here is no simple task. It takes strength, perseverance and a (perhaps sake induced) imperviousness to the cold. If you think you’re up to it, read on.

Hadaka Matsuri, literally Naked Festival, is an annual event and has been held in Konomiya, just outside Nagoya, since 787AD following Emperor Shotoku’s request for invocations to dispel plagues from the nation. There are various origin stories for the festival, some of which are particularly gruesome involving human sacrifice, but today it continues as a way of ridding the town and its people from misfortune for the coming lunar year.

It begins early in the afternoon of the 13th day of the lunar calendar (this year March 3, 2015) as troupes of men wander the streets carrying poles of bamboo to deposit in Owariōkunitama Shrine (locally known as Konomiya shrine). Doesn’t sound so interesting? Did I forget to mention they are near naked? Well, they are. Wrapped in only a fundoshi loincloth, they carry their bamboo naoizasa – wrapped in the prayers, names and birthdays of the of their village’s women, children and sick men unable to take part – through the icy winter streets. As they parade they perform daredevil stunts, swinging their gargantuan poles and climbing to their tops, all for the amusement of the on-looking crowds.

Eventually they arrive at the shrine and run hell-for-leather inside, hurling in their naoizasa. Once this opening ritual has been performed they are free to congregate for food, rest, and to top up their sake levels (the best way they have for fighting off the biting cold). Once all 9,000–10,000 participants have passed through the shrine, the main event can take place.

Everyone gathers inside the shrine’s grounds and awaits the appearance of the Shin Otoko, the ‘God man’. This local man has been selected from many hopefuls and been given the dubious honor of becoming a semi-deity. He will have spent the previous three days in prayer, locked in solitary confinement and fed on nothing but a thin rice gruel. Finally he is completely shaved, stripped totally naked, and sent out into the thronging mob, who proceed to crush towards him with the aim of touching, hitting and slapping him.

Though this sounds somewhat harsh, it is believed that through physical contact participants can pass on their household’s bad luck for the year to this God man. Of course when nearly 10,000 men are trying to touch a solitary naked wretch things can get a little bit dangerous, so he has bodyguards to watch over him cannoning buckets of ice cold water on everyone to cool any growing violence.

Eventually the masses drive the shin otoko into the temple (representing the struggle of the early shin-otokos who were chosen against their will and dragged to the shrine and perhaps their death) where he is rescued, and taken inside to nurse his multitude of wounds for a few hours. Later he will sneak out in the late night darkness with an ash-covered mochi rice cake called tsuchi-mochi, signifying the misfortune his beating accumulated. He will then bury it and the town’s bad luck will go with it into the ground.

With the shin otoko safely dispatched, the rest of the parade can head off to nurse their own wounds, clutching their freezing wet fundoshi, in search of warmth, safe in the knowledge that their year’s luck is assured.

You can get involved

For those who want to witness one of the oldest naked festivals in Japan, it can all be watched from the relative safety of the sidelines, eating and drinking from the festival food stalls, or even on local television. However, for the more hardy souls amongst you, you can take part with assistance from the ever excellent kikuko-nagoya. They will help you join part of a team, and even supply you (at a cost) with the fundoshi and tabi shoes required to take part.

It may seem like a crazy idea, but take it from someone who will be taking part for the third consecutive year, it is one of the most exhilarating things you will do in Japan, and it is certainly a great story to tell folks back home.