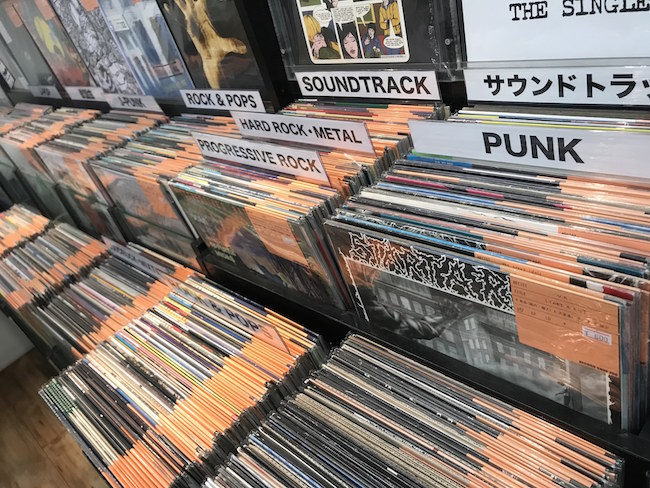 While it feels like the music industry is becoming ever-increasingly digital, with the likes of Spotify, YouTube, Apple Music, and Soundcloud being the favored media for accessing artists, conversely, at the same time, the humble vinyl record is making a come back. According to Forbes, the format has grown 260 percent since 2009, and in 2017 the US saw vinyl sales increase for the 12th straight year, with the most units sold since Nielsen Music began tracking sales data in 1991. Vinyl, it seems, is no longer the preserve of music nerds and hipsters.

The rebirth is also being felt here, in Japan, evidenced by the fact that Sony is once again firing up its pressing factory after a 30-year break, as younger music lovers discover artists via streaming sites and then look to own the physical album.

If you too are a vinyl fan or are interested in finding some hidden gems in the Japanese market, there are absolutely tons of CD and record shops around Nagoya. Below is just a small sample of some of the better-known record stores that the city has to offer.

Many of Nagoya’s record shops are in the Osu area, and with its bright yellow front and distinctive facade, Banana Records is the one that stands out the most. Split over two floors, it has a mix of new and secondhand records with a wide variety of genres to choose from, including a decent selection of indie/alternative, J-pop and classic rock, with punk and hardcore being particularly well represented. The second floor is a mecca for hip-hop and reggae fans, with a massive selection of options for each style.

There are also branches of Banana Records in Kanayama and Sakae.

While Sound Bay Republic is mostly a CD store, there is still a great selection of used records of all genres to be found. It’s a little bit grotty, but there are bargains to be found, and at the very least it is an excellent place to while away an hour or so flicking through records.

Tower Records is an internationally-renowned record store, and there are two branches in Nagoya, one in the Passé shopping complex near the Nagoya Station and the other in Parco department store in Sakae. The Passé store is a little on the disappointing side, with a small collection towards the back of the store (with a surprising number of David Bowie records) and a few more dotted around. The Parco store is bigger and better stocked with new releases and reprints.

Greatest Hits is a two-story shop which stocks second-hand records and CDs exclusively, making it fantastic for a rummage.

There are a load of rock and pop records, particularly from the ’60s and ’70s, but where Greatest Hits excels is in soul, jazz and Motown, of which there are huge selections. Keep an eye out for their sale days, when all records are 25 percent off, and the entirety of the top floor is overtaken with bargain boxes, and outside has numerous boxes with records for just 108 JPY.

Tucked away on an Osu backstreet, Recordshop Zoo, much like its name suggests, has a wide range of choices, with lots of great punk choices from both Japan and overseas. But if you are a ‘dumpster diver’ and like to while away your time delving through boxes of old gems, this is the place for you. Outside the entrance, the floor is lined with boxes of records that go for 100 JPY each, half of which seem to be hip hop. It’s certainly the place to go if you want to take a chance on an unknown artist at bargain prices. Or on Rod Stewart, who seems to be particularly over-represented.