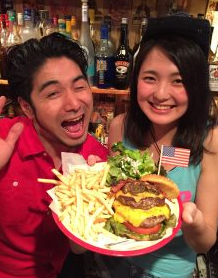 In his great comedic play Twelfth Night, William Shakespeare calls music the food of love. Now, I’m not in the habit of  contradicting the bard, however for me the food of love is, well, food. There is nothing better for the heart and the soul than having a wide selection of grub to get stuck into and for me, to paraphrase another great British literary William, variety is the spice of life.

Of course Nagoya doesn’t quite have the international culinary diversity of London, New York, or even Tokyo. However, if you know where to look you can find some really excellent international restaurants. And luckily for you, we at Japan Info Swap know precisely where to look.

If there is one thing that the Monglians knew – other than brutal domination – it’s food, so much so that in Japan Jingisukan (Genghis Khan) is pretty much the standard name for barbecued lamb. There are a few decent places around Nagoya, but it’s only at Sakae’s Mongol Shinkiro that you dine in a room styled like a yurt whilst wearing traditional Mongolian dress. Cosplay + lamb = a good night out.

Italian restaurants are ten-a-penny in Nagoya, but this is, in my opinion, by far the best. With pizzas to rival Solo and Cesare in Osu, a pretty decent wine menu, and an ever changing specials selection, Seconda Bambina (part of the Bambinba chain) is as close to a genuine Italian restaurant as you are likely to find. It has a lively yet intimate atmosphere, and it’s a really enjoyable night out. In fact, it is such a favourite of mine that it is where I recently proposed to my girlfriend. She said ‘yes’, by the way.

Casablanca claims to be “Nagoya’s one and only authentic Moroccan restaurant”, and as I do not know of another one, it is hard to dispute those claims. What I will say is that the food is as close to that I had when visiting Marrakech a few years back, with the tagines being particularly good. The riad styled restaurant also has belly dance shows in which a fortunate (or perhaps unfortunate?) few can take part.

On first sights Sagarmatha Momo House doesn’t look like much – just a counter and a few tables, your average ‘Indian’ restaurant run by Nepalis. But its actually the best Indian food I’ve had in the city. Whopping great big naans, a wide range of curries, and the best samosas I’ve had since leaving Birmingham, England seven years ago. On top of that the staff are more than accomodationg, particularly if you are in a large group.

There are a few well known American restaurants around Nagoya: TGI Fridays and Shooters in particular. But whether it is due to the clinical nature of the former, or overkill of the latter (I dread to think how many nights I’ve ended up there) for an American diner I prefer The 59s. The food is top notch, they have a huge screen on which to watch big sporting events, and their bar is stocked with tonnes of international beers. Most importantly, however, the atmosphere is always buzzing!