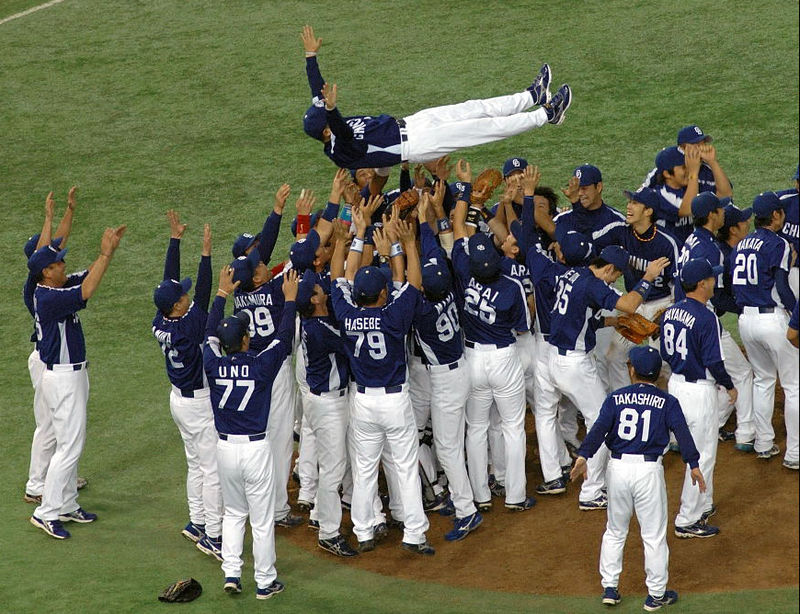 When you think of Japanese sports, there is a good chance that a martial art comes to mind. However, if you ask a local what their favorite sport is, you might be in for a surprise.  The largest professional sports competition, in terms of television ratings and spectators, baseball is considered by many to be the Japan’s number one sport and national pastime. Here in Nagoya we have one of the biggest teams in the Nippon Professional Baseball, the Chunichi Dragons.

Baseball season in Japan starts in late March or early April with spring training  and continues with games nearly every day, six days a week with Mondays off, until October, when the annual playoffs called the “Climax Series” decides which team from each league will compete in the Japan Series, for a shot at the national championship.

A Brief History of  The Nagoya Dragons The Chunichi Dragons were founded in 1936, originally under the name of Nagoya Club. After a few dalliances with various names, they finally settled on their current moniker in 1954. The new name  seemed to be the bearer of good fortunes as the team went on to win their first Japan Series championship in that same year. However, while the Dragons went on to win a further six Central League pennants between 1974 and 2006, they failed to win the Japan Series again until 2007.

In this year a new playoff system put in place meant that, despite not winning the Central league, they went on to take the top title, breaking a 53 year hoodoo, the longest drought in NPB history. While the Yomiuri Giants of Tokyo and Osaka’s Hanshin Tigers are known by some Stateside in their own right, the Dragons are perhaps best known as the team joined by Tom Selleck in his 1992 movie Mr. Baseball. Despite this lack of international recognition, and despite their relative lack of success on the big stage, Chunichi are perennial playoff contenders, and are thought of as one of the most powerful teams in the league.

A Day at Nagoya Dome

This season so far hasn’t exactly been a vintage year for Nagoya’s finest, as they currently trail the league-leading Giants by five games and are three games behind Hiroshima Carps in the chase for the playoffs. However, that is no reason not to go along and cheer your local team.

Whether you are a fan of baseball or not, a trip to Nagoya Dome, the Dragons’ home since 1997, is still a great day out. In the stands there is a great family atmosphere, with children mingling happily with the diehard fans, singing and chanting their heroes on (something that may come as quite a surprise to any readers originating from the UK, whose sporting experience comes from the less congenial terraces of soccer stadiums). Ticket prices are relatively cheap, and vary between 1500JPY and 5800JPY (with just 500JPY for children) however, new supporters, particularly ones with young families should be aware that costs may rise dramatically as merchandise can get pricey. It is almost obligatory to purchase a pair of small plastic baseball bats to hammer together in time with the chants. Then there are the miso kushi katsu, as necessary as a hot dog at Fenway Park, the karaage, the French fries, the sausages on sticks, and the stadium staff bringing kegs of beer to your seat. After that there are the caps, the jerseys and the Koala ears to mimic those of the extremely popular Dragons’ mascot, a giant blue, back-flipping Koala bear (the reasons for which are presumably best known to the marketing executives who devised him in 1994).

If not put off by the costs, some readers may be put off of attending Japanese sporting events by the internationally infamous incident of the Urawa Reds soccer team displaying a “Japanese Only” banner within the stadium in March, but we saw nothing of the like at Nagoya Dome.  Not only was Hernandez cheered with as much enthusiasm as Oshida, but we were offered food and homemade banners to wave with the rest of the supporters. It may not be sumo, it may not be kendo, but for a uniquely Japanese sporting experience, you can’t beat a game of baseball at Nagoya Dome with the Dragons.

Whether you like baseball or not (and I certainly fall into the ‘not’ category), it is a fantastic day out. The Chunichi Dragons home field is The Nagoya Dome in Ozone, which was constructed in 1997.  The geodesic dome was intended as a baseball field and event space, and can seat over 38,000 people (officialy 40,500 people).  On a random note, the Official theme song for The Nagoya Dome, “Here For You”, was written by local foreign FM radio disk jockey, James Havens, who pops up around Nagoya periodically to this very day!

Tickets can be picked up at Lawsons (L-code [44 + 3 figure date]), or at Circle K, Ticket Pia or SunKus (P-code 591-090). Tickets are also sold on match day at the Nagoya Dome Ticket Booths near Gates 1 and 8 from 10:00 until the end of the fifth inning. Infield tickets cost between 2500JPY-5800JPY, and outfield seats  1500JPY-1800JPY, with children getting in for 500JPY. Further information in Japanese is at the Dragons’ website at http://www.dragons.jp/

You can find the Chunichi Dragon’s schedule and more information in English at http://bis.npb.or.jp/eng/teams/calendar_d_08.html

Image by Gnsin (Own work) [GFDL or CC-BY-SA-3.0], via Wikimedia Commons