Must See Shrines and Temples of Nagoya 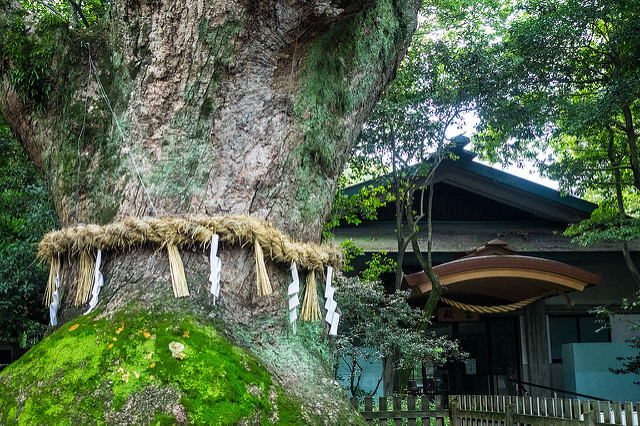 Must See Shrines and Temples of Nagoya

Japan is served by two predominant religions: Shinto and Buddhism. Shinto is a form of ancestor worship and is the traditional religion of Japan – though it was codified in the eighth century it had been around for many centuries before with evidence that it was around during the pre-historical Jōmon period – with many Gods, or ‘kami’, housed in shrines around the country.

Buddhism came to Japan around the 6th century (though it is possible that it had been introduced some two hundred years before) and grew side by side with Shintoism. Today many Japanese worship both religions, with it being said that Japanese are born in Shintoism, and die in Buddhism, with the latter having the advantage of a belief in reincarnation over the former. (Recently this phrase has been modified to add that Japanese are also married in Christianity, reflecting the propensity for young people to wed in Christian-style ‘churches’.)

For many centuries, Shinto shrines and Buddhist temples co-existed on the same grounds, one standing shoulder-to-shoulder with the other. However, during the Meiji era (1968-1912), a period of great upheaval in Japanese society as the country transformed from samurai rule to become an industrial super power, a decree was passed that these houses of worship must become either one or the other, leading to many shrines and temples to be destroyed.

However, there are still many fantastic shrines and temples to be found within the city of Nagoya. Here are a few of our favorites. Atsuta Jingu ranks in importance second only to the Great Shrine of Ise in Mie (the center of the Shinto religion in Japan) and draws over 9 million visitors a year to its gates. The shrine, located in Atsuta Ward of Nagoya City, dates back nearly 2,000 years, and is dedicated to the “Five Great Gods of Atsuta”, who are connected with the sacred sword Kusanagi no Tsurugi, or “The Grass Cutting Sword”.

The sword is one of the Three Imperial Regalia of Japan.  According to the 8th Century compiled kojiki, Chronicle of old things, the oldest extant chronicle of Japan, the god, Susanoo found the sword in the tail of an eight headed dragon he had slain. The sword was later presented to the goddess Amaterasu, and later presented to the warrior Yamato Takeru, who used it’s magical powers to cut his way out of a grass fire started by a treacherous enemy warlord, hence it’s moniker. When getting off at the Ōsu Kannon subway station on the Tsuramai line, it is difficult to miss the large Buddhist temple from which the station takes its name. The original temple was built in 1333, though to save it from regular flooding the shogun Tokugawa Ieyasu had it moved from where it had stood in Ōsu-gō, Nagaoka village, (now known as Hashima in Gifu Prefecture) to its position today. Unfortunately this did not protect it from the devastation it suffered following a large fire in the 1820s, and the attacks on Nagoya during World War 2. It was rebuilt in the 1970s, which is what we can see today, but this does not detract anything from its beauty.

Fortunately the wooden statue carved in the eighth century by the famous monk Kōbō- Daishi of the temple’s deity the bodhisattva Avalokiteshvara, Kannon in Japanese, survived these disasters and looks over the temple and its worshipers to this day. Below the building is a library containing around 15,000 classic items of literature, including the oldest manuscript of the aforementioned Kojiki, the first book on Japanese mythology.

The name literally means Japan-Thai temple and was built to represent the harmony between the two nations. It was established in 1904 to enshrine Buddha’s ashes and a gilt bronze gifted by the king of Thailand in 1900, and is the only temple in Japan that does not represent a single sect of Buddhism as it was built following the agreement of the representatives of all the Buddhist sects.

The holy remains are enshrined in a 15m Gandhara style tower, a Hoanto, built in 1918. Since then the temple grounds have grown to include a large Dharma hall as well as a five story pagoda. You will also find a street fair in the area on the 21st of each month. Toyokuni Jinja is a Shinto shrine that was built to enshrine the Samurai leader and ‘second great unifier’ of the country, Toyotomi Hideyoshi. It is one of a series of shrines that commemorate the great man, with the main one in Kyoto where Toyotomi’s remains are interned. Also known as Hōkoku Shrine, the Nagoya shrine was built in Nakamura Park, the area in which Toyotomi is said to have been born.

A peaceful shrine, befitting that of a man who attempted to unify the nation and bring the warring period to an end, there are ponds, traditional bridges and sun-dappled paths amongst the grounds. And it is not just Toyotomi who is enshrined there, but also one of his most famed allies, Kato Kiyomasa, who was also born in present day Nakamura ward. Koshoji was founded by the monk Tenzui in the 17th century and was long connected with the Owari branch of the Tokugawa family. The stand out structure, a 30m-tall, five story wooden pagoda, was built in 1808 and is the only wooden pagoda of its kind in the Tokai region. The main hall is older, dating from 1750 and enshrines an image of Amida Nyorai, the Buddha of the Afterlife, as well as a shrine where believers can pray for ‘pokkuri’, or painless death.

Within the grounds is a beautiful raked stone Japanese garden (admission fee 500 JPY) and no trip is complete without taking part in a Japanese tea ceremony in the 300 year-old tea house. Also of interest is a 3.6m, 20 ton bronze image of Dainichi Nyorai (Vairocana) dating from 1679 at the rear of the temple.

Differences between Shrines and Temples

In much the same way as a church is not the same as a synagogue, shrines and temples are not interchangeable terms for the same thing. Shrines (‘jinja’ 神社)  are places of worship for Japanese Shintoism, whereas a temple (‘otera’ お寺) is for Buddhism.

For a more in-depth look into the differences and similarities, check out what The Japan Guy website has to say on the matter. Below is his simple break down.