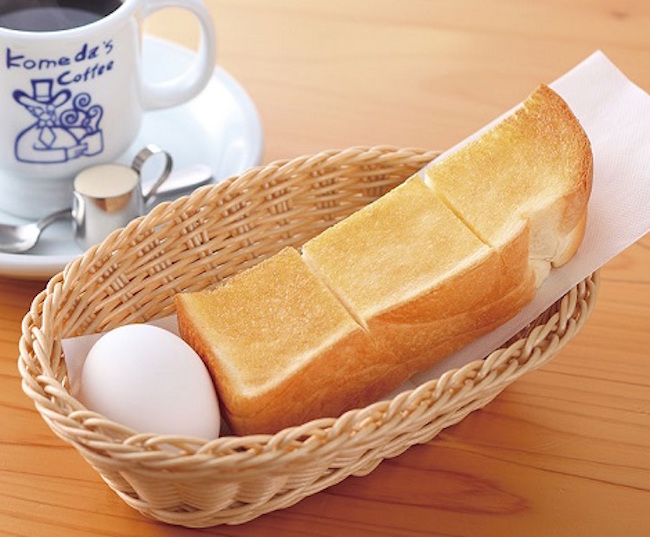 Japanese cuisine is well known for its delicate flavors, its subtlety, its exquisite fragility. However, here in Aichi we do things a little differently. Nagoya-meshi is famed for its full-flavor, its richness, its piquancy.

What is a Morning Set?

If a Nagoyan asks you ‘have you had a good morning?’, there is a good chance that they are asking you about your breakfast. ‘Morning Service’ (モーニングサービス) can be found in cafes right throughout Nagoya and its surrounding cities, and for the price of your cup of coffee, for no extra charge, you will receive a small – or sometimes not-so-small – breakfast of some kind to accompany it.

Local legend has it that the Morning Service has its origins in the city’s historical links to the cloth manufacture trade. Merchants in the industry had to be up early and required a quick meal before the morning markets opened. Some coffee shops in the 1950’s started giving its customers boiled eggs and peanuts with their coffee, and an institution was born.

For the most part these breakfasts consist of a slice of thick-cut, fluffy toast, dripping in butter and served with a boiled egg. However, as the custom has grown in popularity, cafes have begun to compete with each other to serve the biggest, best and most interesting Morning Service.

Where to get the best Morning Service?

Morning Kisa Lyon, just south of Nagoya Station, knows which way its bread (or toast) is buttered and is open for Morning Service all day. At Lyon you can choose from six different sets, and perhaps the most popular is the Ogura bean jam sandwich, which is filled to bursting with sweet red bean paste inside toasted bread; very much a Nagoyan institution in itself.

When Nagoyans think of Morning they probably think of Komeda. This coffee shop chain is Nagoya’s biggest, and is considered to be ‘the daddy’ of Morning, bringing the custom to its branches around the country. Komeda offers the classic complimentary set with your drink: half a slice toast so thick that my grandmother would have called it ‘doorstep slice’, oozing with butter and a boiled egg. For an extra 110 JPY you can get a small bowl of sweet azuki bean paste or for 220 a small side salad.

While most cafes offering Morning Service are still very much of the Showa era from which the custom originated, Kako is a little bit different. This isn’t about ojisans sitting around, smoking themselves to death; these guys are motocross enthusiasts, mountain bikers. They’re cool. But still, these cool kids don’t scrimp on the Morning Service. Until 10:30 there are five different sets to choose from, with prices ranging from 500 to 850 JPY. A big favorite is the fruit bowl, which is perfect in this summer heat.

Since opening in 1986, Kato Coffee shop has been a place for coffee lovers, and this specialty gourmet roaster is renowned nationwide for its online store stocked with beans directly sourced from all over the world. Again, the most popular Morning Service here is the ogura toast set with sweet red beans, but there are others on offer, including German sausages. Whichever set you have, the Coffee Zenzai comes highly recommended, and it is said to be a favorite of Japan’s most famous writer Haruki Murakami when he visits.

Rather controversially Ichinomiya City, about 15 minutes from Nagoya on the JR line, also claims to be the birthplace of the Morning Set. Whether or not that is indeed the case, there can be no doubt that the city’s cafes have made it their own. All across Ichinomiya you can find cafes doing a variety of insanely good breakfast sets, quite often far superior in both quantity and inventiveness than you can find in Nagoya.

Each year there is a Morning ralley to celebrate the custom, with competitions and prizes for cafes and diners alike. Keep an eye on the Ichinomiya Morning Project website for further details.