If you’ve been hanging around Tokyo (or following our Let’s Tour Tokyo series) long enough, you’ll have no doubt found there’s a pattern with a lot of neighborhoods in the central part of the city in that they sometimes specialize in some form of commerce or government. Harajuku and Omotesando is devoted to fashion, Kappabashi is famous for its cooking and kitchen supply houses, Tsukiji is home of some of the best sushi stands and restaurants; even if the wholesale market that started it all has moved 2kms east, and Tokyo wouldn’t be Tokyo without Akihabara and all things powered by electricity and Japanese pop-culture. Jimbocho Book Street keeps in line with a new rule I’ve dubbed “Japan Rule 84: There’s a neighborhood for everything if you search hard enough.” 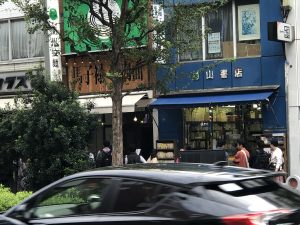 The area was primarily residential until 1913 when a large fire razed the entire area. At that point, a local scholar and university professor Iwanami Shigeo opened up Iwanami Shoten, a used bookstore and publishing house he used to disseminate his own works along with those he thought to be intellectually valuable. Soon, it became a place for intellectuals and students to swap ideas and debate each other over tea and snacks, as other bookstores and cafes began opening up over time. During the postwar period, these publishing houses were pressed into service as every aspect of Japanese life was to be rewritten and reformatted. Eventually, the area became the home of large publishers like Shogakukan and the location of the head store for chains like Sanseido. Even still, the indie bookshops and cafes remain the heart and soul of the neighborhood.

My Partial Loss Is Your Gain It was on a search for a photo book of old streetcars and trams in Japan that led me to spend a day in Jimbocho the first time years ago. I never did find that particular book, but I found a wealth of small first and secondhand booksellers that specialize in any and everything you can imagine. Of course, the vast majority of publications are in Japanese, but you can be sure to find that needle-in-a-haystack out-of-print English language book if you comb through the shops enough as well. Not just books either, but almost anything that’s printed on paper or associated with literature can be found in the narrow streets between Yasukuni-dori and Kanda-Suzuran-dori. Also remember: there’s nothing like curling up with a good read over a hot cuppa. Jimbocho is also host to many coffeehouses and tea rooms because of this, so even if you don’t spend time searching for a page-turner, you can at least drop into a cozy spot with your own time waster in hand.

Here are a few shops I can recommend in order to get you started:

Although now one of the largest bookstore chains in Japan, this location is the one that started it all.

One of the original booksellers in this location, Tokyodo is known for it’s themed floors dealing with the past, present and future of humanity in terms of learning and thinking. The top floor has a small space where novelists, writers and authors come and discuss their manuscripts on a regular basis. It also happens to have one of the best coffeeshops in the area on the first floor in the form of Paperback Cafe.

Whenever I need a foreign book (read: academic book or novel written in English) that I can’t seem to find anywhere else in town, or even sometimes can’t track down online, I tend to head over to Kitazawa Shoten and peruse their stacks or if nothing else, ask the staff if they can help me get my hands on it. After over 100 years of collecting rare and second hand foreign books, they definitely know their stuff.

The whole neighborhood is within a 5 minute walk of Jimbocho station, served by the Hanzomon (H), Mita (I) and Shinjuku (S) lines. Also be sure to check Jinbou.info to gather more information on other bookshops and events.