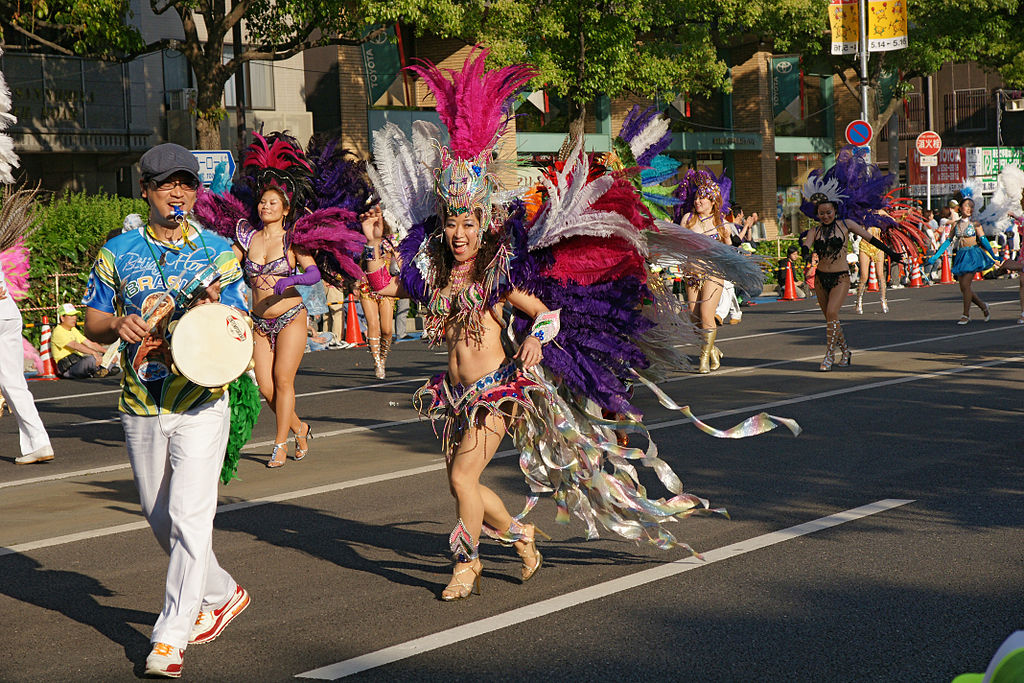 Although the Kobe Matsuri is a relatively young street festival – it began in 1971 – the roots of the celebration twist much further back in time to an unexpected source. Back in the 1930s, when Japan was not immune from the ills of the worldwide economic depression, city officials sought a way to lift flagging spirits with a party based on the the Rose Festival that had begun in Portland, Oregon in 1907.

Borrowing from such American traditions as the coronation of a festival Queen, the Festival of Minato was different than other urban Japan street fairs which mined centuries-old cultural traditions. It was considered to be a festival of the “citizen creative.” The highlight of the affair was a grand floral streetcar.

Another influence of the Kobe Matsuri was the Kobe centennial celebration in the Festival of 1967 that was orchestrated by the chamber of commerce and other financial interests. It featured a fancy dress parade and streets flooded with dancers.

The Official Beginnings of the Kobe Matsuri

In 1971 the Kobe Matsuri was officially codified to be staged on the third Sunday of every May. Each celebration would have a theme – the first was “flowers and celebration of sea and sun” – and there would be an election of Queen Kobe. More than 70 parade organizations turned out that first year. The “Citizens Festival” has evolved into the city’s biggest party of the year drawing many visitors from neighboring prefectures. It now swallows an entire weekend – this year’s dates being May 14 and May 15. In addition, this year Disney Sea will be honoring its 15th anniversary by coming down from Tokyo and participating with a “The Year of the Wish” theme.

There are parades during the day on Festival Sunday beginning at 11:00 a.m. with a danjiri (float) parade trailed by exhibitions from more than 1,300 local dancers working their way down Flower Road in the Sannomiya-Motomachi area. Stages and pavilions are scattered throughout the festival boundaries for special concerts, including traditional Japanese music and performing arts. Street performers from around the world are also on hand to entertain along with local Kobe food delicacies being dished out from omnipresent food stalls.

Year in and year out a parade favorite is the injection of Brazilian culture into the proceedings by the riotously colorful Copa Samba Team, sponsored by a local Brazilian restaurant and bar. The dance team is captained by Vanusa who earned her bonafides as a top dancer with Beija Flor Samba Team, winner of 2015 Rio’s Carnival. Costumes made for the Rio de Janiero Carnival are available for rent or parade participants can make their own. The more colorful the better. Samba lessons are also available for those who wish to participate in the samba.

Several of the surrounding wards piggyback on the Kobe Matsuri to celebrate their own residential traditions and are worth checking out during the weekend. The dancing and feasting go on into the evening and the entire bash concludes with an offshore fireworks display over the Kobe harbor. All the entertainment is free to enjoy.