Blood on the Tracks: See Keirin Cycle Racing in Nagoya 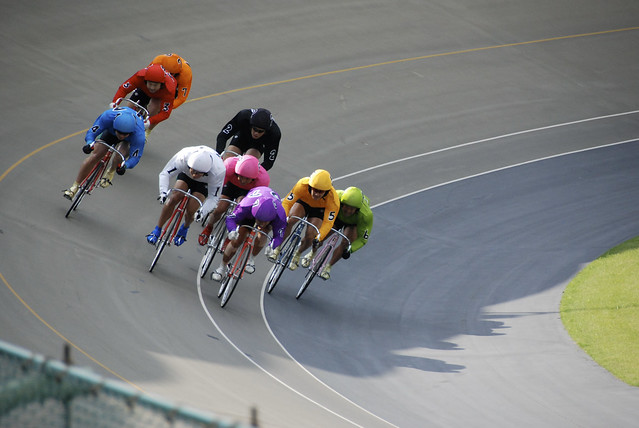 Blood on the Tracks: See Keirin Cycle Racing in Nagoya

If you have ever seen track bicycle racing in a velodrome or on TV during the Olympics, you would consider events such as pursuit, omnium and time trials as exhilarating, high-speed, but ultimately combat-free sports. In Japan’s favorite cycle event, ‘keirin’ racing, though high-tempo and exciting, stands out for its embracing of sheer physical danger.

Developed in 1948 for gambling purposes (more on which later) keirin, literally cycle race, is a popular form of cycle racing that resembles the individual sprint, but with up to nine racers instead of two, making it a harum-scarum race that can be pretty terrifying… and fun to watch!

The race begins with all nine riders, having drawn lots for a position, lining up on their brakeless fixed-gear cycles in their brightly-colored jerseys. At the gun, they take off behind a pacing rider who starts slowly (about 25km per hour) with the riders jostling behind him for position. Gradually the pacer ups the speed to around 50km per hour before, at around 1400m into the 2km race, he veers off the track suddenly, the signal for the competitors to make a break for it. 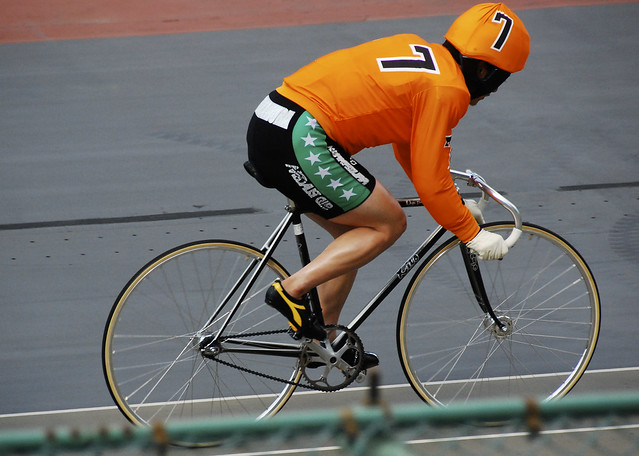 With his bulky armor to protect him from elbows and head butts, this keirin racer is a far cry from the skinny riders seen at Tour de France

As the speed climbs up to 70 km per hour, competition grows fierce, and it is not unusual for elbows, fists and even head butts to be used as a way to battle through the packed field, and riders – wearing body armor to protect themselves from blows – race to the line. In this furious, frenetic finale there are often crashes and falls, as all nine riders compete to take the top spot.

Japan has something of an unusual relationship with gambling. Casinos are banned, as are most forms of sports betting. However, some activities such as the lottery are allowed, and pachinko players hop through a loophole, letting them ‘sell’ the prizes they win. The other form of acceptable gambling is in the ‘Public Sports’ of horse racing, bicycle racing, speedway, and motorboat racing.

This means that a major draw of keirin for Japanese is that it allows spectators to bet on the races, with revenues raised used to support a wide variety of initiatives, including those of the local municipalities as well as nonprofit organizations. Over ¥1.5 trillion is bet on keirin each year.

To ensure that the ‘integrity’ of the gambling is maintained, and to create a level playing field, the riding equipment is virtually uniform, with only a handful of manufacturers certified to build the bikes and each component stamped by the Nihon Jitensha Shinkōkai (Japanese Bicycle Association or NJS).

Also, riders are not permitted to leave their enclave within the bowels of the velodrome during meets, all sleeping overnight in communal rooms. Furthermore, electronic devices such as cell phones and tablets are forbidden to ensure that inside information (such as injured or unwell riders) is not leaked, or outside agents are unable to influence outcomes.

While most races are watched on television, or in designated gambling shops, it is possible to visit the velodrome itself to enjoy a day of racing.

Entry to the velodrome is exceptionally cheap – standard entry can be just 50 JPY, and free for women (though it has to be said, there are very few women at the track). If you want a little more comfort, entry to indoor stands can cost as little as 500 JPY, or the ‘Royal’ rooms which cost 3,000 JPY. 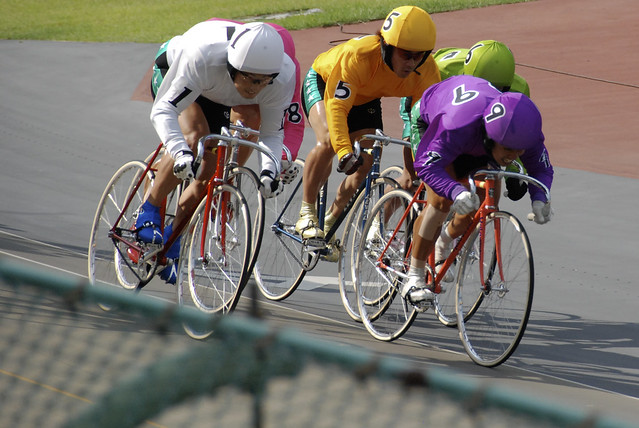 Racers dash for the finish line

As the racing lasts all day there are food and drink stalls around the velodrome, which of course also sell beer. And if you do wish to have a little flutter but know nothing of the racers, some professional tipsters can, for a small fee, advise you as to who is most likely to win each event. However, if you do choose to make a bet, always gamble responsibly, and when the fun stops, stop.