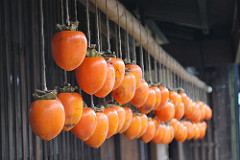 The return of oden to convenience stores in around mid-August Japan is a signal that fall is coming, and for many this means relief from the oppressive heat and humidity that kills the appetite.  In fact its rather good timing, as autumn foods are especially delicious;  they even have an old adage for it: 食欲の秋  (shokuyoku no aki) ‘autumn is the season for eating’

There are so many fantastic fall foods from which to choose, each with their distinct flavor and regional variation. The great thing about Japanese autumn food is the fact that, to reflect the weather that is still pleasant, it ranges from hearty and hot to fresh and delicate.

The undisputed king autumn dishes, oden is a firm favourite of the Japanese at this time of year. While this simmering hot pot may have all the hallmarks of a winter dish (and it is certainly enjoyed all through the colder months) you will see it appear in ‘yatai’ food stalls and at the counters of most convenience stores from as early as the last days of August.

Ingredients vary throughout the country, but most commonly you will find daikon radishes, boiled eggs, konnyaku, tofu and processed fishcakes stewed in a light, dashi-fish broth. It’ll certainly put hairs on your chest.

If oden is the most prominent Japanese autumnal dish, the mushroom, or ‘kinoko’ is the major ‘aki’ food of choice. Thanks to the summer humidity there are many kinds of edible (and not so edible, so be careful) fungi at this time of year, but it is the matsutake mushroom that is the most famous.

As highly prized as the truffle in Europe, all attempts to cultivate it in Japan have thus far failed meaning a domesticly grown brand can come at a high price, with 100g of Kyoto grown matsutake costing upwards of 50,000 JPY. The lest prestigious brands come in at a slightly more reasonable 20,000 JPY for one kilogram. When cooking they should be lightly grilled on a hot stone so as not to mask their delicate taste.

Locally known as ‘kaki’, the Japanese Persimmon is a popular fall fruit that you can see growing all over the country. In some places you can go for kaki picking trips, and if you live anywhere that has even the slightest access to the countryside, do not be surprised to find boxes of this sweet somewhat fibrous fruit being brought into places of work as ‘omiyage’ souvenirs. Kaki are commonly eaten dried, and you will have likely already seen them hanging outside places of residence for that purpose.

The kanji that makes up the name of this small fish translates literally as ‘autumn knife fish’, reflecting both their peak season and their appearance. A fatty fish that is mainly caught off of Japan’s north eastern shores, it is versatile to prepare. It can often be served as sushi or sashimi, but it can also be lightly grilled whole, or filleted , rolled with bacon and grilled. If you are a particularly big sanma fan, why not head to the Meguro Sanma Festival, though you will have to wait for next year, occurring as it does in the beginning of September.

Most of you probably think of chestnuts as a winter dish (roasting over an open fire, Jack Frost nipping at your nose), but here in Japan they are a closely linked to autumn as the changing of the colours of the leaves. It is not difficult to find hot chestnut vendors at this time of year, particularly around train stations, as the scent of them roasting drifts around the neighbourhood. The most common chestnut dish is ‘kurimeshi’, served with sake and rice. ‘Kuri manju’ cakes are a very popular dessert.

It’s not just food in Japan that gets the autumnal treatment, but drinks too. The convenience stores will be stocked full of coffee drinks with seasonal flavours and the beer cans will be decorated with leaves of red and gold. But it is sake that is the true drink of aki.

Traditionally brewed in winter, pressed in spring and allowed to age during summer, fall is the prime time for drinking the Japanese rice wine. Liquor shops will be stocking many ‘hiyaoroshi’ and ‘aki-agari’, seasonal and limited edition sake, the former pasturised only once for a more delicate flavour. Ask your in your local sake stores for the new arrivals or keep an eye out for labels adorned with leaves or mushrooms.

Yakiimo are simply roasted sweet potatoes, and they are quite possibly the most popular autumn snack in Japan. The sweet potatoes are roasted and sold in a variety of places from conveniences stores and yatai (food stalls) at matsuri, to mobile roasters who drive around town selling on the street.  I suppose you could do it at home as well, though what is the fun in that?