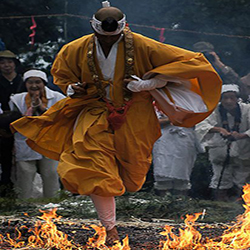 Winter in Japan can get a touch on the chilly side, can’t it. So, what’s the best way of warming up? Sitting under a kotatsu? Attaching hot kairo heat pads to your body? How about walking through fire? Okay, maybe the latter one is a bit extreme, but that doesn’t stop the priests and followers at Akibasan Entsu-ji doing just that.

Hiwatari Shinji is a Buddhist fire walking ritual performed throughout Japan, and is held in the Akibasan Entsu-ji shrine on the second Sunday of every December.

The history of Akibasan Temple

The temple itself was founded by the great Buddhist teacher Kūkai (posthumously known as Kōbō-Daishi) who preached a Mikkyō esoteric tantric form of Buddhism, and enshrines the fire kami (or god) Sanjakubo Daigongen.

Born in Shinano in modern day Nagano prefecture, Sanjakubo left home to become a wandering priest, begging as a way of subsisting. When studying the religious rites of Acala (or Fudō-myōō in Japanese), a wrathful sword wielding deity engulfed in flame, Sanjakubo felt a sword in his hands which enabled him to fly. Mounted on the back of a white fox he flew southwards where he landed on Mt Akiha or Akihasan, thus becoming Akiha/Akiba kami, a protector against fire.

Akiba kami gained great popularity in the mid-Edo period, which is perhaps when the right hand temple at Entsu-ji became dedicated to him. At this time both Shintoism and Buddhism were worshiped together, with Shinto shrines and Buddhist temples coexisting side by side. However the Meiji government outlawed this system, forcing followers to choose one or the other, destroying one place of worship. Fortunately the the shrine at Entsu-ji was left untouched and the traditional style can still be seen to this day.

There are various forms of worship of Akibasan throughout the country. At Akibasan Entsu-jiin Atsuta the first ritual performed is Shichijuugozen-jinku in which mochi rice cakes are offered up to 75 mountain gods. Following this 20 to 30 shugenja dressed in white kimono (ascetic mountaineering priests who practice severe self-discipline and abstention and equate enlightenment with attaining oneness with kami) pray for better fortune, improved business, and the growth of family prosperity. Sutras are recited, conch shells are blown and the shugenja hold question and answer sessions with followers. After this it is time for the Hiwatari-shinji, the fire walk.

The Homa (goma) ritual of consecrated fire is unique to Vajrayana and Esoteric Buddhism. The daily burning of wood offerings is performed by qualified priests and is believed to have a powerful cleansing effect spiritually and psychologically. During the Hiwatari Shinji, this ritual is taken to another level, with a burning pathway placed before the shugenja priests.

To elevate to a higher level of concentration they chant kuji-in, nine syllable mantras common in Mikkyō Buddhism, before striding out across the heat. The ritual’s purpose is to pray for protection from fire and other tragedies that can come from the elements, as well as against theft, traffic accidents, poverty and early mortality.

Getting involved and getting there

Once the shugenja have finished, it’s your turn. No, really. After the priests come their various followers, but anyone can take part in the cleansing ritual if you have the bottle (and a high pain threshold). If you want to take part, or even just witness this remarkable festival, you should head to Akibasan Entsu-ji shrine near Atsuta jinga. Prayers and rituals will be going on from 7am, and the fire walking begins at 7pm going on until 9pm.

To get there take the Meijo subway Line to Tenma-cho. (If you are travelling anti-clockwise, be sure that you are on the circle route, and not heading out on the Meiko line to Nagoya-ko). From there take exit 1 and walk straight for approximately 3 minutes. On the Meitetsu line get off at Jingu-mae, cross the road towards Atsuta shrine, and turn left. It takes about 8 minutes.