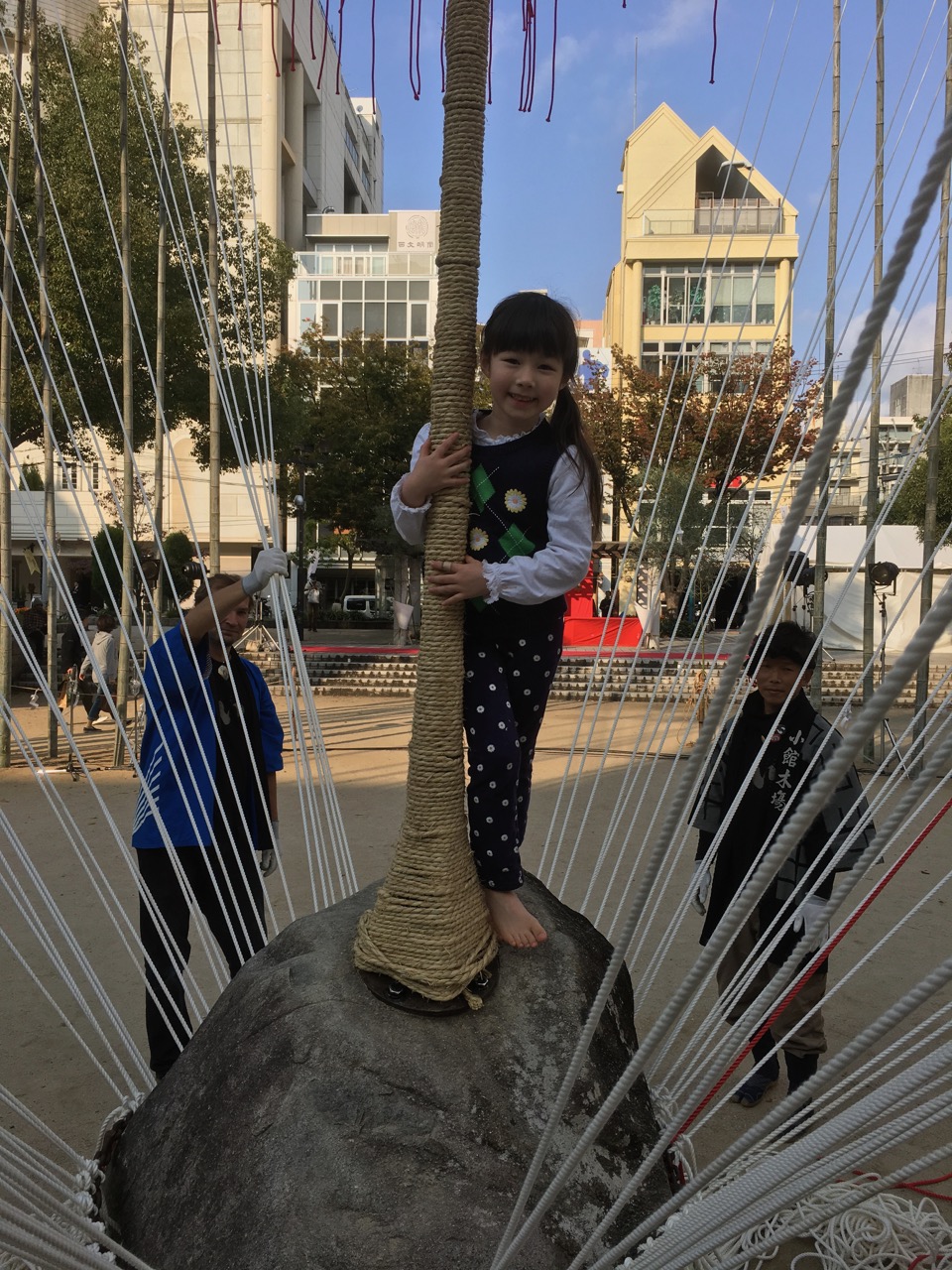 Inoko Festivals are a familiar feature of autumn across western Japan. With roots in ancient Chinese harvest festivals celebrated in the tenth lunar month (the month of the boar), Inoko celebrations were observed in Japan as early as the Heian period, and over time developed into several distinct expressions, from the festival of the court down to that of the common folk. It’s this latter version that still leads crowds of children in red or blue ‘happi’ through the streets of their neighborhoods each autumn, following the sound of drums as they carry a stone or heavy wooden weight supported by ropes. At each crossroads, the children pause to raise and drop the stone repeatedly, hammering the ground rhythmically as they chant ‘Inoko, Inoko, Inoko Mochi Tsuite, Hanjose, Hanjose!’ This means, roughly, “Month of the boar, month of the boar, make rice cakes and prosper, prosper!” At the end of the procession, the adults in charge pass out snacks and the children go home tired and happy.

The festival has ritual elements associated with harvest, continued fertility, and protection from fire. But if you ask the children what it all means, they’re no more likely to have an answer than a child elsewhere might start to pick apart the strands of Celtic lore and medieval superstition lurking behind Halloween. The point, from children’s perspective, is the noise and the fun and the bag of treats. And that noise and fun, as well as a wish to revive the spirit of childhood on a grand scale, is the impetus for Hiroshima’s Grand Inoko Festival, which was launched in 1990.

In place of the tired grandfather wheeling a drum up and down the street, this festival’s music includes both traditional koto and flute as well as drums and more avant-garde performances. The festivities last longer, and there’s generally a lot more sake around. But most importantly, the stone at the heart of inoko has been reborn as a one and a half ton rock suspended by ropes from 88 bamboo poles, each 13 meters tall and ranged in a circle around the center of Fukuromachi Park, a short walk south of the Hondori shopping arcade. When the chanting begins and that boulder starts leaping up and down as the bamboo thrashes overhead, the child in you will be completely thrilled.

There’s plenty of room for the actual kids, too, of course. On Saturday, November 3, a children’s Inoko parade will kick things off from 13:00, moving through Hondori and Kinzagai. At 15:00, kids and parents are invited to lend a hand at the first raising and dropping of the stone. They can even pose for pictures atop the thing; that’s my own daughter at the top of this article. Children also have the chance to try their hand at making traditional bamboo toys like dragonflies and flutes, or roasting marshmallows on bamboo skewers.

Adults will get funny looks if they ask for a marshmallow, but if you’re hungry, the festival’s food stalls sell udon, wild boar, okonomiyaki, a “specialty grill” and the aforementioned sake, served naturally enough in bamboo cups.

Things wrap up on Sunday evening, with the traditional mochi cakes being handed out at 18:30, and a ceremonial cutting of the ropes at 20:00. On either Saturday or Sunday, the event runs from 13:00 to shortly after 20:00. Whenever you drop by, you’ll find something to do, eat, listen to or watch, and it’s worth rolling it into a day downtown and wandering to and from the festival over the course of a long afternoon and evening. It’s great fun and offers a real sense of community in the middle of the city.

Put it on your calendar!

Access: Nearby parking is all paid. The park is in the heart of downtown, so public transportation to Hondori is far and away the easiest option.

Admission: The food stalls charge. Otherwise, this event is free.