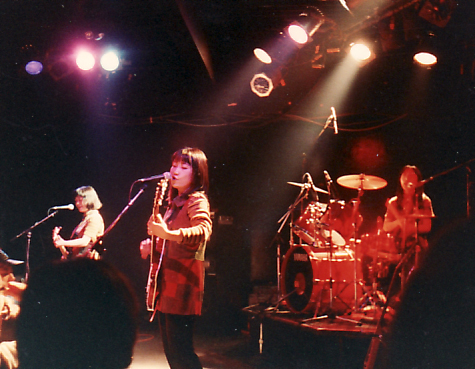 Kansai has been responsible for some great music over the years with everything from rock to electronic music to northern soul having its own distinct scene. Osaka in particular has rivaled Tokyo when it comes to producing globally influential acts. Here is a selection of some of the most successful great music from the region.

One of Kansai’s most successful exports but not exactly easy listening, the Boredoms emerged as part of the “Kansai noise scene” in the mid-80s. Part of the Osaka wave of experimental punk/noise bands of the era and led by Kobe-born Yamantaka Eye, the Boredoms were noted for their chaotic early live gigs and became a successful Japanese export on the underground music scene influencing popular US bands including Sonic Youth and Nirvana. The band’s international popularity peaked when they played Lollapalooza in America in 1994 but they continue to be regarded as one of the defining influences in experimental music, incorporating punk, rock, electronica, funk, and also a touch of tongue-in-cheek humor among other things. They are officially still together, although their last recorded LP came out in 2004.

Another popular export from the region to make an imprint on the international alternative music scene, Shonen Knife is well known for being a band that puts a smile and your face and a spring in your step. This all-girl quirky punk rock group has been described as “the Ramones meets the Supremes”. They formed in Osaka in 1981 but it wasn’t until a decade later that they burst onto the scene in countries such as the US and the UK feted by the likes of Nirvana’s Kurt Cobain and winning fans worldwide with their 1992 punk-pop album “Let’s Knife”. At the height of the band’s 90s popularity, they even were featured on the US cartoon Beavis and Butthead. Nearly 40 years on, Shonen Knife is still together and in 2019 released their 21st album “Sweet Candy Power”.

37-year-old singer-songwriter Ai Otsuka is one of Kansai’s most celebrated pop stars. Born in Osaka, she learned to play the piano at the age of 4 and has been writing songs since the age of 15. Most well-known for her 2003 hit “Sakuranbo” which stayed in the charts for nearly 2 years and was one of the best-selling Japanese pop songs in 2004. Otsuka joined the J-Pop band Rabbit in 2012 but continues also as a solo artist.

A Japanese band with an American sound and a French name (meaning “The Rainbow”), L’Arc-en-Ciel is one of Japan’s biggest rock bands. Influenced by the likes of Queen, Metallica, and U2, their sound spans rock, punk, goth, glam, and metal. The band formed in Osaka in 1991 and is still going strong nearly 30 years later. They have sold over 40 million records worldwide with their crowning achievement perhaps being the first Japanese band to headline Madison Square Garden when they played to a sold-out crowd in 2012.

Ego Wrappin is an Osaka-born jazz-rock duo featuring Yoshie Nakano and Masaki Mori. They came together in 1996 and, although they aren’t well known outside Japan, achieved nationwide fame in the early 2000s. Their music spans traditional rock, jazz-funk, and ska/rocksteady. Most of their material is written in English and are a popular fixture on the Japanese festival circuit.