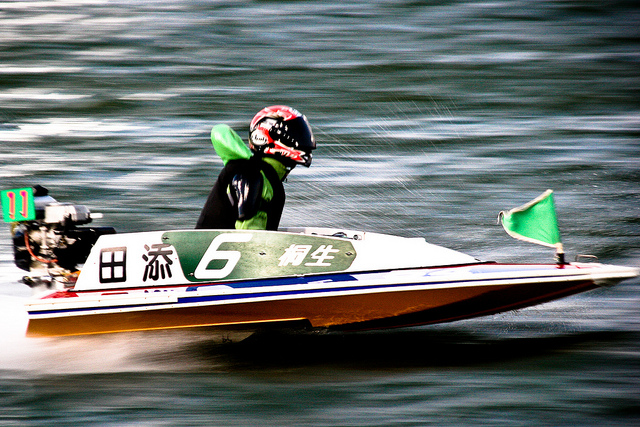 For the uninitiated, criticism of American NASCAR racing tends to center around the fact that it resembles little more than cars driving round and round an oval track. ‘Go straight, turn left’, critics may complain, lacks the necessary skills that, say, F1 requires.

And I have to admit, I am one of those people. However, just imagine if NASCAR was on water. Now that would be a spectacle, wouldn’t it?

About Boat Racing at Gamagori

Kyōtei, or BOAT RACE as it has been dubbed by sponsors, is an exhilarating competition that is, in this form, virtually unheard of outside of Japan.

Taking place on a 600-meter oval course, competitors on six small hydroplane boats (looking for all the world like suped-up jet skis) fly around at high speed, all vying to take the checkered flag.

Unusual to Kyotei is the way in which much of the action takes place in the build up to the two minute race. Employing the ‘flying start’ system, boats are signaled to leave their docks in order to find a starting position, with a one minute countdown before ‘go time’.

Then, at around 12 seconds before the clock hits zero, the boats hammer towards the start line at full speed, jockeying (pun very much intended) for position, at times crashing into each other, something the locals like to call ‘physical water combat’, in order to get the best start. Crossing the starting line either early – before the clock reaches zero – or late – over one second after – results in a disqualification*. Then, with the race underway, the boats hurtle round the course three times, aquaplaning around the corners at high speed. It is at these times, when collisions frequently occur – whether purposefully or otherwise (see 2:35 on the video below) – that the crowd becomes particularly involved, as this can be where money is lost or won.

Japan has something of an unusual relationahip with gambling. Casinos are banned, as are most forms of sports betting. However, some activites such as the lottery are allowed, and pachinko players hop through a loophole letting them ‘sell’ the prizes they win. The other form of acceptable gambling is in the ‘Public Sports’ of horse racing, bicycle racing, speedway and motorboat racing.

This means that a major draw of kyōtei for Japanese is that it gives spectators an opportunity to bet on the races, with revenues raised used to support a wide variety of initiatives, including those of the local municipalities as well as nonprofit organizations. Those placing wagers on races can purchase seven varieties of tickets, ranging from bets on one boat to win (tanshō) to as many as three boats to place or show (sanrenpuku) with bets made in 100 JPY increments and payouts divided from a collective pool. You can find a pretty decent explanation of how it all works here.**

As well as the entertainment in the water, some evenings also see special events with musical performances, and of course there are places where food and drinks can be purchased.

* If the boat you have placed a bet on is disqualified at the starting line for this infringement you will have your stake returned.

**Please remember that, if you are looking to place bets on races, gambling is addictive. If you will gamble, gamble responsibly. As one UK based gambling awareness website has it: when the fun stops, stop!