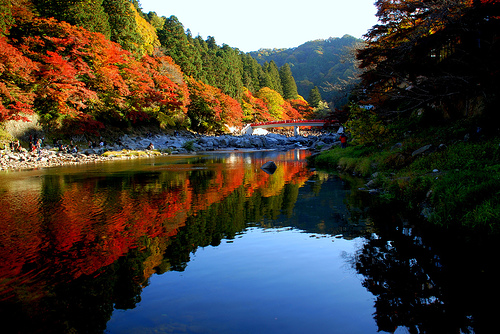 The Japanese are very conscious of the seasons changing around them, often celebrating little, or not so little, milestones between each to mark the transitions between their much-touted “4 distinct seasons.” Long sleeve or short sleeve shirts, for example, are there one day but gone the next as the season officially ends for them. Similarly, spring and fall enjoy their own milestones, “hanami” and “koyo,” and taking a moment to enjoy “the moment” of each is a national obsession.

Viewing the changing colors of fall leaves, which is called either koyo or momoji in Japanese depending on the type of tree viewed, is Japan’s autumn answer to the more famous cherry blossom viewing of spring; a traditional chance to get outdoors to live in the moment of the season, and to reflect on the impermanence of it all. Since ancient times in Japan, this urge to experience the beauty of the changing seasons has been custom; you can find it referenced in the classical Heian Period (794 to 1185) novel “The Tale of the Genji;” one of the world’s first novels.

Starting in mid-September, the “koyo front” slowly moves its bands of color south from Hokkaido to central and southern Japan and the end of November, where it turns to winter. Many families will head to local parks or the mountains and countryside to enjoy the cooling temperatures and spectacular views of changing leaves.  While some people celebrate the leaves much like they do the flower petals of spring, by spreading out a blanket beneath them for feasting and drinking, it is more common for koyo to be celebrated by taking a short hike through the mountains or walk in certain areas of the city where the trees can be found.

Nagoya usually enjoys its turn in early to mid-November. If you are looking for an excuse to play outside, this a good one.  Why not try one of these spots in the Nagoya area? The most famous and crowded local area to enjoy koyo is Korankei Gorge in Asuke City, near Toyota City. Korankei is a beautiful ravine that connects the Tomoe River and the Iimori Mountains. Its 4,000 maple trees, reportedly planted by local monks, explode with vibrant red, yellow, and orange leaves every fall and brings throngs of families and couples during the season to this small town.

Korankei’s maples begin to turn in October but usually reach full color in early to mid-November.  Starting November 1st, the trees will be lit from below by floodlights, giving the area a magical atmosphere where couples can be seen walking hand in hand. Many of Korankei’s 4000 maples remain “illuminated” the entire month of November, daily from sunset until 9 pm.

There are plenty of stalls selling food and drink and more than enough park to wander a couple of hours in.  Though difficult to get to due to heavy traffic, this is a highly recommended destination. If you are coming by car, take route 153 from Toyota city to Asuke City.

There is always a lot of traffic during November, and it may take you quite some time to get there and park before you can enjoy the scenery, but it is worth the trek! If the thought of fighting traffic to experience Asuke Town and Korankei Gorge is too much for you, you might find a trip to Nagoya’s Higashiyama Zoo and Botanical Gardens a much more convenient option. Higashiyama Zoo and Botanical Gardens are located near Higashiyama Koen Station on the yellow line. While the koyo experience is much smaller and lacks the grandeur of Koranke, the zoo’s 500 Hananoki Maple trees are still very nice. If you are looking for a quick and easy way to see the fall colors, this might be your best option. (Not sure exactly, but I think you can walk the grounds outside the actual zoo making the hours irrelevant.) Located next to the Tokugawa Art Museum, which features diverse and impressive collections built and handed down through the Tokugawa family line, Tokugawaen is a garden designed in the mainstream style of major daimyo gardens from the Edo period. In it, a clear stream flows from a waterfall through the ravine until it reaches a pond representing the ocean, symbolically condensing the landscape of Japan’s natural splendor. The garden is lovely in any season, none more so than fall. You can get there on the Nagoya Kanko Route Bus leaving from bus stop 8 in front of JR Nagoya Station, or use the directions here. Like Tokugawaen, this is another beautiful Japanese garden with a real historical feel and a natural world theme. Covering more than 3.5 hectares, it is an expansive garden of ponds, copses, and rivers, the main one representing the Kiso river and stems from a large mound representing Mt. Ontake.

In fall months, the garden is a mass of greens, golds, and yellows, and though many locals come to wander around and take photos, it is large enough not to feel crowded. When you have finished, why not take a break to sit in the Seiu-tei, a complex of tea ceremony rooms built in the image of a swan, or ‘shirotori,’ flying down to rest its wings. Although Okazaki Park is best known for being listed among “Japan’s Top 100 Cherry Blossom Spots”, it is also well worth visiting during the autumn when the leaves begin to change. Trees fill the park, line the Oto River, and surround the castle.

When in the area, take a moment to revel in the park’s history. It has a long association with samurai. The nearby Mikawa Warrior and Ieyasu Museum, dedicated to the great shogun born in the castle, Tokugawa Ieyasu, is well worth visiting. Near to the Nagano border, this stunning mountain is the tallest in Aichi and a popular ski resort in winter. However, in the fall, its slopes are beautiful to walk amongst as the trees that line them go through their annual change, turning all the shades of gorgeous golds and reds against the backdrop of the clear blue mountain sky.

Starting in mid-September and going on until early-November is the Aki-no-Chausuyama Kogen Matsuri (fall festival), but the best time to visit is in October thanks to the nightly illuminations setting the trees aglow. The website for last year’s event can be found here.

Due to its location, it’s not the easiest of areas to access, and you’ll need a car to get there. Still, if you can make it and have the energy for the climb, the views certainly make up for any difficulties.

In Gifu, Yoro no Taki, or Yoro Falls, about an hour outside of Nagoya, is located in Yoro Town. The waterfall itself is about 32 meters high, 4 meters wide, and is one of Japan’s top 100 waterfalls. The water from the falls is famously high quality and is said to have rejuvenating powers.

It can be reached by taking the JR Tokaido Line from Nagoya Station to Ogaki Station (30 minutes, 740yen). From Ogaki, you must transfer to a private rail line for the remaining leg of the journey to Yoro Tetsudo Station (25 minutes, 400yen). From there, it is about a 20-minute walk to the park or a quick cab ride if you prefer.

Read a full JIS article about Yoro No Taki here.

Inuyama Castle sits below Inuyama City, overlooking the Kiso River and across that, Gifu Prefecture. Inuyama Castle is one of only 12 extant castles in Japan built before the Edo period. Until recently, it was the only castle in Japan still in private hands. The previous owners, who had held it nearly continuously since the 1600s, turned it over to the City of Inuyama in 2004. The castle and surrounding area are lovely in fall. A walk along the river is almost as good as visiting the castle itself!

The castle is 15 minutes walk from Inuyama Yuen Station on the Meitetsu line, about 40 minutes outside of Nagoya.

As a bonus, while visiting the castle, you could also visit…

Jakkoin Temple, or “Owari nomomijidera,” is probably one of the best places on this list but the least accessible.  The temple is halfway up a mountain and requires some hiking to reach it.  My suggestion would be to start at the castle, work your way up the river on foot, and then head up Mt. Tsugao to the temple. This is less than an hour’s walk and approximately 15 minutes hiking up the mountain from the riverside off the top of my head. The main hall of Jakkoin Buddhist Temple is emblazoned with over 1,000 Japanese maples every fall, and their fiery reds and orange are quite lovely. Besides the temple itself, its position on the mountain affords the intrepid visitor a view of the surrounding area below, which is also quite colorful. So you probably know all about the sakura, or cherry blossom, that appear in spring, right? But were you aware that some species also blossom in fall too? The sakura variety that grows in Obara’s small Aichi town is called Shikizakura (four-season cherry blossom). It blooms twice in a year, once in spring and again between October and early December, just simultaneously as the other trees in the area are turning red and golden. This phenomenon – at which you can see the turning maple and the blooming blossom simultaneously, brings thousands of tourists to the town each year. If you want to turn your autumn hunt for turning colors into a bit of adventure, then you should head to Mount Horaiji (Horaijisan) near Shinshiro. With 1,425 stone steps, the trail that leads halfway up the mountain to the 1300-year-old Horaiji Temple takes some doing. However, you will be rewarded with some stunning scenery as the temple sits below a massive sheer stone cliff face. All around, you can see the gorgeous turning trees. Usually, the area hosts the Horaiji Maple Festival, where all manner of events are staged, and local specialties are sold. However, it has been suspended in 2020 due to the coronavirus pandemic. 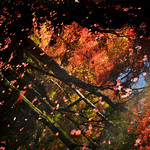 Seto City’s Jokoji Park is well known for its sakura, but the fall colors are just as beautiful at this time of the year. Jokoji temple, situated up the hill, was built in 1336. Its main hall and the mausoleum for Tokugawa Yoshinao are designated as Important Cultural Properties of the nation. The path up to it is a hiking trail, but reach the top, and you are rewarded with beautiful panoramic views from the observation deck.

If you don’t fancy the walk, the park itself has a delightful pond and grassy area. Ordinarily, the month of November sees the Autumn Leaves Festival, with food stalls selling local delicacies such as Gohei Mochi and Mitarashi dango and holding outdoor events. However, unfortunately, it is suspended in 2020 due to the coronavirus pandemic. 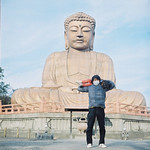 If you want to throw in a little religion with your autumn foliage, check out Shurakuen Park in Tokai City. Here there are some 750 maple trees of seven different varieties, but perhaps even more impressive is that you can see the largest Buddha statue in Japan, standing (or rather, sitting) almost 19 meters tall.

The park is a great place to bring kids, too, as it has numerous recreational facilities, including a large pond, a playground, and lawns on which to loll. You can even enjoy a refreshing cup of green tea at the matcha house.