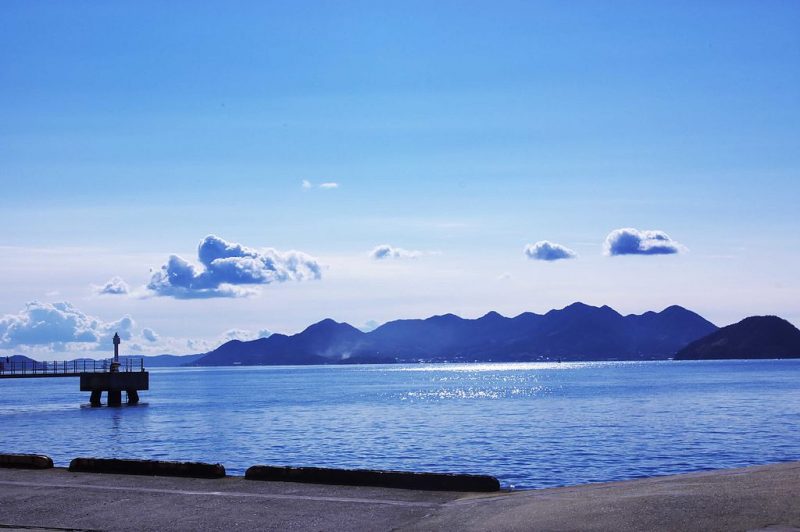 Hiroshima faces on to the Seto Inland Sea dotted with islands. The Japanese Aegean? Not quite, but hey, it’s fine to wax romantic.

Of course, the title is not literal. Still, as you may imagine, these islands offer a veritable treasure trove of opportunities to explore, not to be passed up – especially with the current social distancing measures.

Etajima is a fabulous visit for either trekking or cycling. To begin, a little trivia of sorts. It is also known as Nomi-jima but more commonly as Etajima. And best known as the home to the former Imperial Japanese Naval Academy (circa 1888) and still exists under the name Naval Academy Etajima, but modern Etajima is concerned instead with olive cultivation and fish hatcheries in Etajima Bay north of the island.

The academy still retains many of its original features. The facilities serve as a Japan Maritime Self-Defense Force Officer Candidate School. Nearby stands a white western-style villa. “Kaiyusha” was built at the end of the Meiji period as a meeting place for lower-ranking officers and sailors and has been maintained that its appearance remained unchanged. The brick foundations, the weatherboard walls, the sash windows, even the distorted glass are all original and practically the same as they have always been.

The island is flanked by oyster rafts, crystal clear water, beaches where a beachcomber will find all kinds of debris. Shipbuilding yards interrupted by mikan (tangerine) groves. Round a corner, and you may come across a military firing range or a beached ship carcass being scrapped. The island is a plethora of sharp contrasts and is always interesting and very earthy and real.

Access
Ride-on ride-off ferries from Ujina (Hiroshima) Port run to Kirikushi and Mitaka on the northern coast of Etajima in 25-40min. You can also take ferries from Kure’s central ferry terminal and Kure Portopia Park to Koyo Port on the west coast.

Use a free Setouchi Cycruise (“cycle” + “cruise”) ferry pass available at Ujina Port to take your bike on board to and from Etajima for free. The pass is valid for 3 days.

Navigating
Many road signs are written in roman characters. Get a grasp of the port names and follow the (sometimes intermittent) blue cycle line, and you should be fine. Get a “Cycle island Etajima” map at Ujina Port.

Cycle Rental
A variety of bikes are available for rent at Etajima’s ports & the Furusato Kouryukan Cycle Station near the Former Imperial Naval Academy between 9 pm and 4 pm. If you’re going on a weekend, reserve a couple of days in advance; weekdays (especially off-season) bikes are usually available.

¥1000 deposit + ¥500 (¥1000 for an electric power-assist bike)
A bike can be dropped off at any rental cycle point, but you will forfeit the deposit unless returned to the original rental location. You can reserve two days in advance on 0823-42-4871.

There are several markets and convenience stores, but if availing of the eateries, it might be wise to lunch early or miss out. Fresh sashimi from the seafood market or the tofu udon noodles at Sakura is a recommendation. It might be wise to carry some emergency provisions just in case.