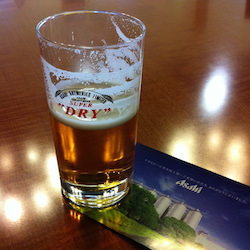 When it comes to alcoholic beverages, the Japanese are most proud of its sake and rightly so. However, while sake is one of the most recognisable totems of Japanese culture, outside of the country, you’ll be hard pressed to find many people who regularly drink it. Yet, when it comes to Asahi Super Dry, it is a different story altogether. Pretty much every sushi or noodle bar worldwide is stocked with the famous silver bottles.

Asahi is of course one of Japan’s biggest brewers, which means that vast quantities of beer are made in factories all over the country. One of them is here in Nagoya and, for absolutely no charge, you can take a trip around.

After getting picked up from Shin-Moriyama station on the free shuttle bus you can be led around the factory floor to learn about the beer making process and history of the Asahi company. You can witness the marvel of modern machinery, and hide your jealousy of the official beer tasters whose job is to sip two bottles of beer every day.

Around three hundred people take the tour daily, with coach trips coming from as far as China and Korea to see how the famous beer is made. However visitors wanting to see the factory in motion must visit on weekdays and non-holidays, as the factory closes on Saturdays and Sundays. Should you visit on one of these days, you will instead be shown an interesting film of the factory in full flow.

The tour itself takes approximately 55 minutes to complete, and at the end you are shown to the bar. There you have twenty minutes to test three of Asahi’s main draft beers: Asahi Premium, Asahi Black and, of course Asahi Super Dry. There is a three drink limit, however anecdotal evidence shows that this is not always strictly adhered to. For those who do not wish to drink beer, are under 20 years of age, or are driving there is a wide range of soft drinks to choose from.

There is of course the somewhat obligatory tour gift shop, but it is unobtrusive and, well, it sells beer, so there can surely be no complaints in that department. After you have finished your shopping, should you be so inclined, the shuttle bus can return you to the station.

The tours are available daily from 09:30 with the final tour starting at 15:30. If you don’t want to take the free bus, the factory is a fifteen minute walk from Shin-Moriyama station. Reservations are a must and tours in Japanese can be booked online (www.asahibeer.co.jp/brewery/nagoya/). If you would like to be accompanied by an English speaking guide these can be arranged by calling 052-792-8966 between 08:30 and 17:00.