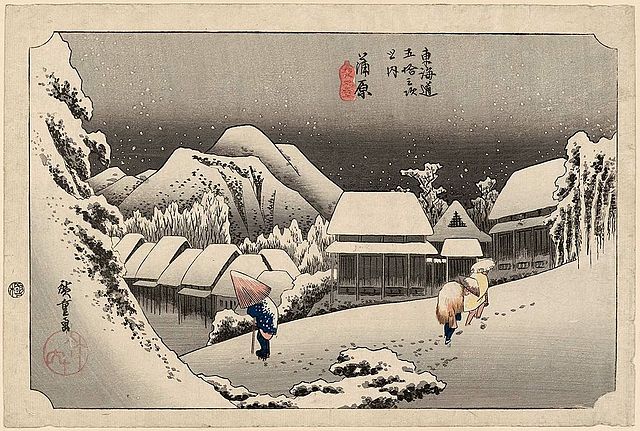 While not usually considered a cultural heartland of art, like Tokyo, there are actually plenty of great exhibitions to see in the city. Below is our pick of the bunch for this May.

For anyone who has done a bit of traveling around Japan, or is perhaps planning to do so, this is an absolute must see. Utagawa Hirose (1797 – 1858) is considered to be the last great master of the ukiyo-e medium (wood block printing), and this is seen as being his finest work. The exhibition shows Utagawa’s impression of the 53 trading stations along the Tôkaidô road that connected the financial capital city of Edo (now Tokyo) with the spiritual capital of Kyoto, with the series becoming the best sold ever ukiyo-e Japanese prints. Even were the the display not enchanting and beautiful in equal measures, it also give the modern viewer a chance to see some locations that they may have visited in a completely different light.

A finer example of ‘how the other half lived’ during the Edo Period you are unlikely to see. Chiyohime, the eldest daughter of Iemitsu, the third Tokugawa shogun was in 1639, at two years old, betrothed to Mitsutomo, the second lord of the Owari Tokugawa family. Not such an exciting event for an infant, you might imagine, but still she was given as a gift a remarkable trousseau that is here on display, and considered to be the most luxurious example of its kind in Japan. The items range from large furnishings and palanquins down to the most delicate of cosmetics appliances, all of which are made of the finest maki-e inlaid lacquer, the design of which is based on the “Hatsune” (first warbler) chapter of The Tale of Genji. Seventy-five of the items are designated as National Treasures and, with an alternative name of “Furnishings from Dawn to Dusk,” due to the fact that one would never tire of looking at them, as far as matching luggage goes, they make Louis Vuitton look cheap imitation. Moving away from Edo era Japan, but remaining with furniture, The Aichi Prefectural Museum of Art is celebrating the 100th anniversary of Finland’s independence with this showcase of contemporary product design. Whether Marimekko textiles or Artek furniture, the Finns are renowned for design of stylish elegance with a playful edge that remains fresh and in vogue. This exhibition, made up of approximately 700 works through a variety of furniture, tablewares, and textiles, provides a comprehensive introduction to Finnish design that demonstrates the harmony that rests between nature, people, and the spaces they share.

The Development of Japanese Modern Photography in Manchuria

Imperial Japan’s excursions into Manchuria following the end of the Russo-Japanese War were cemented by the Treaty of Portsmouth that gave Japan control of the southern portion of the Chinese Eastern Railway as well as lucrative mining rights in 1905. The following year Japan established the South Manchoukuo Railway Company and embarked upon an immense colonization program, and photographs of of the area were used to publicize the land of China to the people of Japan. These photographs began as simple portrayals of Chinese tribes and their cultures, and developed into sophisticated symbols with the emergence of the Graphism era. This exhibition features rare vintage prints showing how the photographic expression of Manchoukuo developed over a quarter of a century, paralleling the Japanese Modernism movement.

Image by Utagawa (Own work) [Public Domain], via wikipedia.com (modified)