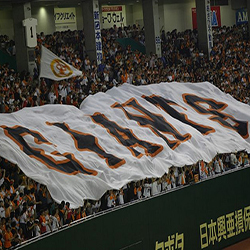 When the Tokugawa Shogunate finally wrested political control from Osaka and moved the seat of power to Edo in 1615, few could have imagined that four hundred years later animosity and hostilities between the two cities would remain. However each spring, the battle recommences in the form of the perennial contest between the country’s two great baseball teams, Tokyo’s Yomiuri Giants and Osaka’s Hanshin Tigers.

Who are the Yomiuri Giants?

The first professional baseball team in Japan, The Great Japan Tokyo Baseball Club (as they were then called) were formed in 1934 to compete against an American All-Star team featuring such luminaries of the game as Babe Ruth and Lou Gehrig. When the Japanese Baseball League formed in 1936 they took the name Tokyo Kyojin (Japanese for ‘giants’) before adopting the name Yomiuri Giants after their corporate sponsor in 1947.

While their name and uniform were adopted from the New York (now San Francisco) Giants, they are more readily compared to the New York Yankees due to their dominance, having won the Central League pennant 36 times and the Japan Series 22 times. They are also one of the most widely supported teams in the country, although they are arguably one of the most disliked, with supporters of other teams signaling them out for particular antipathy.

Who are the Hanshin Tigers?

The Hanshin Tigers are the second oldest professional team in Japan, and are named after the Hanshin Electric Railway company that owns them. Originally called Osaka Tigers, they play at Koshien Stadium, the oldest ballpark in Japan, revered as sacred, where players traditionally bow before entering and leaving the field.

Their fans are considered amongst the most passionate in the game, and in each of the 2005, 2006, 2007 and 2009 seasons attracted more than three million spectators. However, despite this support, the Tigers are considered to be something of underachievers, having won the Central League a mere five times, and the Japan Series only once.

This failing to turn support into success has been blamed in recent years on The Curse of the Colonel. During celebrations of their sole Japan Series win in 1985, revelers shouted a roll call of the triumphant team, and fans who resembled the player jumped into the Dotonbori Canal. When no one could be found who looked like bearded American homerun hero Randy Bass, a statue of Colonel Sanders was thrown in. It was since believed that they would never win the title again until the KFC statue was recovered (though construction workers retrieved it in 2009 to little effect).

The rivalry between Yomiuri Giants and Hanshin Tigers

Perhaps the true reason for the Tigers’ continued failings is the dominance of their Tokyo rivals. At the birth of the Japanese League the Tigers were considered the preeminent team in Japan, but from 1939 the Giants took control. The Giants have since pipped the Osaka team to the Central League no fewer than 14 times, and it is possibly this reason for which Tigers fans dislike the Giants with such a passion. There is of course the continued Kanto and Kansai rivalry in all walks of Japanese life, but another reason for this animosity is the way that the national media, including that of the Yomiuri Group that owns it, has a tendency to paint the Tokyo team as ‘Japan’s Team’.

The rivalry between the two teams, one often compared to that of the New York Yankees and the Boston Red Sox, is perhaps best summed up by The Emperor’s Game, the most famous game in Japanese professional baseball history. The two teams faced each other on June 25, 1959 at Yomiuri’s previous home, Korakuen Stadium. When these two titans of the game line up, it is always a dramatic occasion, but this meeting was particularly special, as it marked the first time Emperor Hirohito had ever attended a baseball game.

The players were tense, and according to Rob Fitts’ biography of Giants star Wally Yonamine “for many of the players, performing in front of the Emperor was more significant than playing in the Japan Series.” The game however, did not disappoint. Like the history of the sport, it was Tigers who went ahead in the tight battle. The Giants then took the lead, as supremacy swung back and forth between the closely matched opponents, until it rested at 4-4 in the 9th inning.

As the Emperor had another engagement, and with the game heading for extra innings, his Highness waited to watch big hitter Shigeo Nagashima one last time. With the count at 2-2, Nagashima sent the ball ten rows into the leftfield stands. As the Giants players celebrated, The Emperor and Empress bowed slightly and left the stadium. The Giants were victorious.

The professional baseball season in Japan begins with spring training in February and March, and continues with regular season games happening almost every day from late March or early April until October, and it is in the shadow of this bitter rivalry – two old clubs, one passionate, individualistic, idealistic; the other strong, the embodiment of the sport, metronomic in their success – that each new season begins.

You can find more information on buying tickets by clicking through to this article, also on Japan Info Swap:  Take Me Out to the Ball Game: Baseball Tickets in Japan

Image: By Vector version by Fred the Oyster [Public domain], via Wikimedia Commons