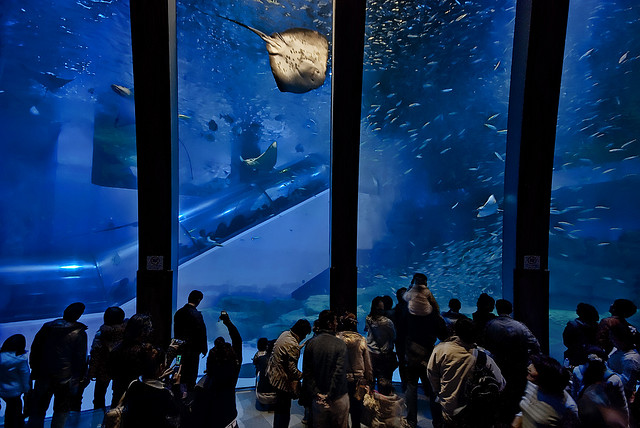 Despite being the second largest city in Japan, the port city of Yokohama sometimes gets dismissed as a satellite town to the ever sprawling metropolis of Tokyo. And while it is true that the capital’s close proximity can cast something of a pretty big shadow, and that by comparison it has something of a ‘charming town’ vibe, Yokohama has plenty of wonderful things to see and do. With this in mind, being just a 30 minute train journey from Tokyo Station, it makes it the perfect location for a family daytrip. A manmade island built at the tip of Yokohama Bay, you can spend an entire day at Hakkejima Sea Paradise. Admission to the island itself is free, so you can wander the grounds, have a picnic in the park and take long, leisurely strolls at no cost. However, there is a good chance that you won’t want to miss out on the action. For a start there is the three-story high aquaruim that, with more than 100,000 creatures, is Japan’s largest collection of sealife. Then there are the amusements including Japan’s first surf coaster that swings out over the water and Blue Fall, a 107m vertical drop ride. For the peckish and those wanting to pick up souvenirs there are plenty of restaurants and stores in which to wander.

Created where Yokohama Exotic Showcase was held in 1989, Minato Mirai is another area packed to the rafters with things to see and do. One of the standout attractions is the Cup Noodle museum that features a restaurant selling noodles from around the world, and two workshops in which you can design your own original cup noodle, or the particuilarly child-friendly Chicken Ramen factory where kids can make their own ramen.

West of JR Sakuragicho Station, you can find Nogeyama Park and Nogeyama Zoo with about 1,500 animals of 90 species. Younger children will enjoy Anpanman Land and KID-O-KID Borneland, an educational  indoor play facility where children and parents can learn as they play. For the older child, it’s well worth checking out the Nippon Maru and Yokohama Port Museum and the Mitsubishi Minatomirai Industrial Museum exhibiting all sorts of technological marvels including rocket engines, futuristic fork lifts and a deep sea submersible research vessel. After all of that child’s play, you will probably be just about ready for a bit of lunch and retail therapy, which brings us nicely to Yokohama Redbrick Warehouse. Built between 1899 and 1905, the bonded warehouses were part of the Meiji era harbour construction that, as part of Japan’s modern port, welcomed the world for the first time. Today they act as a large dining and shopping complex and exhibition center for all manner of cultural events. There is also a large grassy area upon which to lounge on sunny days. If the kids aren’t tired out from the theme parks, then you can take them down to Yamashita Park. Famed for its views of Yokohama port, this seaside park – Japan’s first – is a 700m stretch of greenery in which people of all ages come for recreation. Alongside the park is the gigantic ocean liner-cum-maritime museum Hikawa Maru that ran theYokohama-Vancouver/Seattle line from 1930 housing all manner of VIPs from Charlie Chaplin to the Imperial family. Next to the Hikawa Maru is Yokohama Marine Tower that, with a 100m high 360 degree panoramic viewing deck, is ideal for watching night fall over the city. Yokohama’s Chinatown is not only the largest in Japan but also in Asia, and there are roughly 250 Chinese-owned/themed shops and restaurants throughout the district, the highest concentration of which are centered on a 300 square metre area. While it is a great place to visit at any time of the day, it is in the evening when things in ‘Yokohama Chukagai’ really livens up.

There are all manner of stores selling bric-a-brac and Chinese cultural items, but it is the food that is the biggest drawer. With dozens of restaurants, mostly offering discount set courses it is a great place to eat. If you don’t want a full meal there are plenty of stalls and standing restaurants, including one claiming to be the purveyors of the world’s best nikuman: a bold claim. Chinese New Year is a particularly lively time to visit.

Dolphin Photo by Patrik Jones [CC BY 2.0], via Wikimedia Commons