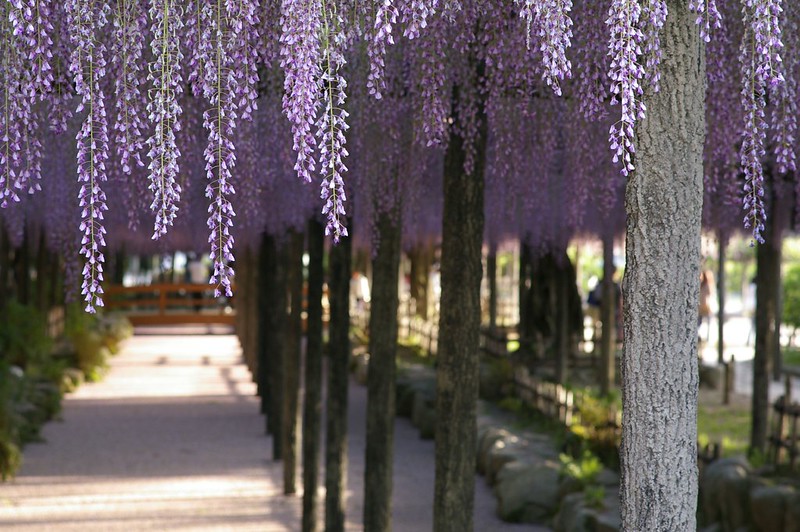 There can be absolutely no doubt that in Japan, the month of April is very much the month the cherry blossom tree. However, as quickly as it has come, the season has gone. Time has taken its toll on the delicate sakura, and the wind and rain of spring have shaken the petals from the trees.

But in Aichi, this does not mean that the season for ‘hanami’ [flower viewing] is over and done with. No, far from it. Because, though the whites and pinks of the sakura have long gone by late April, it is soon replaced in the hearts of the Japanese by pinks and purples of ‘fuji’. And no, not the mountain, I am of course talking about wisteria.

Symbolizing immortality and longevity, with its fragrant perfume and long vines, wisteria is one of the most beloved spring flowers in Japan and has long been a muse to poets and artists, inspiring one of the most famous Kabuki dances “Fuji Musume” [The Maiden Wisteria]. The flower gained even greater importance during the Heian period (794-1192 AD), when it was adopted as the family symbol of the Fujiwara clan, one of the four great ruling families of the era.

Today, all over the country you can find festivals dedicated to wisteria, and people come from far and wide to wander, relax and take photographs beneath tunnels of these beautiful buds. Aichi is, of course, no different, and from mid-April to early May there are a number of events across the prefecture where you can enjoy their annual bloom.

In historical times, Tsushima was known as Fujinami-no-sato, the village of wisteria, and it is said that the wisteria trellis in the Tennogawa Park was the first in Japan. Today there are 114 trees of 12 variety of wisteria all around the pond, and the festival, running from the end of April to early May, is possibly the biggest in Aichi. 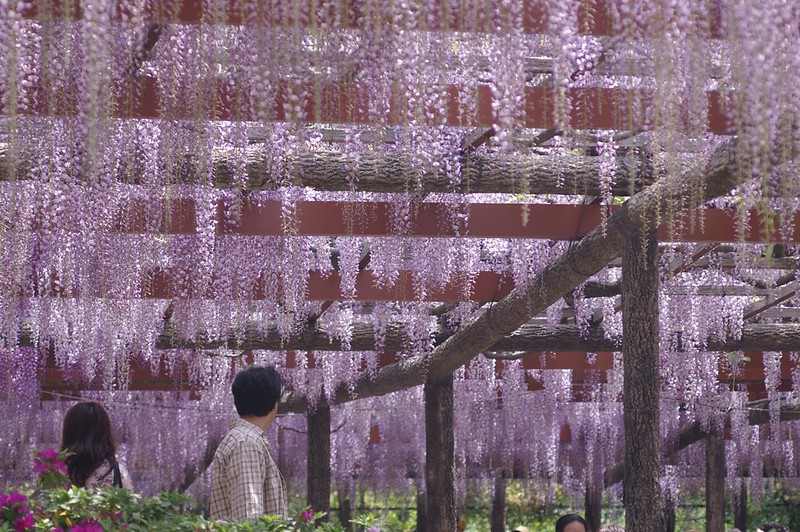 The trees are lit up in the evening, from 18:00 to 21:00, and there are food stalls and events held throughout the duration.

The city of Konan is famous for its Wisteria – to the extent that the high school is not allowed to expand their playing fields as the flowers on the grounds are considered of greater importance. 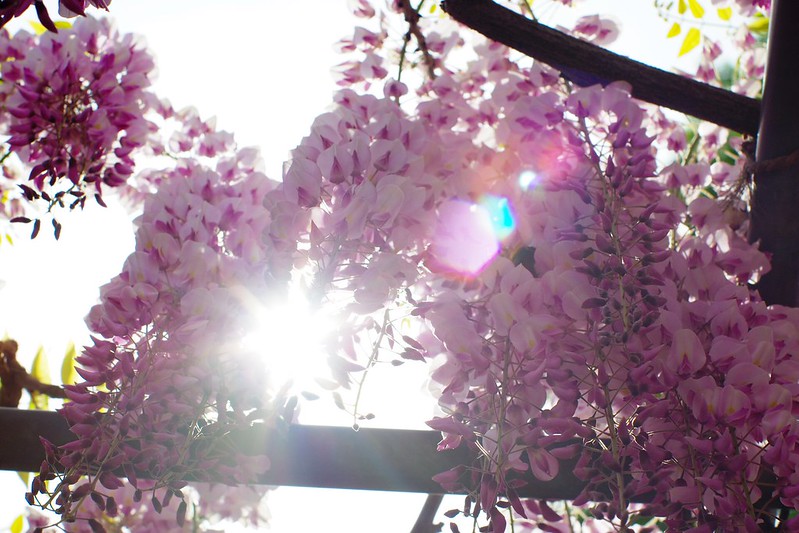 Intrinsic to this fame is Mandara Park, the site next to the 14th century Mandara Temple that has pergolas displaying around 60 wisterias of 12 varieties. With pinks, white and purples – as well as the peonies that are blooming at the same time – the site is a beautiful spot for the yearly festival, which also includes a parade of seven Sengoku period warlords connected with the city. The festival takes place from April 20 to May 6.

As well as being the birthplace of the great shogun Tokugawa Ieyasu, the area around Okazaki Castle is also well known for being one of Aichi’s best places to see cherry blossoms. However, the Gomangoku Fuji, the wisteria that can be found along the south side of Okazaki Park, are just as beautiful. 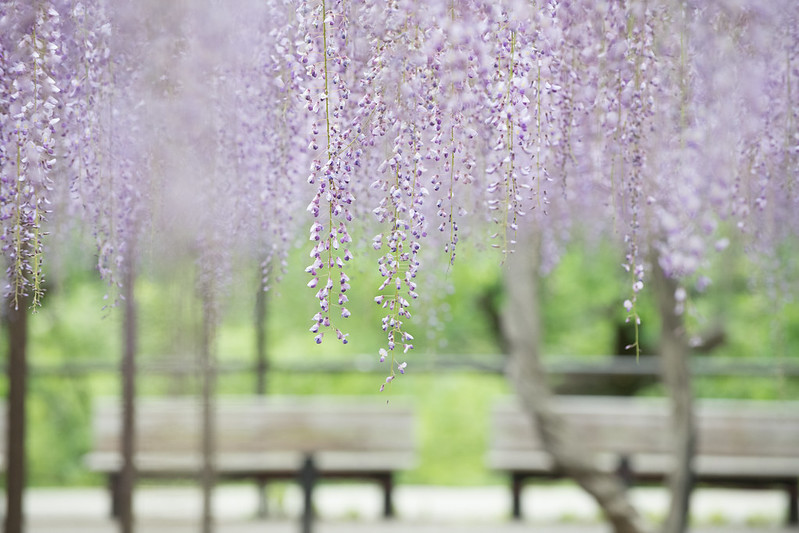 The official flower of the city, the Gomangoku Fuji is designated as a cultural asset, and covers 1,300 square meters which, when lit up during festival evenings – April 20 to May 6 – make for a dramatic sight.

Kotoen Garden in Hekinan City is home to two distinct wisterias, the sweet-smelling Daruma Fuji and the famous Nagafuji, best known as Hiro no Nagafuji. 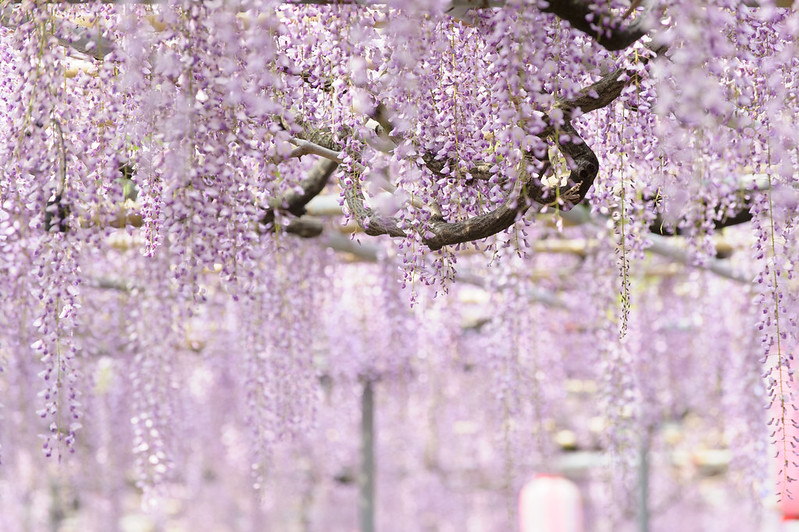 The garden, built around 1820, spans some 1,000 square meters, and each year, until May 6, locals will flock to see the Hiro no Nagafuji which can hang in clusters some 1.5 meters from their overhead pergolas.

Held during the Golden Week celebrations in Toyota’s Mitsukuri-cho, this an event dedicated to the glory of all things wisteria. In fact, this area is so synonymous with wisteria that it was at one time called Fujioka, literally Wisteria Hills. 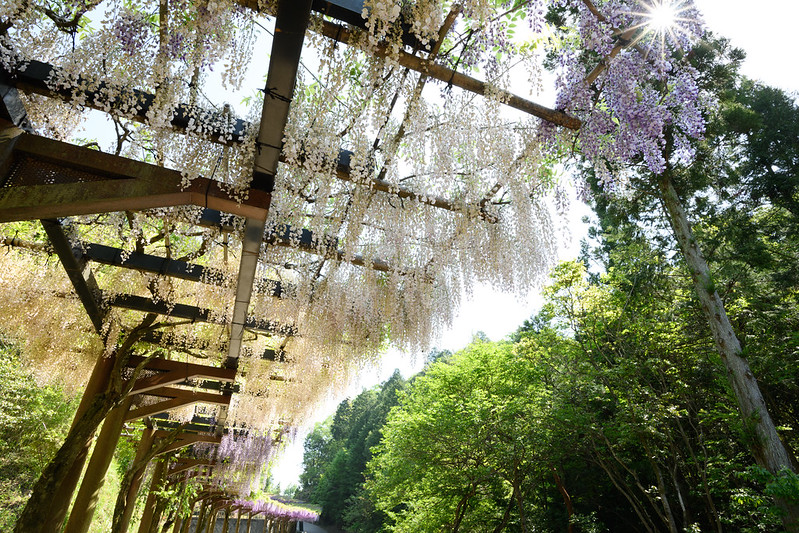 Fuji-no-Kairo (Wisteria Alley) is a 370-meter stretch of wisteria pergolas of four different types for you to wander along. As well as the flowers there are musical concerts, handicraft shops, plus demonstrations of Bo-no-Te (“Hand-on-Pole”) martial arts.