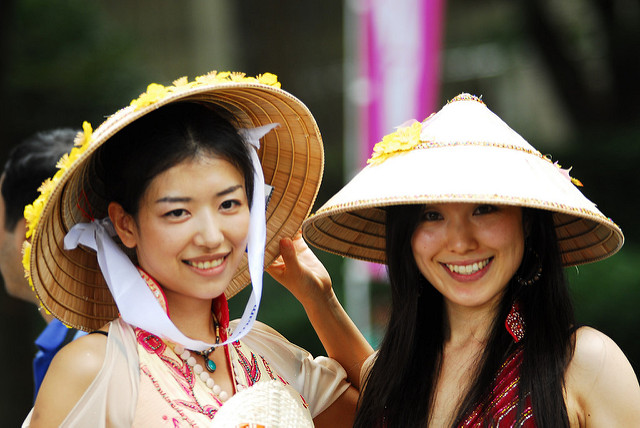 Some years ago, as those with youth and a seeming abundance of time on their hands tend to do, I went backpacking around South East Asia. Whilst there I fell deeply in love with Vietnam. Its scenery was staggering, its people were on the whole cheerful, and the food… My gosh the food!

If you’ve not had the pleasure, you can make up for it by popping over to the Vietnam Festival.

Yoyogi Park’s annual Vietnam Festival began in 2008 as a way of celebrating 35 years of international relations between Japan and Vietnam, and is a bright and exciting glimpse into the life of the South East Asian country. Created to promote cross-cultural understanding between the two countries it has grown exponentially, with nearly 200,000 visitors expected this year, and features music performances and other attractions that capture the nation’s charm.

The park in Shibuya will be awash with vendors in their Vietnam flag t-shirts and with nón lá conical hats upon their heads operating over 100 booths selling clothes, keepsakes, and of course food… Lord help me, the food! Whether you are slurping on a steaming bowl of pho, munching on a pork-filled Bánh xèo rice cake, or chewing on my favourite, a prawn stuffed Bánh mì sandwhich (I know Asia isn’t known for its bread, but when the French who colonised the area finally returned to Europe, they left behind them a love for baguettes and cheese) you can wash it all down with a cool refreshing 333 or Saigon Beer.

But it’s not just the cuisine that gets the festival treatment. The wide range of performances to enjoy including traditional Water Puppet shows and other acts. If you want to look the part you can find vendors selling jewelry and traditional attire, such as the elegant ao dai (a Vietnamese dress) and the less elegant, but by no means less traditional nón lá (straw hat).

The festival promises to be a vibrant, enjoyable glimpse into Vietnamese culture with so much great food. Ooooooh, the food!

If you can’t make it to the festival, or you simply can’t wait, why not try one of these Vietnamese restaurants in the capital?

My-Le (pronounced Mee Lay) is not your fanciest of restaurants. Tucked away on a back street among love hotels and izakayas, it is a little rough around the edges. However, you shouldn’t let that put you off. Having been in business for some 20 plus years under various owners, its most recent incarnation is frequently considered to be amongst the best Vietnamese food in the city and has a bright and contemporary feel. Reservations are imperative.

A little closer to the center of the city, Vietnam Alice is a little more accessible than My-Le and is decidedly more upmarket (though still pretty affordable). Part of TV celebrity chef Yutaka Ishinabe’s Queen Alice chain, it serves fresh food including a wide array of pho noodle dishes. If you are unsure of what to go for, a good starter package is the Vietnam Alice Dinner Course, which includes a selection of spring rolls. Conveniently, the menu has the names of the dishes written in English.

Okay, Vietnamese Cyclo may not be the most authentic of Vietnamese restaurants, but it is well reviewed and is ideal if you are dining with people who have more mild palettes. It’s a stylish place just a couple minutes walk from Exit 3 of Roppongi Station, and the pho is pretty decent while the spring rolls are considered very good. The menu has English as well as photos, so it is easy to make selections and order.

Nha Vietnam was recommended by one of our staff in the Tokyo office!  The spring rolls are reportedly very good, as is its atmosphere and ambiance.  Come spend an evening in Ebisu, starting with some delicious Vietnamese food!