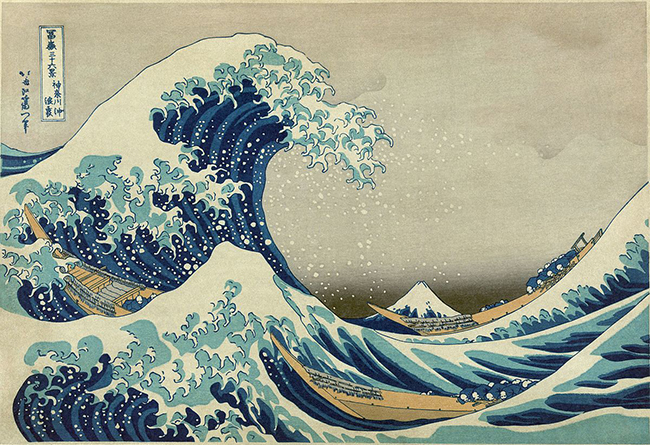 When one thinks of Japanese artwork, there is a good chance that the picture above, or one very much like it, is the one that springs to mind. There is a good reason for this. The art form of ukiyo-e, the style of painting using wooden block prints, has very much permeated every part of Japanese culture. Not only that, but as it was the predominant art form during the Edo period (1603-1868), a time when the country was sealed off from external influences, it is the first form of artwork that foreigners encountered when the fall of the bakufu saw the nation returned to the international community.

It is fair to say that ukiyo-e not only captures the imagination, but it is perhaps a direct antecedent from where the modern Japanese art scene springs.

While today ukiyo-e is perhaps thought of as being in the realm of the highbrow, this was not always the case.

The term ‘ukiyo’ is one that conjures up ideas of the transient and fleeting world, and in the prosperous times of the newly peaceful Tokugawa era, this came to mean, ‘the floating world’, a place of joy, fun and, debauchery. The place where this hedonism was most prevalent was in the entertainment districts, and it is the characters who inhabited these areas that were the initial focus of this burgeoning genre, with the most popular productions being bijin-ga (prints of beautiful women) and yakusha-e (prints of kabuki actors).

As the art form progressed, what started out as what we might recognize as glamour periodicals and posters of today, with the term ukiyo-e again altering in meaning to be ‘current, modern style’, they began to reflect more everyday aspects and served as a combination of accessible magazines, as well as souvenirs purchased following a trip to the expanding capital of Edo. It was an art form for the masses.

Ukiyo-e came out of the 15th century revival of the classical art form of yamato-e, with small figures and careful depictions of details of buildings and other objects. Yet, while this older genre often reflected past tales or narrative stories, the more modern ukio-e was set in the here and now, and this immediacy was reflected by the way it was produced.

In the early Edo period, ukiyo-e started as one-piece black-ink only woodblock prints, meaning that they could be easily created and distributed. Soon, as the genre grew in popularity, demand increased for colored prints, something that was achieved from the mid-18th century thanks to a rapid advance in technical development, with a procedure for adding color to the page using multiple woodblocks coming into practice, an example of which you can see in the above video.

In this way, to meet the ever increasing demand, ukiyo-e prints became the work of teams of artisans, with carvings being created from an artist’s design. Labour was divided into four groups: the publisher, who commissioned, promoted, and distributed the prints; the artists, who provided the design image; the woodcarvers, who prepared the woodblocks for printing; and the printers, who made impressions of the woodblocks on paper.

It was in this way that the art form was able to reach its increasing audience to such a great effect.

The great artists of ukiyo-e Young Girl in the Snow

Perhaps the primary innovator of the genre, it was Harunobu who brought full color to the art form, thus rendering the previous three color printing style obsolete. Originally a talented, if not stand out artist, as a result of his social connections (his ancestor had been a retainer of Tokugawa Ieyasu) his work began to spread through the upper orders, and soon his innovation began to establish itself.

In his later years his vibrant, full colored prints of beautiful women dressed in the latest fashions, engaged in various (sometimes sexual) activities of leisure, and his kabuki actors and characters drawn from the capital city’s everyday life saw him as being regarded as the master of ukiyo-e and was widely imitated. The influence of Hokusai in the West can be seen in the works of Degas, Monet, Gauguin and Whistler, as well as in the development of Art Nouveau in Europe. Hiroshige, unlike most ukiyo-e artists who tended to focus on the beautiful women of the entertainment districts, is best known for his landscapes, such as the series The Fifty-three Stations of the Tōkaidō and The Sixty-nine Stations of the Kiso Kaidō; and for his depictions of birds and flowers.

These prints proved immensely popular among the capital’s growing urban and affluent population as tourism and travel became prime activities of leisure for the Edo middle classes, particularly amongst merchants. If Hiroshige was bringing ukiyo into the rural sector, Kunisada was very firmly within the back streets of the pleasure districts.

While much of his art was of the beautiful women and kabuki stars of the day, he was always very much at the vanguard of his time, continuously developing his style, not adhering to stylistic constraints set by any of his contemporaries. It was this ability to both predict and move with fashions and phases that made him one of the most commercially and financially successful artist of his time.

It is perhaps due to this commercial outlook that he has been derided for his work in western media, with some critics denigrating his pursuit of fame over artistic valor.

Takiyasha the Witch and the Skeleton Spectre

One designer who was considered to be at the highest end of his art was Utagawa Kuniyoshi. Perhaps something akin to the punk rocker of the ukiyo-e world, Kuniyoshi often covered kabuki actors and beautiful women in his work, but it is his depictions of mythical creatures, historical samurai battles, and cats that really make him stand out.

Having fallen on hard times, a chance meeting with the vastly more successful, yet equally less able Kunisada caused him to redouble his efforts, expanding his artistic style into heroic triptychs. His warrior prints were interesting in that they depicted legendary figures with an added stress on dreams, ghostly apparitions, omens, and superhuman feats, thematic styles that satisfied the public’s interest in the ghastly, exciting, and bizarre that was growing during the time. Widely considered the last great master of the ukiyo-e genre Yoshitoshi is also regarded as one of the form’s greatest innovators. His career spanned two eras – the last years of Edo period Japan, and the first years of modern Japan following the Meiji Restoration

Many of Yoshitoshi’s prints of the 1860s are depictions of graphic violence and death as Japan experienced the breakdown of the feudal system imposed by the Tokugawa shogunate. Yoshitoshi began making violent sketches, eventually incorporated into battle prints designed in a bloody and extravagant style which not only gave him a notoriety, but also captured the public’s imagination at the time.

Later, after a time in the commercial doldrums Yoshitoshi returned to infamy with a series of bijin-ga that caused him political trouble as it depicted female attendants to the Imperial court, identifying them by name. It may be that the Empress Meiji herself was displeased with the style of her portrait in the series.

Image by Hiroshige (Own work) [Public Domain], via wikipedia.com (modified)

Image by Kunisada (Own work) [Public Domain], via wikipedia.com (modified)

Image by Utagawa (Own work) [Public Domain], via wikipedia.com (modified)

Image by Yoshitoshi (Own work) [Public Domain], via wikipedia.com (modified)