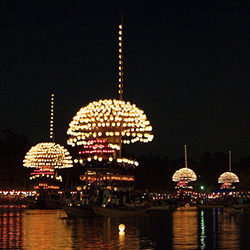 If Kyoto’s Gion festival is the biggest of the summer festivals, the Owari Tsushima Tenno Matsuri in Aichi is perhaps the most spectacular thanks to its beacon of shining lights floating down the Tenno river.

What is the Tsushima Tenno Festival?

For 500 years people have been braving Aichi’s mid-summer humidity and flocking to the banks of the Tennogawa to see this glorious summer spectacle, the highlight of which is the sight of five brilliantly illuminated ‘makiwara-bune’ boats gliding through the gently undulating water. Designated as one of the National Important Intangible Folk Cultural Assets in 1981, it takes place on the fourth Saturday and Sunday of July.

The festival begins on Saturday 10:00 when the portable Mikoshi shrines are moved from Tennogawa Park to Tsushima Shrine, and people will begin to gather throughout the day, staking their claims on the river banks, eating and drinking from the yatai food stalls. However it does not begin in earnest until early evening with the ‘yoi-matsuri’, or night festival.

At around 18:00 there are demonstrations of matchlock weapons, shamisen (a Japanese string instrument kind of like a banjo) as well as other traditional Japanese arts and music. At 19:00 teams begin to light lanterns that are attached to the boats and amidst a fireworks display the boats set sail down the river, floating serenely towards the Tennogawa park, before returning.

This is the highlight of the festival, and for many people, of the whole summer.

The next day is the asa-matsuri, the morning festival, where six boats this time (the five from yoi-matsuri and the “Ichieguruma” boat from nearby Higashiho-cho) sail from 9am. The boats are redecorated with black and gold handmade tapestries, and atop each boat are okimono dolls in Noh performing arts costumes, and bands playing traditional music. Upon arrival around 45 minutes later men carrying halberds made of cloth dive one by one from the Ichieguruma into the water, swimming or walking to shore. Then each boat’s ‘chigo’, a sort of semi-deified mascot child, dismounts from the boat and after the boats have returned they perform kagura music at 11:30.

History of the Tsushima Tenno Festival

While there is agreement that the festival began around 500 years ago, there are conflicting opinions on how it first came about. Some say it is simply a Shinto ritual, others say it is to honour the deity Gozu Tenno and some say it is a festival based on Kami-mukae, a welcoming of the gods in the hope of avoiding the various diseases that abound in the hot muggy summer. Another story still tells that it comes from the Nambokucho period (1336-1392) when the rival Northern and Southern Imperial courts of Kyoto and Yoshino respectively were battling for supremacy. The story goes that Prince Ryou, the grandson of Southern emperor Go-Daigo, had escaped to Tsushima, and the local warriors subdued his Northern pursuers by a boating invitation on the Tenno river.

Whatever the truth, the Tsushima festival has a long and illustrious history, and it was believed to be a particular favorite of the great warlords Oda Nobunaga and Toyotomi Hideyoshi, so much so that the latter considered replicating the festival near his Fushimi Castle in Kyoto.

The floats of Tsushima Tenno Festival

The most remarkable part of the festival is of course the five makiwara-bune boats that represent the five villages that made up Tsushima. They are of quite remarkable design, particularly for the yoi-matsuri. The floats are made from two boats lashed together by purified ropes and built up to represent a mountain (though looks more like a brilliantly glowing mushroom cap). Around the central passenger carrier level hang thirty red lanterns called ‘miyoshi-nagashi’ to represent the days of the month. Above that is the ‘nabezuru’ where are placed 365 lanterns in a dome shape to represent the days of the year, and on top of all this is a pole lit by 12-13 lanterns for the months (the 13th is for leap years). It is this cacophony of light, combined with the explosions of fireworks overhead, that really makes this festival something not to be missed.

Getting to the Tsushima Tenno Festival

Transport: JR Kansai Honsen Line to Yatomi and change to the Meitetsu Tsushima Line to Tsushima, or directly from Meitetsu Nagoya through Sukaguchi. It is a 20 minute walk from the station; By car 15 minutes from Yatomi Interchange on route 155