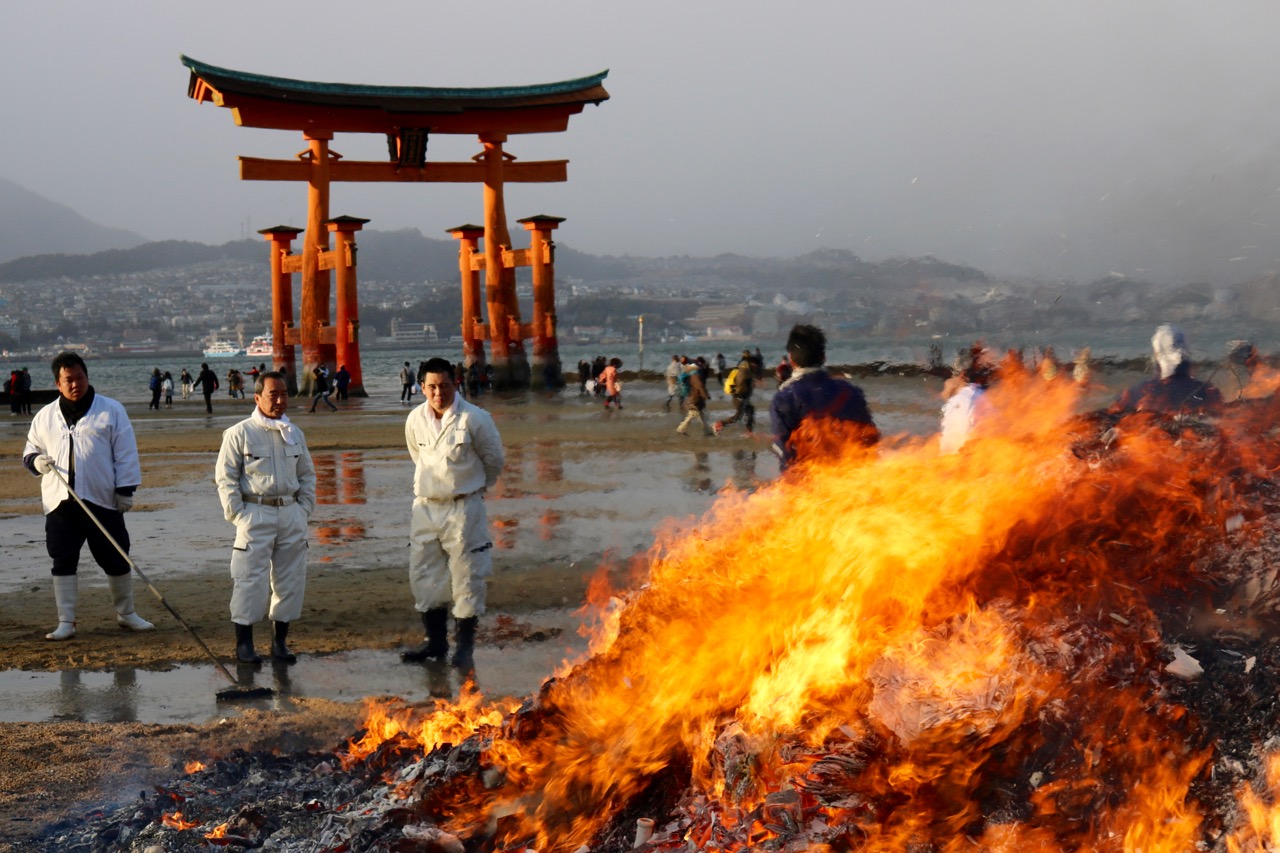 Across Hiroshima Prefecture, early to mid-January involves one final, festive bit of housekeeping with regard to the year just passed. Part of ‘Koshagatsu,’ which marks the traditional lunar new year, it’s called the Tondo festival. In public parks, school grounds and shrine courtyards, people gather around towering bonfires of bamboo, on which they throw the ‘shimekazari’ New Year’s ornaments that appear each December above the doors of homes and businesses. At shrine events, you may also see celebrants tossing on last year’s ‘hamaya’ arrows and other talismans, shutting the door decisively on the old year.

Many Tondo are relatively small local affairs, and can be a great way to interact with your neighbors. When the fire is lit, whether by local firemen or by children bearing long torches and assisted by adults, the results are dramatic. The bamboo kindles quickly, and the flames leap high into the air. Because of the air pockets in the hollow stems, the fire produces loud pops and the occasional small explosion that sends children squealing behind the nearest adult.

Usually, you’ll find something to nibble on nearby. You may have the chance to take a turn at the stone mortar where ‘mochi’ rice cakes are being made, the steamed rice pounded repeatedly with large wooden mallets until a smooth paste is achieved. This is quickly formed into cakes and either grilled, sometimes over the remains of the bonfire itself, or simmered in a thick bean soup called ‘zenzai,’ a classic taste of winter in Japan. There may also be hot tea and warm cups of sweet sake to ward off the chill.

Because of the community aspect, it might be worth asking around to find out if there’s a Tondo festival in your neighborhood. But a number of larger events around Hiroshima city and its environs are destinations in their own right, drawing large crowds and taking on a more elaborate atmosphere than some local Tondos. Here are a few of the better ones.

Within the grounds of Hiroshima Castle, this large shrine’s Tondo festival is one of the most popular in the city. Unlike some other festivals, this one is always held on January 15th, no matter the day of the week. Expect large numbers of spectators and a more festive feeling. Fun features are the firemen dressed in traditional garb and the mochi that’s grilled on long poles held over the embers of the fire before being distributed to the crowd.

Place: Gokoku Shrine grounds, within the walls of Hiroshima Castle

At the UNESCO World Heritage Itsukushima Shrine, the Tondo takes place at low tide on the stretch of sea-damp sand between the shrine itself and its famous torii gate. This is a pleasantly unpretentious affair, and the impression I’ve often had is that most visitors happen upon it by luck. The combination of sea, fire, open air and crimson shrine architecture make quite a magical combination. The Tondo festival at this small shrine a short walk northwest of Hiroshima’s Peace Park, on the west bank of the Ota River, strikes a nice balance between a small neighborhood festival and one that welcomes visitors from farther afield. The festival actually takes place in a small adjacent park and playground, making it a good choice for families with children. If you want a more intimate atmosphere than you’ll find at Gokoku Shrine, and something closer to the city center than Itsukushima, head to Sorasaya Shrine.

All photos courtesy of the author