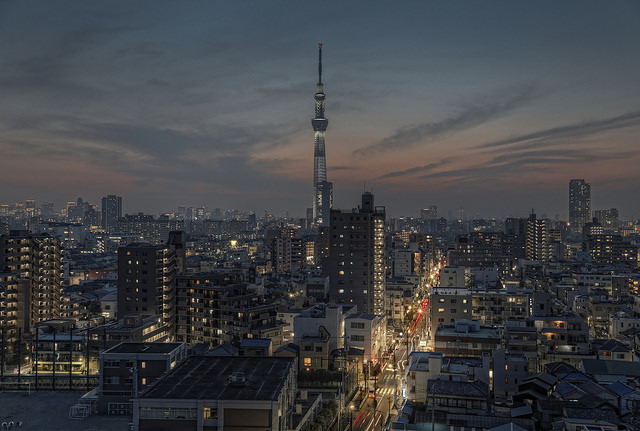 Whether you love or loathe the hustle and bustle of the big city, there are no two ways about it: Tokyo is amazing. There is so much going on and so much to take in. It is a mass of contradictions and hodge-podge of contrasting styles, of the traditional and the futuristic.

There is perhaps no better way to take all of that in than from the air, as Tokyo has one of the most breathtaking cityscapes in the world. All around the city, there are high-rise buildings that you can access, and from their observation decks, you can take it all in.

There is no other place for us to begin than with Japan’s tallest structure. At 634m, Tokyo Skytree became the world’s tallest tower and the second tallest building when it was constructed in 2012. As such, it has the two highest observation decks in the country. The top deck is 450m high, and the lower deck is 350m, the latter of which boasts wide windows, a restaurant, cafe, and shops. Both decks afford an unrivaled and unobstructed view of much of the Kanto region. The focal point of the Roppongi Hills complex, the 238m tall Mori Tower, is startling for its bold, glittering design, and easily embodies the glitz and glamour of the Roppongi district. On cold or windswept days, views of the city can be taken from the 52nd floor, but the best are from the open-air Sky Deck on the roof of the building that offers panoramic views of the city.

At 240m high, when completed in 1978, Sunshine 60 was not only the tallest building in Japan but in Asia generally. Part of the adjoining Sunshine City complex, the building is 60 stories (hence the name), and on the top floor, there is an observation deck from where you can take in the view. However, being in Ikebukuro, it isn’t the most central of buildings meaning the views are not quite so devastating, though they are impressive nonetheless.

The building that took the crown for the tallest building from Sunshine 60 is the Tokyo Metropolitan Government Building in 1991. Also referred to as Tocho, it stands at 243m, although the observation deck is some 41m below that. Still, being in the center of Shinjuku, it affords some quite spectacular scenes including Meiji Jingu, Tokyo Tower, Tokyo Skytree, and Mount Fuji on clear days. Also, it’s open late, providing an opportunity to see the city at night. Oh, and it’s free! Short but sweet is possibly the best way to describe the Bunkyo Civic Center. Although only 146m high (to put that into perspective, stand three of them on top of each other and you still can’t top the Skytree), its location makes for perfect viewing. From the 25th floor of this building once rather accurately described as a ‘giant Pez candy dispenser’ by The Japan Times due to the way the observation deck juts out, you can see quite breathtaking views of Mount Fuji behind the skyscrapers of Shinjuku on one side, and the Tokyo Skytree on the other.

Before the construction of the Skytree, Tokyo Tower was perhaps the emblem of the city. When completed in 1958, it symbolized the rebirth of Japan as a post-war economic power and was inspired by the Parisian Eiffel Tower, which stands a good 13m shorter. It is so tall that it is painted orange and white to comply with air traffic regulations, and is the second tallest structure in the city. The tower has two observation decks, the main observatory at 150 meters and a special observatory at 250 meters.