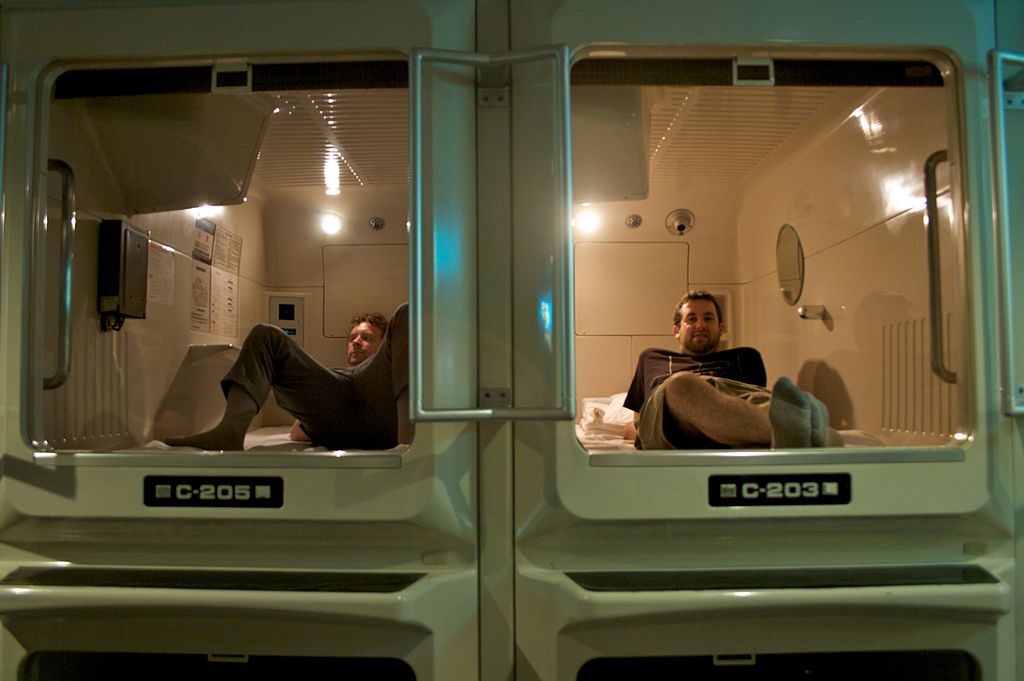 Celebrated Japan architect Kisho Kurokawa gave the world its first taste of mass pod living in 1972 with the creation of the Nakagin Capsule Tower in Tokyo. The idea was to give hard-working traveling businessmen a convenient place to bed down for a few hours before getting back to the meeting room.

Seven years later the first capsule hotel opened in the Umeda district of Osaka. Instead of hard-charging business people, the clientele was often hard-partying revelers who could sleep off the night’s activity cheaply and safely without trying to drive home drunk. Others would check in to the capsule hotel for the affordable rates or just for the experience.

Compared to the interchangeable pods of the Nakagin Tower however, the accommodations of a capsule hotel are claustrophobia-inducing. The capsules are manufactured of fiberglass and stacked one row upon another and lined up like adjacent filing cabinet drawers. Each sleeping capsule is roughly two meters long by one meter wide. There is no room to stand up but the guest can sit up and roll about comfortably. Some hotels have larger capsules and even small rooms available.

How Does A Capsule Hotel Work?

Guests check in at the reception room and are assigned a capsule and given a wristband with the capsule number on it. The wristband is to be worn at all times since everything ordered in the hotel will be charged to that number before checkout. The next stop is the changing room where a locker corresponding to the capsule number awaits. All clothes and belongings are left here and guests change into a robe and pick up towels and various sundries.

Most capsule hotels are outfitted with a restaurant area and many have spa facilities with accompanying massage service. There is no smoking, drinking or eating in the capsules so everything bought in these areas must be consumed there as well. Before turning in for the night you may also wash your clothes or take advantage of dry cleaning services in some capsule hotels.

Quiet is mandatory once you arrive in the capsule room. Short steps are used for accessing the capsules on the second level. A screen is pulled down across the entrance to provide privacy once inside the capsule.

How About the Amenities?

You can expect a double mattress, an assortment of pillows and a covering for comfort. Almost all pods these days come equipped with a television, free WiFi, an electric socket and AV controller. Alarm clocks are usually standard. For safety there will be a sprinkler and ventilation fan. Everything you need for a good night’s sleep.

Capsule hotels fill a niche for the thrifty traveler and there are enough around Kansai to offer consumers a choice. The First Cabin Midosuji Namba is a newer generation of capsule hotel with roomier “cabins.” The B&S Eco Cube Shinsaibashi offers a women-only floor.